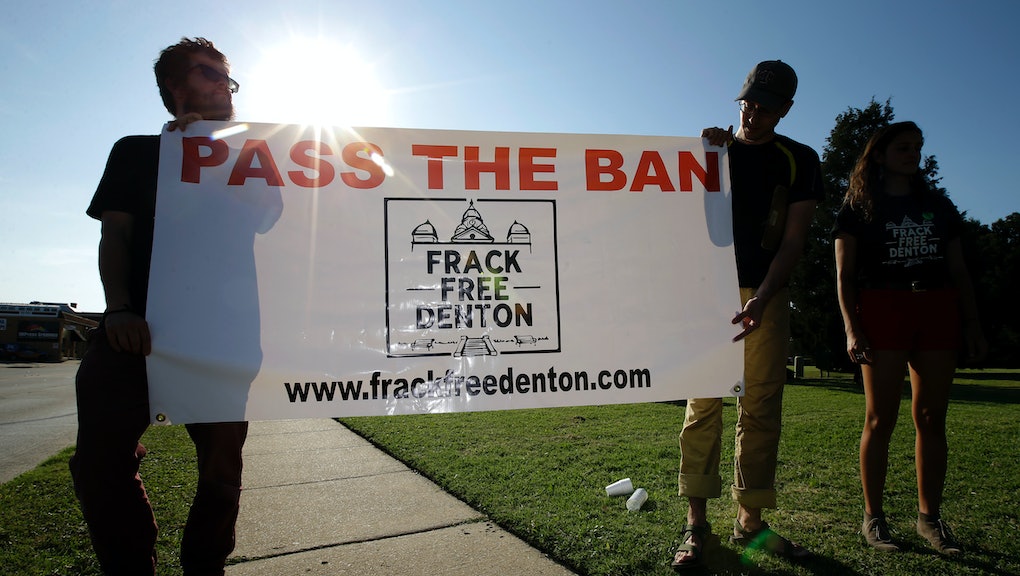 The news: In Denton, Texas, fracking just got fracked.

The town where hydraulic fracturing, or "fracking," first started just voted to ban the practice within city limits. According to the (unofficial) election results on the municipal website, more than 58% of voters voted in favor of halting the fracking rampage that began in their very city.

The city of 113,000 people is both blessed and cursed by its location above the Barnett Shale, one of the largest natural gas fields in the country, measuring more than 5,000 square miles. Judging by the 270 gas wells in the city, oil and gas companies were more than happy to take advantage of that proximity. As the Guardian notes, oil-hungry petroleum companies "drilled wells on church property, school grounds and on the campus of the University of North Texas, right next to the tennis courts and across the road from the sports stadium."

The Denton Record-Chronicle reports that pro-fracking group Denton Taxpayers for a Strong Economy raised $700,000 to fight the ban, including $95,000 from Chevron and Occidental Petroleum.

"The responsible citizens of Denton have spoken — loudly and clearly," Ed Soph, treasurer of Pass the Ban, told the Denton Record-Chronicle.

The empire can still strike back: The Texas General Land Office is seeking an injunction to stop the ban from being enforced, on the grounds the ruling violates the Texas state constitution. Other groups, like the Texas Oil and Gas Association (TXOGA), plan on fighting the ban in court as well.

TXOGA attorney Tom Phillips told the Associated Press that courts have to "give a prompt response and authoritative answer" on whether Denton residents had the authority to ban fracking.

"We believe the city of Denton lacks authority to ban the only commercially viable method of producing oil and gas in their locality," Phillips said.

Residents make themselves heard: "I couldn't sit on the back porch because I couldn't breathe," Debbie Ingram, a Denton resident, told the New York Times.

"It should send a signal to industry that if the people in Texas — where fracking was invented — can't live with it, nobody can," Sharon Wilson, Texas organizer for environmental nonprofit EarthWorks, told the Guardian.

The takeaway: If the birthplace of fracking has had enough, that might indicate that the tide of public opinion has finally turned against the environmentally invasive practice.

For now, at least, Denton has joined a chorus of voices stretching from Ohio to California : They want fracking gone.