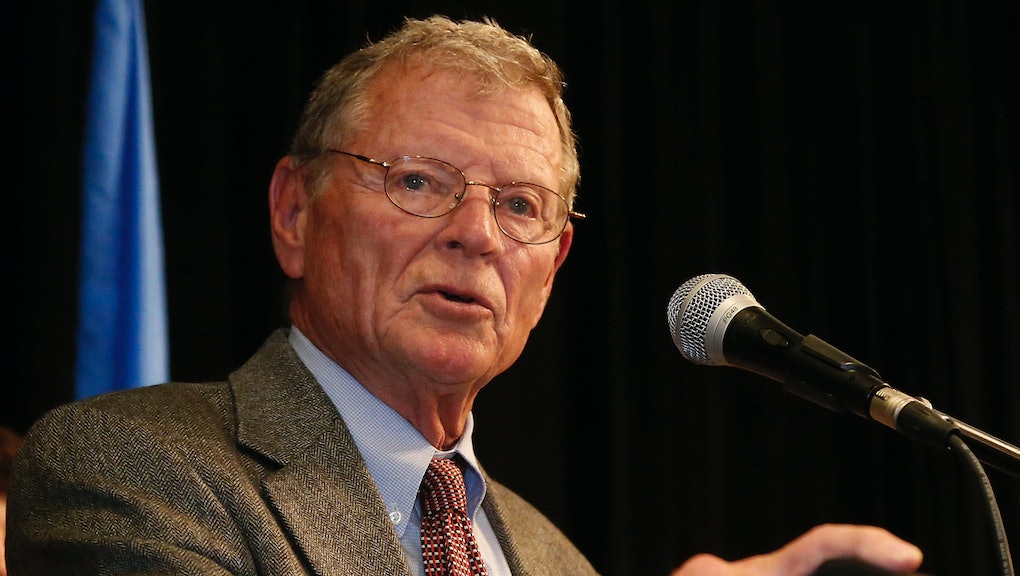 Individual Senate seats weren't all that Democrats lost in Tuesday's elections. They also lost control of the powerful committee chairmanships that influence how policy is made and which legislation is debated. And environmental policy might suffer the most.

When the new Congress takes over in January, say goodbye to Democratic proposals to combat climate change and say hello to Oklahoma Sen. Jim Inhofe, the Republican who is expected to take over the Senate Environment and Public Works Committee.

Inhofe has long denied that humans are responsible for climate change, even in the face of overwhelming evidence to the contrary. The New Republic has described the Republican as "the worst science-denier in national politics," and Inhofe has consistently asserted ideas that contradict environmental science. As recently as July, Inhofe blocked a resolution in the Senate that would have simply acknowledged that climate change exists.

His views are nothing new. In 2003, he even went so far as to claim that global warming might be helpful to humans. "Thus far," he said, "no one has seriously demonstrated any scientific proof that increased global temperatures would lead to the catastrophes predicted by alarmists."

Even in the face of more recent findings that climate change is caused by human activity, Inhofe hasn't budged. The U.N. Intergovernmental Panel on Climate Change revealed in a report released Nov. 4 that "human influence on the climate system is clear" and "the more we disrupt our climate, the more we risk severe, pervasive and irreversible impacts." This scientific research directly contradicts Inhofe's hypothesis that "much of the debate over global warming is predicated on fear, rather than science."

The soon-to-be environmental leader has even written a book on the topic. In 2012, the senator released The Greatest Hoax: How the Global Warming Conspiracy Threatens Your Future, in which he argued that climate change science is a liberal scare tactic and that regulating greenhouse gases is unnecessary.

This, America, is the man we'll soon be looking to for leadership on environmental policy in the Senate. His opinions largely go against the grain of the majority consensus, both from the global science community and an estimated 2 in 3 Americans.

Inhofe's new leadership is yet another consequence of the Republican takeover and further evidence that Tuesday's elections were not just a popularity contest. The votes cast have real impacts, both on society and, in light of Inhofe's expected appointment, on the world.

So much for protecting the planet.