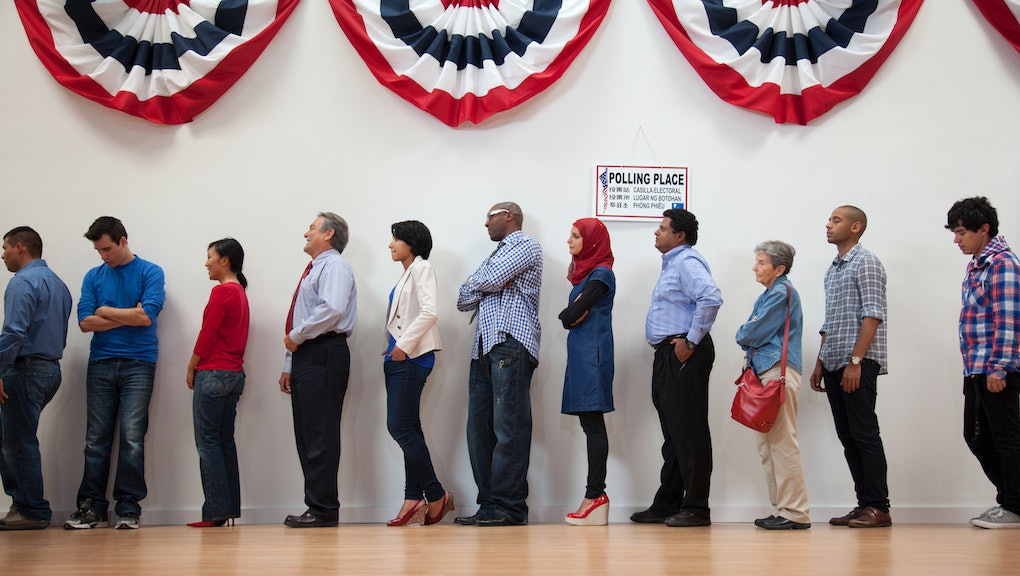 The Eternal Paradox of Race and Politics, in One Quote

In the wake of the Republicans' domination of the midterm elections, the public is hungry for an explanation of how a party that was reeling two years ago is suddenly in control of both houses of Congress. The commentariat is awash with countless theories of how President Barack Obama and his party fell from grace. But sometimes there's a statement that manages to pierce the din and allows us to see the big picture with greater clarity than a thousand blog posts combined.

Ronald Brownstein, a widely respected political analyst at the National Journal, wrote the following in his analysis of the tectonic plates underlying the midterms the day before the elections, and it held true the day after:

The tale of two electorates: Brownstein is commenting on the phenomenon of the two electorates governing modern American politics — the one that votes during presidential elections and the one that votes during midterms. As he's pointed out, the presidential electorate has awarded Democrats the popular vote in five of the past six presidential races, and the midterm electorate have usually favored Republicans since 1994. While vagaries in the political and economic climate play a role in shaping outcomes, the crux of the matter demographically is that the minority and young voters that deliver results for Democrats tend to sit out during midterm years.

Explaining their withdrawal during midterm years is complex, but one intuitive explanation is that constituencies that feel more estranged from the technocratic working of government — how many people can name their representatives? — feel less motivated to vote unless a big personality with a tangible agenda of reform can captivate them. They're in greater need of the sensation of sea change. Conversely, white and older voters are more likely to have a stake in the status quo, and more likely to have faith in midterm voting for largely faceless representatives who execute a predictable party line.

Furthermore, minority and younger voters have a harder time voting than most — voting requires taking time off school or work — and they're disproportionately affected by registration complications, longer wait times and voter ID laws. In other words, the exact crowd that needs an extra source of motivation to vote faces extra barriers to the voting booth.

Are the parties just proxies for race? Democrats and Republicans both have the opposite race problem, and this serves as a powerful explanatory lens into what they represent. Strip away the rhetoric about freedom and debates over whether the U.S. should rule the world with a big stick, and a great deal of the differences in the parties can be distinguished by how likely they are to execute on a vision that's more racially inclusive.

Republicans and Democrats' differences on taxes, immigration, working conditions, health care and so on can't be reduced to race, but one party consistently leans toward execution of policy in those realms that benefits people of color. Voters of color recognize this and reward this tendency when they see a prospect for this can be advanced by someone pursuing the White House.

Where did class go? Perhaps most fascinating of all is what Brownstein doesn't mention: class. America's political vernacular very rarely engages with class on explicit terms; instead voters discern it through subtext and code, refracted through concepts like geography (coastal elites vs. middle America) and race (welfare, the War on Drugs) and culture (gun control).

The demise of organized labor in economic life and the two-party consensus on free market principles instilled during the Reagan era have made it so that today there's no discussion on issues of class and fairness that Democrats once championed earlier in the 20th century. For example, the poor and their collective political interests as a class are simply nonexistent.

The financial crisis and the Occupy movement's introduction of the 1% vs. the 99% did allow some blunt conversation about inequality to surface in the public square, but overt discussion of class is still the exception to rule. This is tragic because the American public is dissatisfied with the economy, and unless we candidly discuss economic justice, the extremely wealthy will keep shaping an economy that serves their interests at the expense of the rest of us.

Brownstein's remark is a valuable reminder of the foundational differences between parties — Democrats strive to be more inclusive toward those that would remain in the margins if the Republican Party always had its way. But it's clear that identity politics has its limits, and that as a society we need to learn to talk about class again if we want to create consciousness for workers and an economy appropriate for a democratic society.