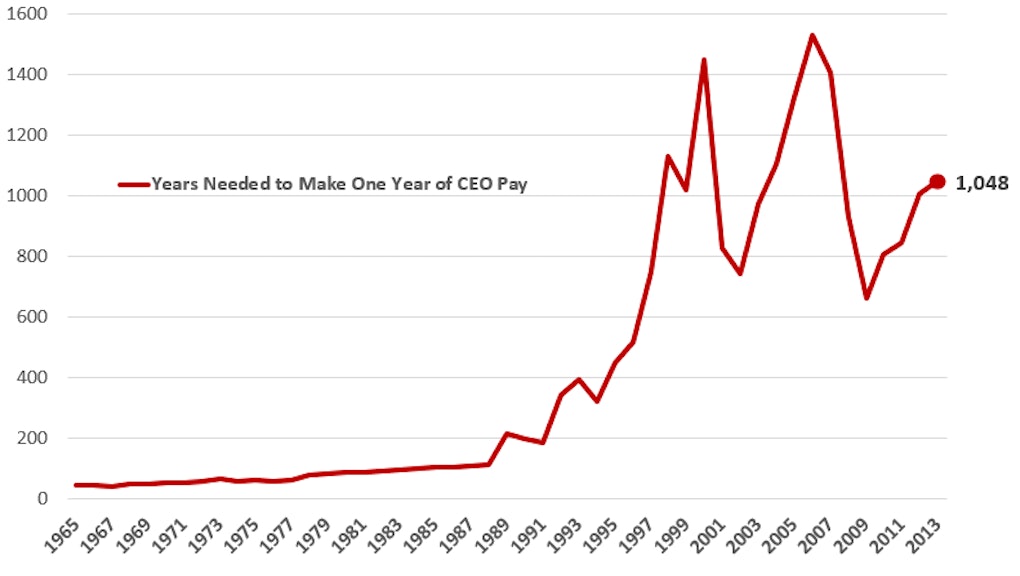 Consider this: In 2014, a worker making the federal minimum wage would need to spend more than 1,000 years on the job — no sick days, pal! — to earn what the average CEO makes in 12 months.

That's according to a recent analysis by the Economic Policy Institute, which makes clear that economic inequality is growing at a staggering rate in America. Between 1978 and 2011, average executive compensation jumped 725%. During the same period, the average worker saw just a 5.7% increase.

For the millions of Americans making the federal minimum wage, now $7.25 an hour, the gap is even wider.

Look no further than this graphic, which illustrates a remarkable 50-year trend in which the annual income of the minimum wage worker falls dangerously far behind what the average CEO collects in the same time:

The sharp dips came during recessions, when CEO pay took a hit along with the rest of the economy. CEO compensation peaked in 2007, when the average chief executive raked in $18.5 million before falling during the financial crisis and the onset of the Great Recession. It's now on an upward trajectory yet again.

It doesn't have to be this way: There has always been a significant disparity in pay between workers and corporate executives. That's an unfortunate fact of life in a capitalist economy. But from the mid 1960s right through the late 1980s, the figures, all adjusted for inflation and accounting for a slow-rising wage floor, were pretty consistent.

Was it ever fair? Not even close. But until the late 1970s, the average minimum wage worker could still hope to match his or her CEO's annual income in a single lifetime's worth of work:

A quarter-century of shame: Financial deregulation, globalization and the resulting devaluation of the "middle-class worker," along with simple greed — all of it signed off on by both Democratic and Republican administrations — are just a few of the driving factors. Many are still unknown or difficult to fathom. When a French economist's nearly 700-page book about economic inequality becomes a mainstream U.S. bestseller, you know there's a problem. People are looking for answers.

As a first step, we should raise the minimum wage, but we shouldn't stop there. Inequality is a problem from two directions: The poor stay poor, and the rich get (much) richer. To truly reduce the inequality gap, we need to cap executive compensation at a sane level.

And the charts above are a great reminder of how ridiculously high the average CEO's compensation is, while those at the bottom of the pay scale struggle to make up ground. The goal isn't to punish the rich. But for our system of democracy and capitalism to work, the benefits need to go to the many, not just those at the very top.