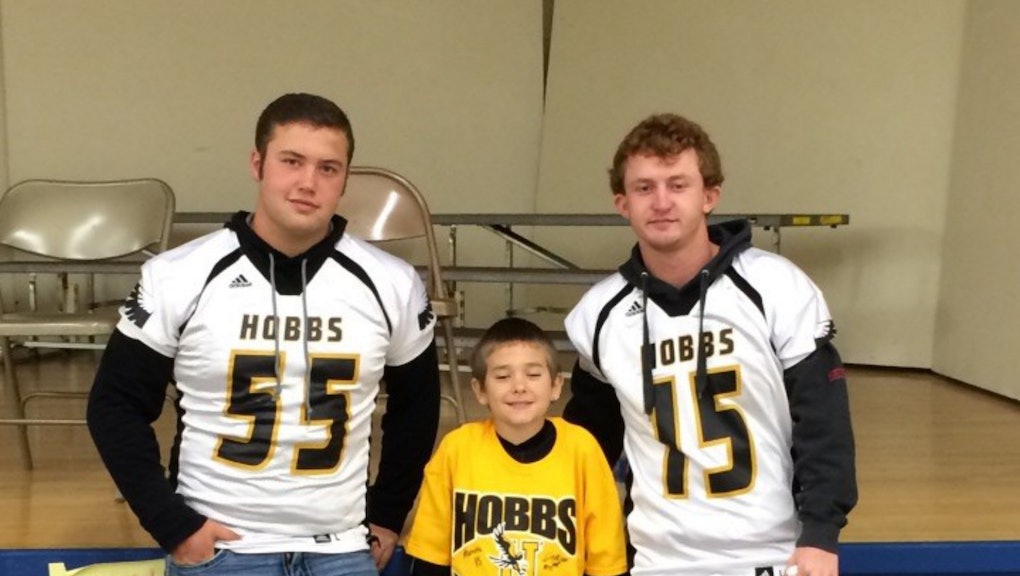 The news: When you see the words "football players" and "bullying," this heartwarming story probably wouldn't be your first guess as to what happened.

But a local news station in West Texas reported last week that a group of high school football players in Hobbs, New Mexico, formed an anti-bullying squad, called the Eagle Buddies. Their mission: to cheer up elementary school children being bullied and help them regain their self-confidence.

It started when Chris Kuykendall heard about Keison, a 5-year-old, being bullied. The varsity football player decided to help Keison by bringing him an autographed football and having lunch with him.

"Going to that lunch it was just like fun, you know, seeing his face just light up when you walk in there and seeing him happy, him getting that football. He was happy and it just blew up after that, like everyone started volunteering and like all of the parents just wanted it to happen, you know," Kuykendall, who started the program, told NewsWest 9.

"Yea that's another thing about it, it's not like you're just going to go and just have lunch with them and it's just like that's the end of it," Kuykendall explained. "We keep in contact with them, we talk to them still they basically get a friend for life."

Bullying has real, physical effects. While the mental effects of bullying may be clear, there are also physiological complications to consider, especially among developing children.

For instance, earlier this year a U.K. study found that those who experienced frequent bullying had not only social and mental health problems, but poorer physical health and signs of early aging as well. Researchers see this as evidence that "bullying really gets under the skin and affects the biology at a cellular level."

"When we compared the effects to other childhood adversities such as being put in care, abuse by an adult or neglect, it is of the same scale. It is should be put in the same bracket," said Louise Arseneault, a senior author of the study. "Some children will be set on a pathway towards problems for the rest of their lives. We need to take bullying seriously and do all we can to prevent it and help those children when it does happen."

According to estimates, over a quarter of American students in grades six through 12 have experienced bullying. It's a real, dangerous problem that affects thousands of kids across the country in classrooms and through the Internet. And even small gestures, such as a popular high school jock volunteering to spend a few hours with a bullied student, can make a big difference.