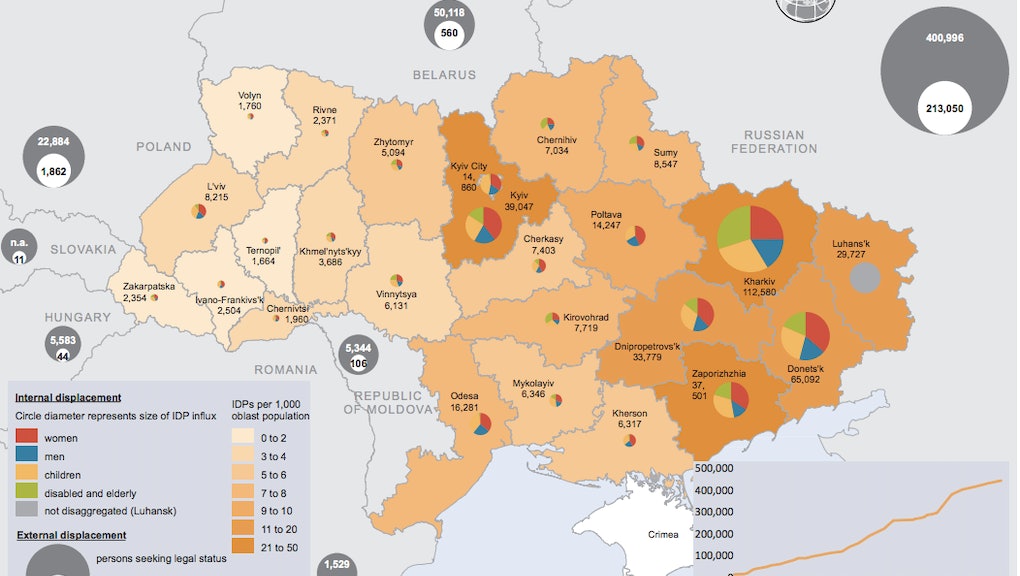 The news: The U.S. midterm elections may have been a congressional bloodbath, but on the other side of the world, there were elections in a much more politically fraught environment: the disputed Ukrainian territories of Donetsk and Luhansk.

On Sunday, pro-Russian, separatist leaders in those states held their own elections, which have not been recognized by other countries aside from Russia. But while news coverage of these elections has centered on their potential impact and the response from the international community, it has overlooked the plight of refugees in this heavily contested region.

According to the UN Office for the Coordination of Humanitarian Affairs, around 430,000 people have been displaced so far by the ongoing separatist movement, while roughly 5.2 million live in areas affected by the conflict. Nearly all of the displaced people — 95 percent — fled from eastern Ukraine, especially around Donetsk, Luhansk and Kharkiv.

Why is this important? While separatists and the government forces in this region have focused on the election, hundreds of thousands of people have been displaced by the conflict, and that's a conservative estimate. And though many of them have found places to rent or are staying with friends and family, at least 14,000 are living in refugee camps as winter approaches.

This humanitarian issue is something that hasn't been addressed by either the candidates or the international news media scrutinizing the results. Thousands of people in the Ukrainian region have no homes that they can go back to — and that's a reality that can't be ignored.