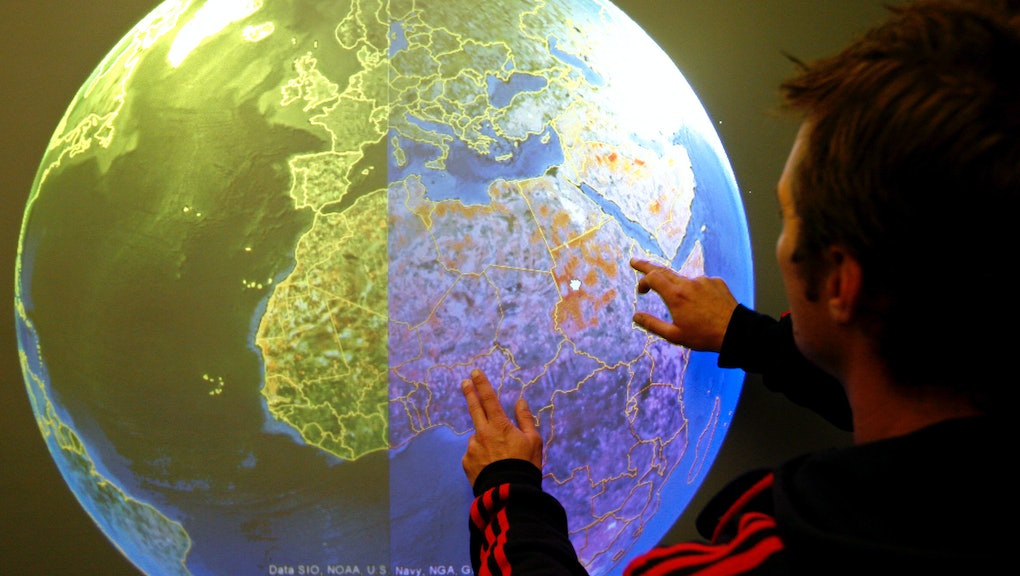 Deepening income inequality and persistent jobless growth lead the top 10 trends of 2015, according to the World Economic Forum's Outlook on the Global Agenda released Friday.

Growing political and environmental concerns, along with the lack of leadership and weakening of representative democracies, join the year's survey of challenges facing the world in 2015.

The report identified several trends based on a survey of almost 1,800 analysts within the World Economic Forum's network of policy experts and economists. The central question: What issues will preoccupy world leaders over the coming 12-18 months?

The economic landscape is abstract and solutions vary by country. These charts and maps that make sense of the top 10 trends:

Income disparity is prevalent in both developed and developing countries where the poorest half of the population often control less than 10% of its wealth. Worsening income inequality tops this year's list of top 10 trends of 2015.

"Inequality is one of the key challenges of our time," wrote Amina Mohammed, UN special adviser for the secretary-general and vice chair of the Global Agenda Council on Sustainable Development.

This fact is most glaring in developed nations like the United States, where the top 1% of the population receives a quarter of the income in the country.

While countries reeling from the global recession of 2008 have demonstrated considerable economic growth, many of them are merely maintaining their level of employment.

Though most economies have yet to rebound from both regional and global bouts of recession, there are achievable solutions for 2015. According to the report, investments are needed in education.

Schools, colleges and universities "must place a premium on doing the tasks that machines cannot do: collaboration, creation and leading," said economist Larry Summers.

"And at the same time, they must place less emphasis on the tasks that machines can do: the monitoring, calculation and execution."

World leaders did little to prevent the global economic crisis and have failed to address other global threats like climate change. As a result, about 86% of respondents say there's a leadership crisis in the world.

The United States is still the world's leading economic power, according to 45% of the respondents. But the U.S. is followed closely by China, Japan and the European Union as emerging nations and coalitions that will experience rising geostrategic competition in 2015.

"The prevailing view was that the world had moved towards a liberal, democratic consensus," writes Espen Barth Eide, World Economic Forum's managing director. "While the old Cold War is not making a resurgence, recent developments have led to tectonic shifts in state interaction."

Territorial disputes in the South China Sea, the Russia-Ukraine conflict and political upheavals in the Middle East and North Africa are upping the ante on geostrategic competition.

5. The weakening of representative democracy

The global economic crash in 2008 was a potent catalyst for the erosion of public trust in political institutions. Recent years have shown that citizens refuse to wait for change, taking their grievances to the streets and through mass demonstrations.

World Economic Forum member Jorge Soto writes that this an issue that resonates with those of his demographic: the world's youth. One of the latest examples is the protest in Hong Kong.

6. Rising pollution in the developing world

The industrialization of the developing nations is creating unsustainable pollution levels around the world while developed nations fail to regulate their carbon emissions. Rising pollution in the developing world is ranked as the sixth most significant global trend this year. In Asia, it is a ranked at third, manifest in severe air pollution in parts of India and China.

With little progress among industrialized countries, developing nations have a role to play. They "must stick to targets set for renewable power generation, ensure high-polluting industries are properly regulated, and promote clean energy," Ji wrote.

"What is needed is not just relief when disaster strikes, but adaptation to the massive effects these phenomena produce, including disease, political unrest and economic stress," Adil Najam, a member of the Global Agenda Council on Climate Change writes. "It's obvious that adapting to – or ideally, preventing severe weather events  — results in a better outcome for everyone."

Contrary to  headlines that depict nationalism in the Middle East and Southeast Asia, the survey reveals an unlikely part of the world where the passion for nation will be strongest in 2015: Europe.

Despite a rise of in nationalism in response to perceived incompetence in the EU, the report doesn't see an imminent dissolution of transnational unions. Former U.K. prime minister and chair of the WEC's Global Strategic Infrastructure Initiative Gordon Brown raised the example of the Scottish referendum to explain his qualms about intensifying nationalism.

"We don't need to sever connections between each other to thrive in the modern world," writes Brown. "Could the rejection of separation demonstrate that in this new global era nations can combine strong and vibrant identities with a willingness to engage in even deeper cooperation?"

The severe drought in California has brought the persistent issue of water scarcity around the world very close to home. Water scarcity, intensified by weather events like droughts, is also an issue of access, and climate change will undoubtedly create an added stress in places that lack access.

"Even where resources are plentiful, there are millions of people who lack access," writes Gary White, co-founder of Water.org. "While the United Arab Emirates has very little in the way of water resources, for example, they have the financial means to ensure the provision of clean water."

10. Growing importance of health in the economy

"There's a well-understood correlation that as the economy of a country improves, so the health of its citizens improves," writes Francis Collins, director of the National Institutes of Health.

According to the Pew Research Center, a median of 85% of respondents believe that access to health presents a challenge to their country. An estimated 50% of the economic growth differentials between developing and developed nations are because of poor health and low life expectancy, the World Bank reports.

"The healthier the citizens of a country, the more effective the workforce; the better the health of their children, the fewer births, and hence the fewer dependents," Collins wrote.