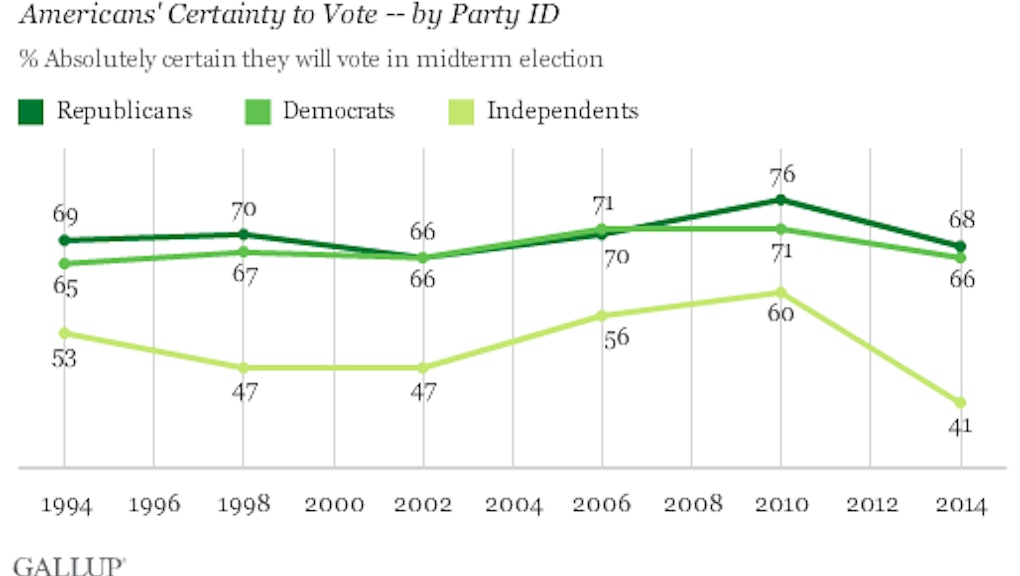 This Election, the American People Made History in the Worst Possible Way

The news: With an estimated turnout of 36.6% of registered voters, the 2014 midterm elections saw the lowest turnout of any election in the United States since 1942. That's more than 70 years.

According to early estimates by the United States Election Project, turnout increased compared to 2010 in only 12 states: Alaska, Maine, New Hampshire, North Carolina, Florida, Arkansas, Louisiana, Kansas, Colorado, Kentucky, Wisconsin and Iowa. Of those states, eight were home to the 10 most expensive Senate races in the country this year.

On the other hand, turnout was abysmal in California, New York, Ohio, Texas, South Carolina, New Jersey and Maryland, among others. All of those states set record or near-record lows, with no comparatively anemic turnouts in decades.

"We're probably going to have the lowest-turnout election [nationally] since 1942. It's that bad. And that was in the midst of World War II, when people couldn't vote because they were off at war," University of Florida professor and United States Election Project head Michael McDonald told the Los Angeles Times.

He added that only in those most competitive races was there "fairly robust turnout. If we look at where the campaigns were spending money and trying to encourage their supporters to vote, we do see higher turnout in those states — and we also see that the Republicans have stepped up their ground game and it does seem to be having an effect."

Why? Outside of a few high-stakes campaigns increasingly determined by their status as money pits, it's possible many voters have concluded the process is no longer worth their time and effort. In October, Gallup polling determined that voter engagement on key issues was lower than the past two midterm elections. On Election Day, Gallup found that less than half of voters had given much thought to the election, and there had been a 10-point drop in the number of people "certain" they'd vote since 2010. Independents in particular simply did not care much for the choices they had:

Gallup had a few explanations. One, the balance of power in Washington, D.C., is essentially unchanged except on more technical issues like nominating federal appointees. Two, there's no galvanizing issue for Democrats, "such as the Iraq War provided the Democrats in 2006 and 'Obamacare' provided the Republicans in 2010." Finally, party leadership isn't very inspiring. Democrats shirked the president this year, while party leaders in Congress, including Democrat Harry Reid, the Senate majority leader, and Republican John Boehner, the speaker of the House, are both very unpopular.

Why you should care: Even if national elections didn't really matter to many Americans, local and state ones do. California Democratic consultant Darry Sragow told Al-Jazeera America that "We threw an election and nobody came. I think that voters are clinically depressed. I mean, they're in despair. You would assume the despair would turn into anger and that would turn out the vote, but I don't think they really see choices that mattered a lot."

The divergence between high-pressure elections, which saw record amounts of outside spending, and everywhere else is far from encouraging. As the New York Times' Derek Willis noted, just 25% of all races accounted for 80% of all outside spending, likely because they were the only competitive ones. Locked-in seats in most districts and dirty campaigns backed by deep-pocketed super PACs in the few competitive races are not a good formula for democracy.