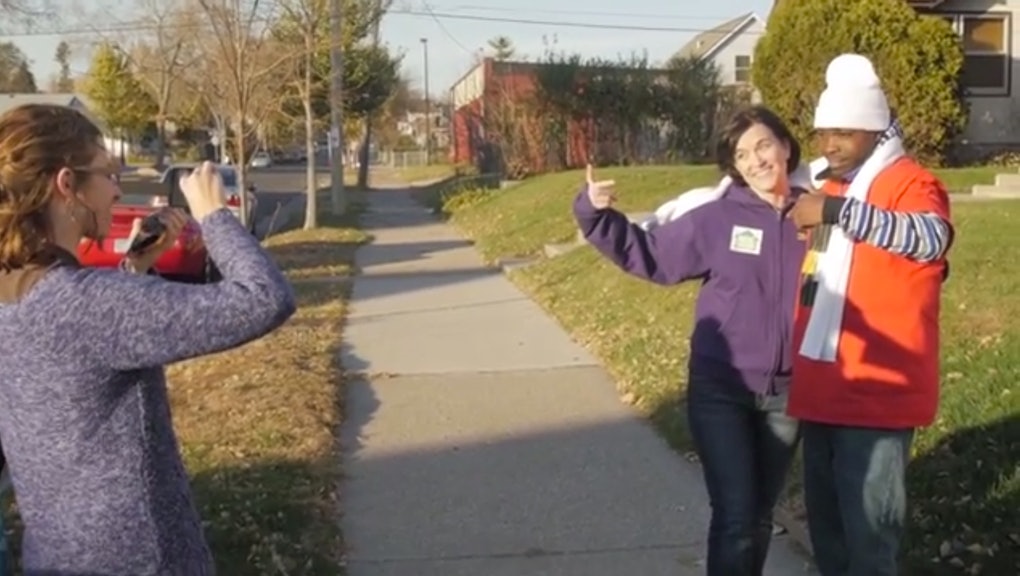 Pointing to Black People Is a Gang Sign Now, According to an Eyewitness 'Investigation'

Better start scrubbing your old Facebook photos — if the police see a picture of you pointing at a friend, they'll know all about your secret gang affiliation.

In one of the dumbest and most racially tone-deaf scandals in recent memory, Minneapolis Mayor Betsy Hodges has been accused of "posing with a convicted felon while flashing a known gang sign" because she and a black volunteer pointed at each other in a photo. And that's not an exaggeration — it's taken straight from the first sentence of the local ABC affiliate's coverage.

In their hard-hitting coverage, KSTP ABC 5 Eyewitness News cited law enforcement sources as saying that the picture "put[s] the public and police at risk."

The horror! "She's legitimizing these people that are killing our children in Minneapolis," retired Minneapolis Police Sgt. Michael Quinn tells the station in the video. "And I just don't get it."

According to KSTP, police found the photo on the man's Facebook page. They also note without a hint of irony that "there's no evidence he belongs to a gang."

If they had looked a little further, maybe they would have found that the photo in question was taken during an event for local charity Neighborhoods Organizing for Change. As Shaun King at Daily Kos explains, the man in question is volunteer Navell Gordon. You can see the pose 32 seconds into the video below, after he and the mayor awkwardly aren't sure what to do with their hands.

We've all been there, right? What's even crazier is that Janeé Harteau, the city's police chief, was at the same event. You can see her on the far left at the very beginning of the video. It was more than enough to warrant some scorn from Twitter.

Not the only ones: It takes a pretty shameless attitude at best — and an extremely racist one at worst — to take a photo of a mayor posing with a black volunteer and frighten viewers into believing she is legitimizing the killing of children by gangs.

Sadly, it's not a unique situation.

In August, Missouri Highway Patrol Capt. Ron Johnson was accused of flashing gang signs after he took over law enforcement duties in Ferguson, Missouri. It was actually a hand sign for his fraternity, Kappa Alpha Psi.

Hodges and Gordon's pose, of course, is even more basic than that. They're pointing! But that won't stop some media members and law enforcement officers from seeing scary gang signs (and scarier black men) everywhere they look.