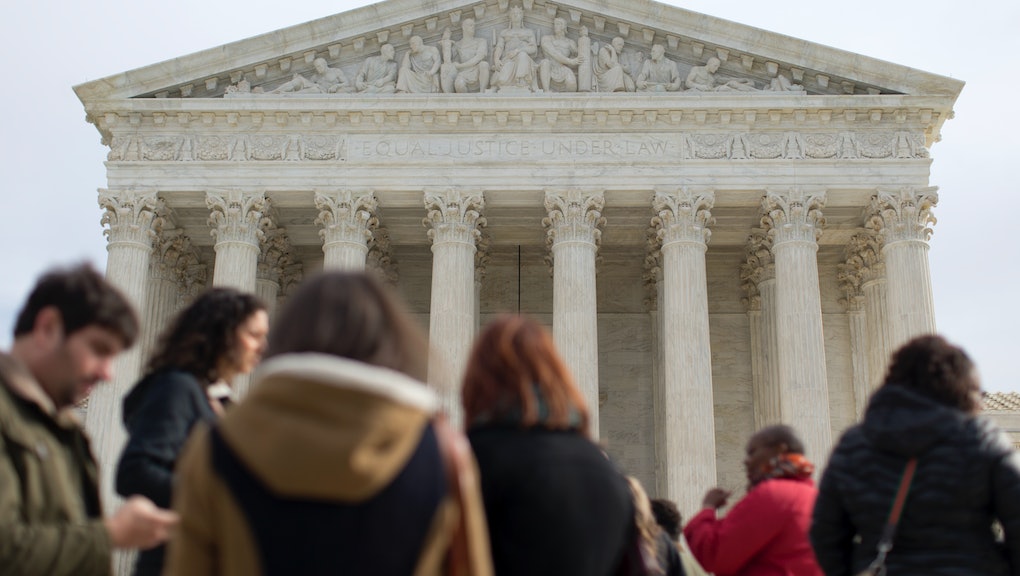 Obamacare is Headed Back to the Supreme Court

We're not done with Obamacare rulings at the Supreme Court — and an upcoming decision might be the most important yet.

The Supreme Court agreed Friday to hear King v. Burwell, a case regarding whether people in states that didn't set up their own health care exchanges under the Affordable Care Act can still receive federal subsidies.

The substance of this case is much different from from what we're used to hearing in the Obamacare debate. It doesn't involve major constitutional questions or accusations of federal overreach — just the meaning of four words: "established by the state."

The background: The law's text says that those who buy health insurance in a market "established by the state" qualify for tax credits. The Obama administration — and, by all accounts, everyone who wrote, worked on and passed the bill — understood that those tax credits would be available to anyone who gets insurance through any new exchanges.

But only 14 states set up their own exchanges, meaning the rest rely on the federally created exchanges. By a close reading, the argument goes, the law says that only people in those 14 states should be given tax credits.

It's a bold argument in its pettiness, but opponents of Obamacare aren't above a little semantic quibbling if it means dealing a blow to the law. The White House responded to the case with a statement calling it "just another partisan attempt to undermine the Affordable Care Act and to strip millions of American families of tax credits that Congress intended for them to have."

What's at stake: The U.S. Court of Appeals for the Fourth Circuit unanimously found that giving out the tax credits to everyone who participated was in line with how the law was intended. The courts usually put a degree of weight on intention to keep a misplaced word or four from doing away with entire pieces of legislation.

But that the Supreme Court has even decided to take a look at this case is cause for concern. As the New Republic explains, it takes four justices to approve a case. That means at least four members of the highest court in the land think the placement of four words is serious enough to merit consideration.

If the court decides that only residents of those 14 states can receive tax credits, it means that nearly 5 million people could immediately lose their subsidies — and therefore their ability to pay for their coverage. That would be one hell of an impact for four words to have.

The court has been unpredictable on Obamacare thus far, though the law has mostly been kept in place. It would be a crazy outcome if, given all the challenges the health care initiative has received, the court decides that the phrase "established by the state" goes against everything the government intended and is worth crippling the law over. But it's realistic enough to have advocates worried.