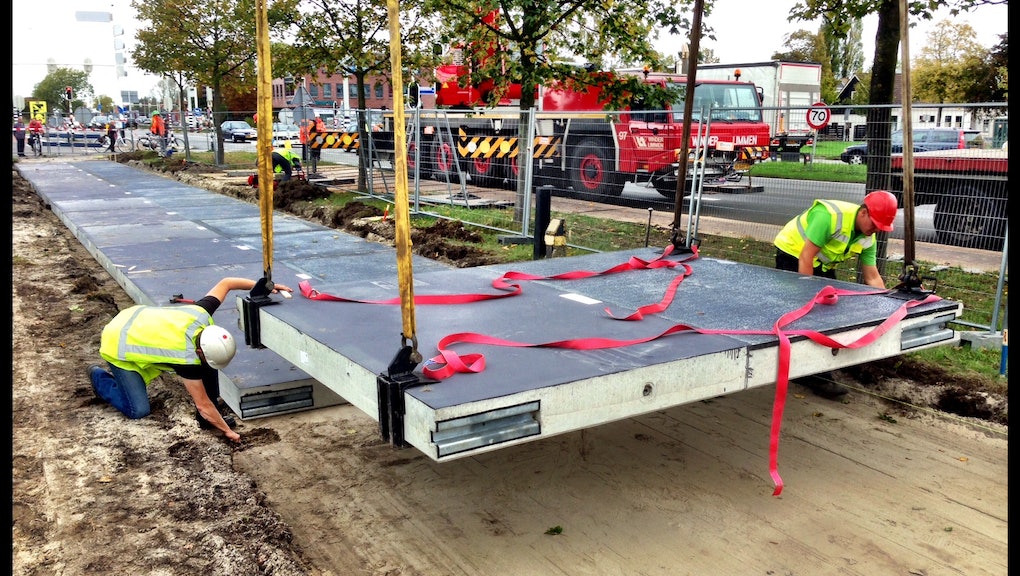 The Netherlands Has Built Something No Other Country Has

The news: When it comes to solar roadways, the Netherlands has officially put the rest of the world on notice.

On Nov. 12, the very first bike path powered by solar panels will open in Krommenie, which lies just northwest of Amsterdam. Though the lane will stretch only 328 feet in length when it's eventually completed, it's a big step for solar roadways, which, despite much fanfare, are still only in the early stages of development.

CityLab notes that the path is a result of a collaboration between the private industry, the government and academia. Solaroad, as it's been dubbed, is made from concrete "modules" covered with a layer of glass and a friction-inducing layer to prevent accidents. The solar cells are in place beneath only one traveling direction — the other side of the road will be used to test various top layers to see which surfaces work best.

"In time, the solar power from the road will be used for practical applications in street lighting, traffic systems, electric cars (which drive on the surface) and households," reads the description.

The path does have a few drawbacks. It can't be angled toward the sun, so it receives roughly 30% less solar power than roof panels. It was also incredibly expensive — roughly $3.7 million, paid for largely by the local government. However, once completed, researchers are hopeful that the path will produce enough energy to power three households.

Eventually, the plan is to extend the idea to roadways, as the concrete and glass cover are strong enough to support the weight of a truck. The Guardian reported that up to 20% of the Netherlands' road system could be converted to solar roadways, which could help provide energy to things like traffic lights and electric cars.

Across the ocean, a pair of Americans, Scott and Julie Brusaw, are attempting to make solar roadways a reality as well. As Mic reported in May, the couple are in the midst of bringing that idea to life. Their Indiegogo campaign has raised more than $2 million so far; they also received a $50,000 private grant and two rounds of Federal Highway Administration funding.

The bike path in Krommenie is a small step, but it's important nonetheless — we could see many more like it before long.