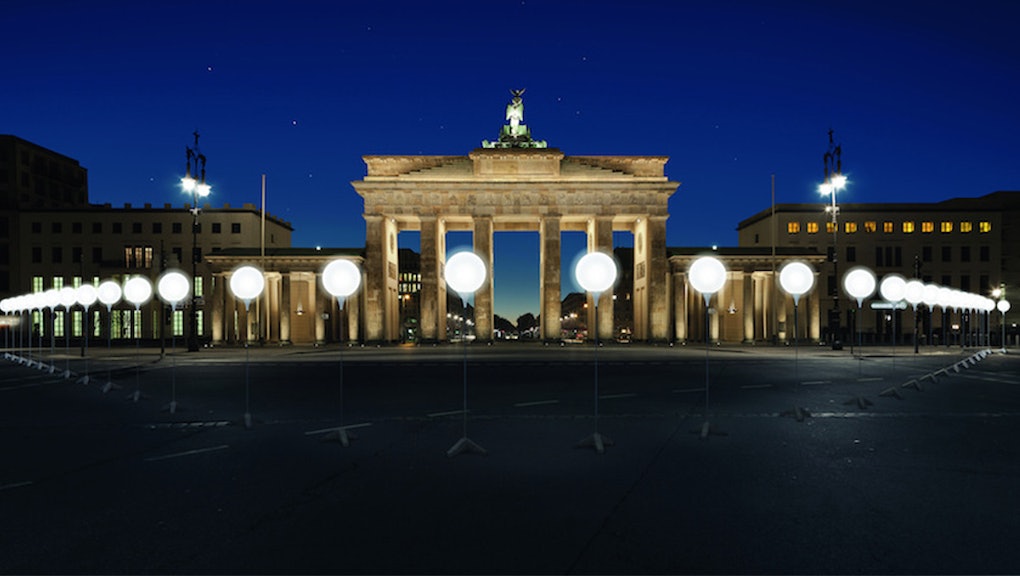 Two Artists Are Recreating the Fall of the Berlin Wall With 8,000 Glowing Balloons

Twenty-five years ago, Berlin was a city divided. The East was under Soviet control, while the West continued to identify with the Allies. The two would stay separate until Nov. 9, 1989 when the Berlin Wall finally came down.

Now, almost three decades later, the city is divided once again — but this time by 8,000 glowing balloons.

Calling it "Lichtgrenze" (Light Border), artist Christopher Bauder and his brother Marc created the installation to commemorate the 25th anniversary of the fall of the Berlin Wall. They installed the 24-inch balloons, each attached to a pole that includes a LED light source, along a 10-mile stretch of the wall's original 96-mile path. As Wired's Liz Stinson put it, "From the sky, it looks like a giant line of Pac-Man dots scattered across the German landscape."

The orbs start at Bornholmer Street border crossing, which used to function as a checkpoint between East and West Germany. Like the original wall, they extend to the city's center, Brandenburg Gate and the Reichstag; they also prevent motor access at points and block off certain roads.

The intention, however, is not to dwell on the wall's existence. On Sunday evening at 7:00 p.m. local time, 8,000 people will unlock the balloons, which also contain personal messages. They'll be carried away into the night, and the Daily Mail reported that Beethoven's "Ode to Joy" will play as the balloons are released. It's meant to signify the dissolution of not only the wall, but of the symbolic divide between East and West. "We wanted to counter this ominous, heavy structure with something light," Marc Bauder told the Daily Mail.

The installation is also meant to be educational. As Wired noted, "Video screens dotted along the route show archival footage of the days before and after the wall fell. The film is meant to contextualize the spectacle, filling in the actual history and helping to illustrate how much has changed ... Unlike a history textbook or an article on Wikipedia, art has the inherent benefit of showing, not telling."

Having worked on it for seven years, the brothers initially aimed to have the project completed in time for the 20th anniversary, but bureaucracy and organizational problems got in the way.

Besides commemorating the fall itself, the balloons pay tribute to the 138 people who lost their lives trying to escape beyond the Wall. "This will trigger understanding of what it meant to have a wall in front of your door," Marc Bauder said. "There were people coming out of their homes, and they couldn't even cross the street because a wall was there."

As the Independent explains, the Berlin Wall was constructed virtually overnight and took city residents "by complete surprise." Many people were cut off from everything — families, friends, jobs, cars and even homes. In the ensuing months, the initial barriers were reinforced with concrete walls and guard towers. In 1979, two East Germans, Hans Strelczyk and Gunter Wetzel, famously created a hot air balloon to transport themselves over to the other side.

"Everything the city is today is based on that the wall came down," Christopher Bauder told Wired. "It's important to bring back the memory of how this all started and what was actually before this."