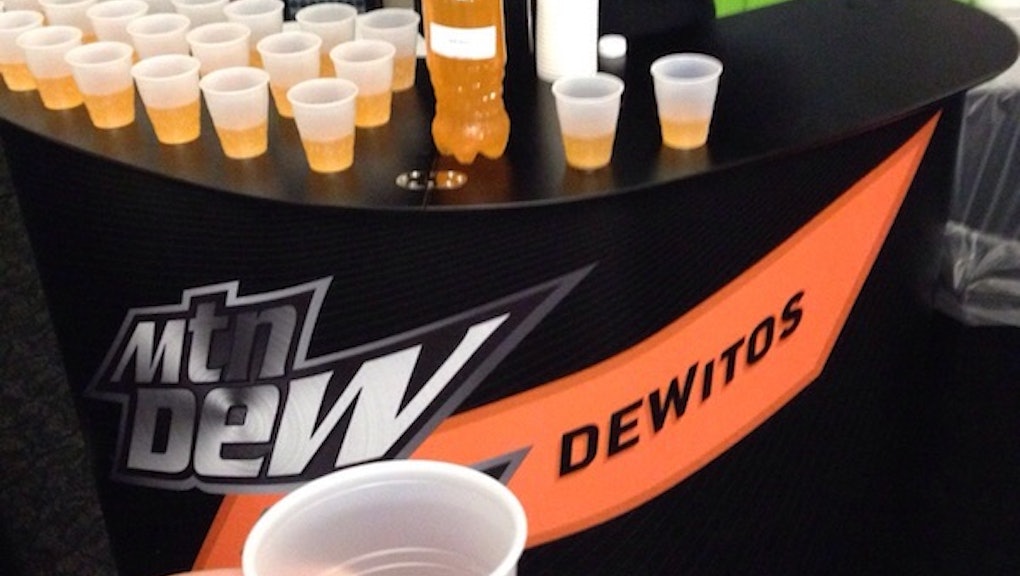 Doritos-Flavored Mountain Dew Now Exists, to the Dismay of Just About Everyone

Brace yourselves ... "Dewitos" are coming.

On Friday, PepsiCo announced that it has successfully (?) developed a new Mountain Dew flavor: Doritos. Dubbed "Dewitos," the beverage will attempt to mimic the nacho cheesiness of every stoner and seven-year-old's favorite snack.

"We are always testing out new flavors of Mountain Dew, and giving our fans a voice in helping decide on the next new product has always been important to us," a spokeswoman for PepsiCo told the Huffington Post. "We opened up the DEW flavor vault and gave students a chance to try this Doritos-inspired flavor as part of a small program at colleges and universities."

One such student, reddit user joes_nipples, posted a photo of the concoction to the subreddit r/pics. The user reported that it did, in fact, taste like Doritos, though if the top response ("I think I just vomited a little") is any indication, PepsiCo has a fair bit of marketing to do if they ever foist Dewitos upon the rest of the public.

As the Huffington Post noted, the company has a habit of combining the two snacks. In 2008, for example, they released Doritos Quest, a "mystery" chip whose secret ingredient was later revealed to be Mountain Dew.

Somehow, though, the thought of drinking a nacho-flavored beverage — versus eating a Mountain Dew-flavored chip — seems much worse.

Given that the target audiences for Doritos and Mountain Dew are more or less the same, it's almost surprising that the combination didn't arise sooner. Of course, that doesn't mean it's a good idea. As Gothamist's Ben Yakas sagely pointed out, "Some people really do just want to watch the world burn."

It's yet to be determined whether Dewitos will ever make it all the way to your grocery store's refrigerator, but you can bet that if it does, Mic will be there to taste test it.