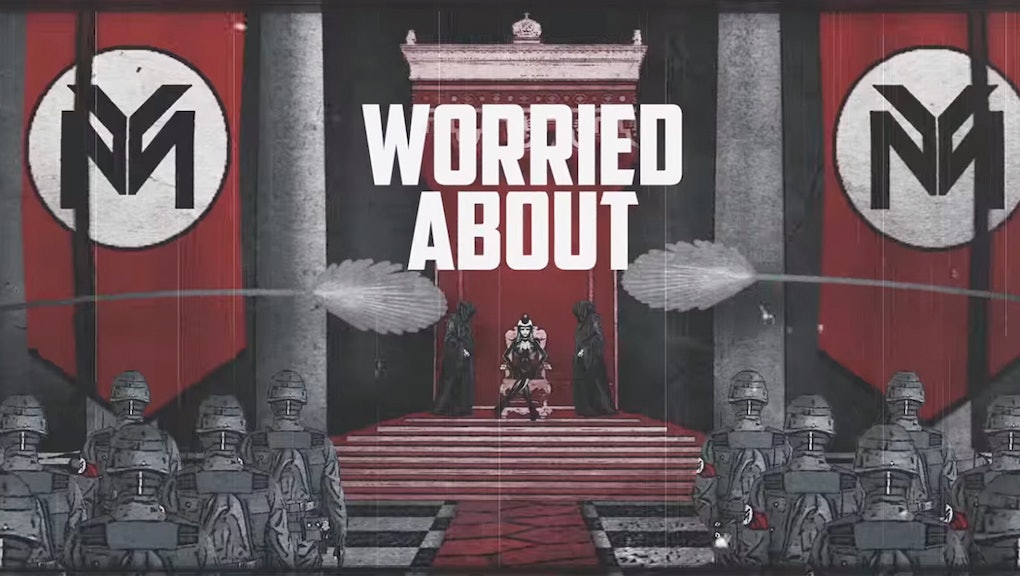 On Friday, Nicki Minaj posted her newest music video for "Only" on YouTube, and it pretty quickly became clear something was off.

Before you ask, the problem isn't that it's one of those stupid lyric videos. Well, that is a problem, but the main concern lies in the fact that whatever aesthetic Minaj was going for unfortunately came out looking undoubtedly similar to Nazi imagery.

So, as you can see, the Nazi resemblance is strong. From the black and red color scheme with the very Nazi-looking "Nicki Minaj" logo and the general sense of empire ...

... to the masses of weapons and a daunting overlord ...

... to the hordes of black leather-clad soldiers wearing red armbands ...

... to the general sense of systematic death and killing ...

... and the threatening heavy use of words to hammer home the ideas, there's just a lot happening, and it all points toward one thing: Nazis.

Whether Minaj meant to get so close to Third Reich style isn't clear, but it's hard to imagine no one involved in the process didn't, at some point, look at this and think to themselves, "Well, this just looks like a bunch of Nazi things."

"It's one thing for Minaj and her crew to assert themselves as the most elite members of society: Nicki Minaj as a (presumably fascist) dictator, Chris Brown as a military leader, Drake as the pope, and Lil Wayne as some kind of CEO. But this is just lazy. I'm usually #TeamNicki, but this video is basically one giant tug of war between dumb and offensive."

Aran's right: This is lazy, dumb and offensive. While Minaj has been known, especially lately, for her "stylish" music videos, this is just terrible in so many ways (not to mention the fact that the song itself isn't stellar either).

But don't just take my word for it, plenty of people on social media have noticed similar issues:

Exactly. It's pretty clear, right from the video's start, that this isn't OK. Minaj made a mistake, and it was a big one.