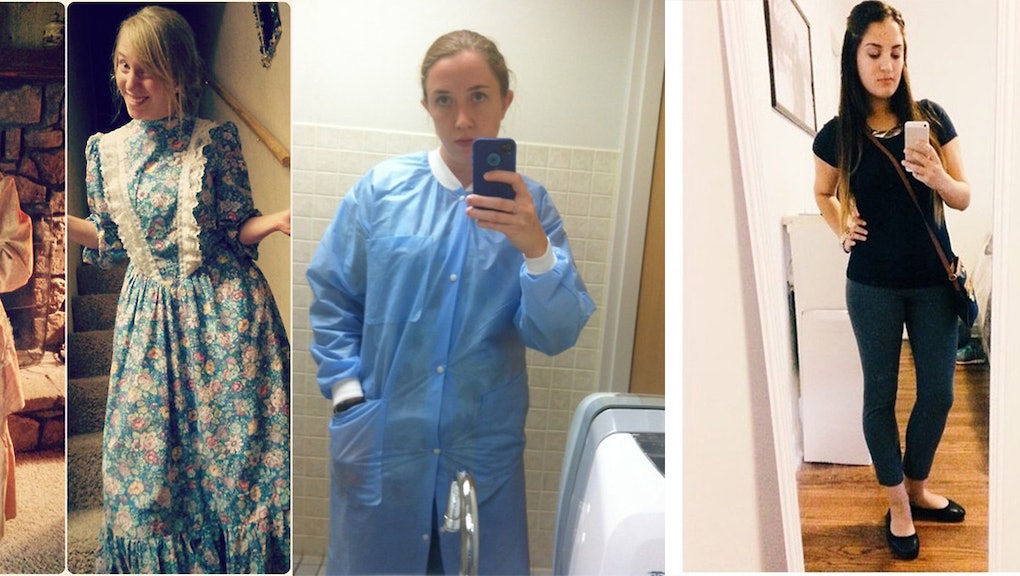 "But What Was She Wearing?": A Powerful Tumblr Destroys the Big Myth About Catcalling

"Yeah, but what was she wearing?"

After this video of a woman walking around New York City enduring hundreds of catcalls went viral, street harassment (or catcalling) has been getting a lot of attention, and for good reason. It's a terrible problem that is systematically overlooked or ignored. And all too often, the response to a complaint of street harassment comes in some form of "Well, what was she wearing?" — as though that would make a difference.

Simply put, that does not make a difference. Besides the fact that a woman's appearance is never a justification for street harassment, women are catcalled no matter what they're wearing.

To prove this point, Kati Heng started a Tumblr blog to document what girls are wearing when they're catcalled, and some of the outfits might surprise you. Titled "But What Was She Wearing?: Stop the Catcall," the Tumblr compiles and publishes both photos and descriptions of what women were wearing alongside their stories of street harassment. Heng's message? "Please get over that dumb question and just listen to our stories."

While someone who asks the question "What was she wearing?" expects an answer along the lines of "short, tight dress, done-up hair and high-heels," the truth of the matter is much different. Here's a selection of posts from the Tumblr of what women were wearing when they were harassed and the stories behind each incident.

"Pants, tank and a cardigan on top. I am a senior in college and have experienced cat calling for way too long and too often. Usually by many college students that walk the same campus as me. Things like, "Daaaaaamn," or "hey mamacita" have sadly, become my reality."

"I was having a pretty bad day and did not feel like changing out of my pajamas or putting on make up. So I went to class like this plus some sandals. As I was walking on my own college campus a man walked past me and said "Hey Gorgeous I like that shirt" and I just kept walking because I knew it was going to be one of those times. As I kept walking he turned around and walked in my direction. He proceeded to ask where I was going, and If I wanted to go out with him. When I continued to ignore him and then called me a "selfish fat c***" and said that he was just "trying to give a fat girl a compliment and I should feel grateful."

"I was coming out of my apartment and walking out the alleyway when a guy started driving slowly behind me. As he passed, hanging out of his driver's window, he said, "heyyy girlfriend, you lookin gooooooood today." Unnerving distance between that driver's window and me. I regretted wearing a skirt that day, and that just isn't right."

"I was going to run to the bathroom downstairs before work when a guy who was going up the escalator jumped on the one going down. Looming over me on the step right behind me, he said, "Hi." I walked down the steps & still headed to the bathroom. As I glanced in the glass I could see he was following me. He followed me right to the bathroom, but as I walked in the door, he stopped.

"Remember- costumes ARE NOT consent!!

"I was running an errand for work during the day in Chicago's Gold Coast, threw on my oversized jacket and went on my way. As I walked past this guy, he said "mmmmm that ass" in the most disgusting and violating way possible. I felt dirty afterward. As I turned around in disgust, he had stopped in his tracks and just stared looking me up and down. I yelled "ARE YOU SERIOUS?!?" and he turned around laughing and walked away."

"On my way home from work, a man on Chicago's red line told me: "I hope you aren't a homosexual because you're a cute little thing and that would suck for a lot of men." As if I exist for the mere pleasure of "a lot of men." Or anyone for that matter.

"I work in a lab and this is my lab coat that goes down past my knees. I wear it over loose scrubs.

"I work at a theme park. These are my uniforms. Weekly, men of all ages walking by will call, "Hey girl, how you doin'?  I like your dress" and other things along those lines.

As these Tumblr posts have made painfully clear, what a woman was wearing when she was victimized by street harassment is entirely irrelevant. Whether it's a Halloween costume, medical scrubs, a long and conservative period dress or just jeans and a shirt, a woman can — and unfortunately often will — be catcalled, regardless of what she's wearing, doing or saying.

"The reality is that street harassment has nothing to do with making the harassee feel good, and everything to do with making the harasser feel powerful. These invasive comments affirm an attitude that men are entitled to publicly evaluate women's bodies and tell them what to do ("Let me look at you!"), and reinforce harmful, already prevalent assumptions that women's worth is related to their ability to please men."

Exactly. And no matter what the target is wearing, the harasser will often stop at nothing to feel powerful and please himself.

On the upside, the nonprofit organization Stop Street Harassment recently released a report arguing that stopping street harassment is actually possible. But until we realize the prevalence of the problem and the fact that all women are potential targets, fixing this problem will remain almost impossible.

What she was wearing doesn't matter. Period.