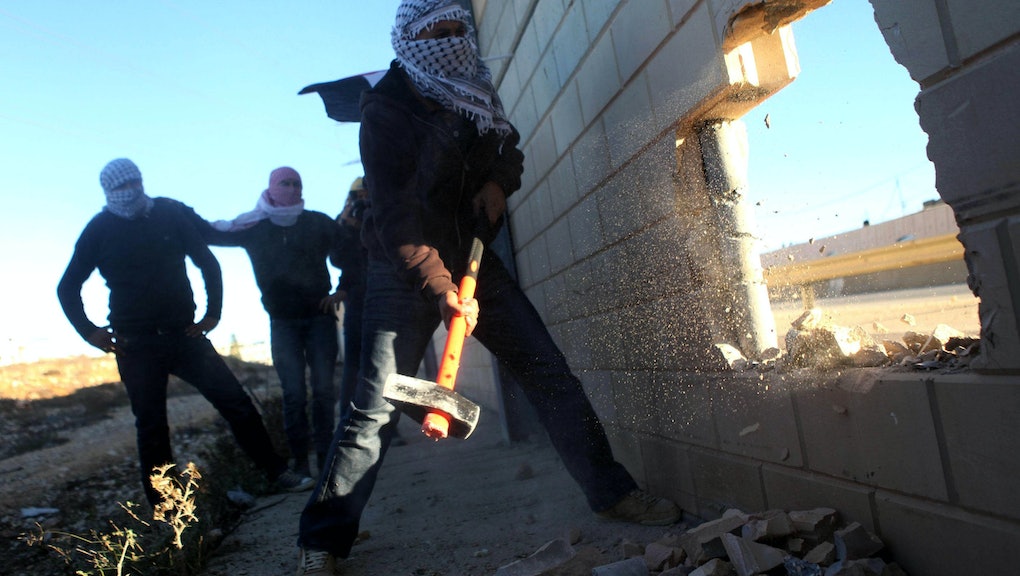 The news: In a symbolic gesture marking the 25th anniversary of the fall of the Berlin Wall, Palestinian youth have broken through the separation wall cutting them off from Israel. On Saturday the activists sledgehammered their way through from the West Bank village of Bir Nabala into Israeli territory between Jerusalem and Ramallah.

The activists said they wanted to destory chunks of the wall to "stress that Jerusalem is an Arab and Palestinian city, and that neither the construction of the separation wall nor Israeli military reinforcement could prevent Palestinians from reaching Jerusalem and the Al-Aqsa mosque," reports Palestine's Ma'an news agency.

Al-Jazeera reports the wall-breaking on Saturday appeared to be the work of a small group of committed activists rather than part of an organized campaign.

"No matter how high walls are built, they will fall. Just as the Berlin Wall fell, the wall in Palestine will fall, along with the occupation," the popular committees said in a statement.

Take a look at some photos of the smashing:

The background: Construction on the wall began in 2002 in an effort, according to critics, to enclose some 550,000 Israelis living in occupied territory as part of an illegal land grab. For their part, the Israelis insist the wall is partially responsible for a dramatic drop in terrorist attacks since 2003.

Why you should care: The hole in the wall comes amid rising tension between Palestinians and Israelis, which has sparked worries of a third Intifada. Months ago, a brutal Israeli military operation to destroy Hamas missile caches and tunnels throughout the Gaza Strip killed at least 1,486 Palestinian civilians, including more than 500 children.

In recent weeks, Palestinians have twice driven cars into civilians waiting at Jerusalem light rail stops following a spree of high-profile shootings, including one that nearly killed radical rabbi Yehuda Glick. Israeli plans to both begin constructing 1,000 new settlement homes in east Jerusalem and pass a law punishing Palestinian stone-throwers with up to 20 years in jail have further escalated the tension, as have right-wing Israeli politicians the Jerusalem Post reports are "agitating for a greater Jewish presence on Temple Mount."

With tensions as bad as ever, the Israeli-Palestinian conflict seems as impregnable as the Berlin Wall once did. Unfortunately, things show no sign of getting better anytime soon.