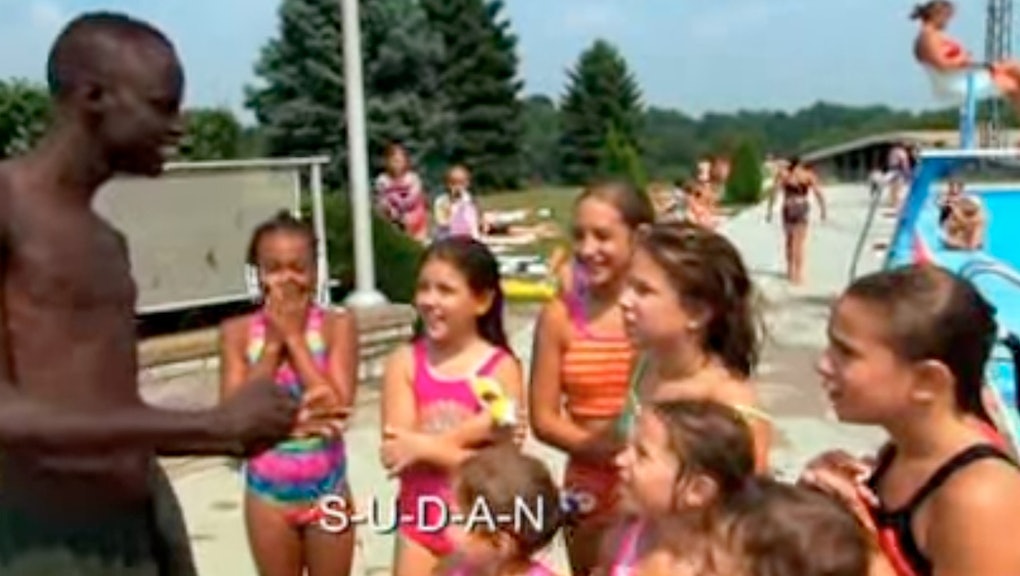 Video Shows What Sudanese Refugees Face When Coming to America

"S-u-d-a-n," a Sudanese refugee immigrant to the United States tells a group of giggling girls at a local pool in the 2011 video "Culture Shock, Sudanese Refugees Coming to America."

But the entire time, his attempts to teach them about his country are peppered with insistent questions of "What does that mean?"

Though the video was published in 2011,  it's been recently gaining traction on social media from Americans and international viewers alike.

And it's not surprising why. The video offers a unique glimpse into the challenges refugees face when they receive a rare chance to escape persecution, at times in the form of asylum in another country. It documents the journey of a group of men journeying from their village in Sudan to asylum and a new beginning in Pittsburgh, Pennsylvania.

Cultural divide: There are snippets of "first time" experiences meant to delight.

"They call this chips," a host tells the men at their new home, "they fry it and put it in a bag." Another first time, eating a sprinkled donut at a grocery store, made passersby into gawkers.

"Many of us have many questions to ask, but only have a few people to answer them," one man says.

There are also some other first time encounters that reveal certain truths about American society that would go unnoticed if not for the outside perspective, such as the costumed Santa Claus holding children on his lap in shopping malls.

"How is that connected to the birth of Jesus Christ?" one of the men asked.

Serious issues: As they experience assimilation, the men are shunned by neighbors and begin to recognize the invisible barriers Americans' have erected as a form of security. One man lamented that people are not friendly to each other.

"You can find someone walking in the street by themselves and they don't want to talk," one of the men observed while he sat adjacent to front yards separated with towering fences. "You can't go to the house of someone you don't know, though you are all American. ... It's a great shame."

In the neighborhood and surrounding city, merchants filed complaints with the local police. According to the video's narrator, the owners "felt intimidated when the men enter their stores in large numbers." As a result, a meeting was called to advise the boys not to travel in groups.

Varying problems: Such challenges attached to assimilation cannot compare to a famine or conflict that induces mass migration and displacement. But for the Sudanese refugees, the micro-aggressions of American society, along with solitude born from exile, can, in many unfortunate ways, replace the issues they faced in Sudan.

"S-u-d-a-n, it's a country where I came from," one of the men described at the local pool as laughter erupts from the curious girls. "It's a country with black people where you cannot find a white man," he continues.

A smiling girl responds, "Now we get you."