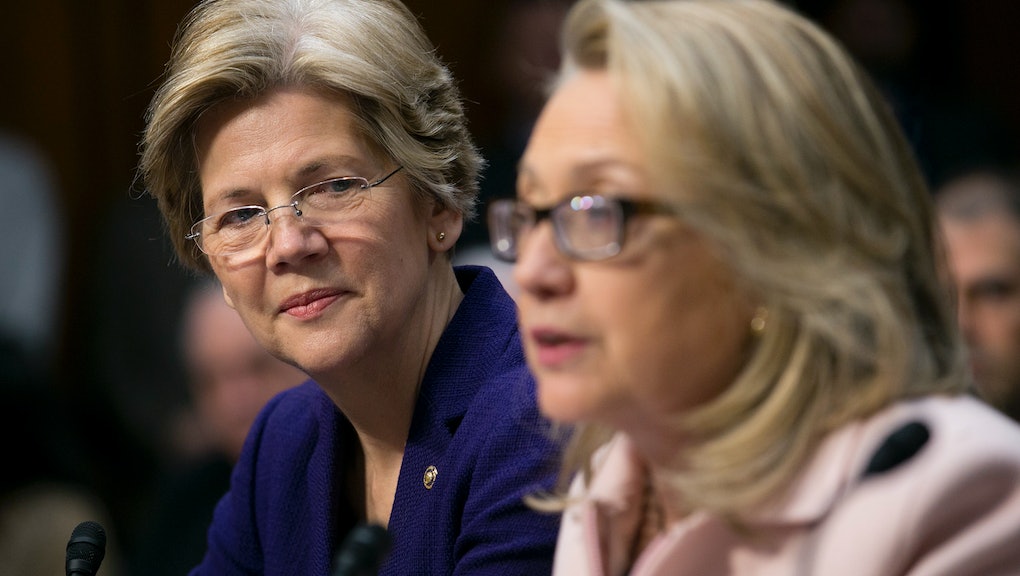 The inevitability of Hillary Clinton is approaching the inevitability of the sun setting in the west. Her polling among Democrats ranks her "the most dominant front-runner at this stage of a Presidential contest in the Party's modern history," according to the New Yorker. There is no other potential candidate for the presidency in the Republican Party who commands comparable levels of institutional backing, celebrity and experience.

Politico insists that the Republican shadow campaign to destroy Clinton is the defining aspect of 2016. But Clinton's most vexing thorn may very well lie in her own party.

Enter Warren: Massachusetts Sen. Elizabeth Warren, the near-extinct breed of Democrat who has national stature and uses it to speak ill of Wall Street, has signed a letter supporting Clinton's near-certain run for the presidency and has repeatedly made it clear that she's not running for president.

But in October she evolved on the issue and implied that she didn't want to close any doors. And the stir caused at a rally where she and Clinton spoke recently suggests that even if she doesn't ever take Clinton on directly, her magnetic strength with the progressive base of the Democratic Party symbolizes one of Clinton's and the Democratic establishment's greatest weaknesses.

A revealing stumble: A few days before the midterm elections, Warren and Clinton spoke at a rally to support Martha Coakley's bid for Massachusetts governor. Coakley lost, but the rally is interesting for other reasons.

Warren spoke first and hardly mentioned Clinton, according to Politico. In Clinton's remarks, she went to great lengths to embrace Warren and sounded an unusually populist note throughout her speech and made a striking remark for someone angling for the White House: "Don't let anybody tell you that it's corporations and businesses that create jobs."

The odd statement was a lightning rod, drawing fire from conservatives all over the Internet. A few days later Clinton walked it back, calling it shorthand and offered a more generic remark on the importance of entrepreneurship.

Psychoanalyzing gaffes is often a waste of time, but in this case it offers some insight. Out of her element on Warren's turf, Clinton overcompensated for her history as a wealthy Wall Street Democrat. She was not convincing to the progressives who are disillusioned with the Democrat's relationship with the middle class nor equipped to stand her ground when criticized by the right. This kind of clumsy, neither-here-nor-there positioning foreshadows Clinton's serious challenges on economic issues in the run-up to 2016.

Warren doesn't need to run against Clinton in order to make Clinton's campaign more difficult. She can withhold endorsement or she can campaign for other candidates or issues like income inequality. At this point, she's developed the kind of reputation where it's considered news when she refuses to say if Clinton is too cozy with Wall Street. Powerful journalists say she should run just so she can put issues on behalf of the middle class on the map.

It's not over yet: Clinton cannot assume the nomination or the presidency are hers. Her ascendance was considered preordained in 2008, but then a charismatic outsider named Barack Obama clinched the nomination. Given Obama's low approval ratings — heavily linked to a lackluster economy — Clinton should be wary of delaying on a promise that he has failed to deliver: a fairer, more equal economy that serves everyone's interests.

That will require serious work and commitment, and many progressives are not convinced she's the right woman for the job. Until they are, the chatter for Warren to jump into the presidential race and keep Clinton in check will only persist.