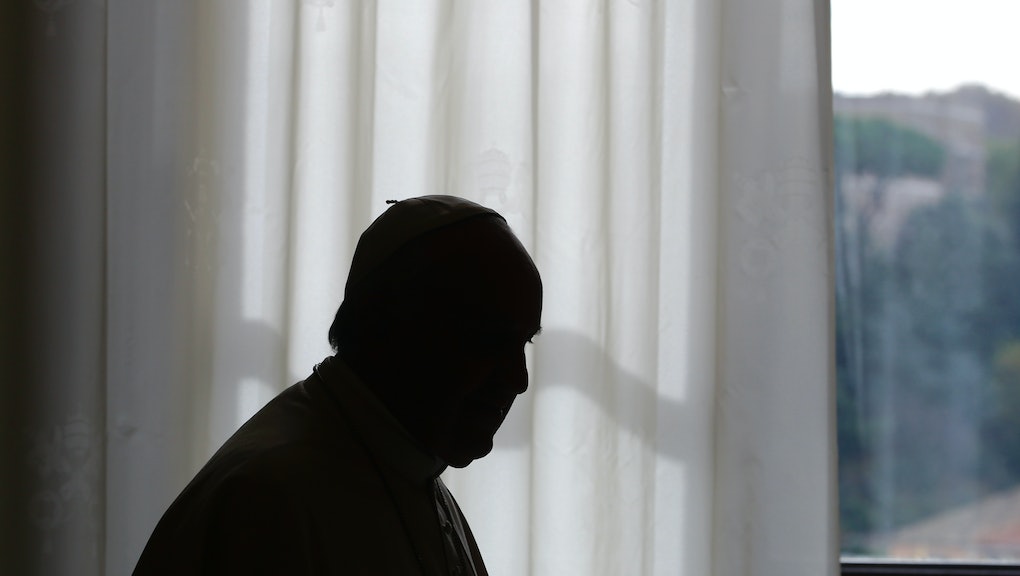 The news: In a move that's elicited applause from the victims of clerical abuse, Pope Francis has officially excommunicated a Argentine priest who confessed to pedophilia. While it's a major step in the right direction, some are still calling it a lax effort considering the church's supposed "zero tolerance" policy for crimes against children.

In 2011, Argentine priest Jose Mercau received a 14-year prison sentence after admitting to sexually abusing four teenagers but spent only 15 days in jail before spending the rest of his sentence in a monastery in Buenos Aires until his release last March.

Mercau's excommunication, which was announced Wednesday by the bishopric of San Isidro on the outskirts of the Argentine capital, signals a pivot toward Francis' zero tolerance policy, which he introduced last year with the hope of bringing abusers to justice and protecting victims of past abuse.

"The church still has a long way to go," Sebastian Cuattromo, director of the advocacy group Adults for the Rights of Infancy, told the Associated Press. Francis' policies "are being carried out because of the long fight by the victims," said Cuattromo, who was sexually abused by a priest at age 13.

A sordid history: While this might seem like a step in the right direction, Mercau's excommunication and past moves have been derided as nothing more than publicity stunts.

In July, victims groups criticized the pope for waiting 16 months before holding a meeting with six victims of abuse from Ireland, Germany and Britain. Francis begged forgiveness for the church in his homily during a private mass with the victims. The pontiff called the abuse a "grave sin," decrying how it was "camouflaged with a complicity that cannot be explained." Though Vatican spokesman Father Federico Lombardi defended the pope for his "positive intentions," critics were quick to highlight the tardiness of the meeting.

Regardless, many still view this "progressive pope" as just more of the same old guard that won't do much to correct the church's various wrongs.

"Over the past 2,000 years, two popes have met with about two dozen clergy sex abuse victims. Very little has changed," Mary Caplan, the leader of the Survivors Network of those Abused by Priests, said in a statement sent to NBC News. "A dozen popes could meet with 100 victims, and very little will change. These meetings are public relations coups for the Vatican and a distracting placebo for others."

Moving forward: In recent years, the outcry for decades-long cover-ups of rape and molestation of children has grown louder with each case of abuse, to the dismay of a worldwide flock of 1.2 billion Catholics.

The decision to excommunicate Mercau took "way too long," Patricia Gordon, a psychologist for EnRed, a group that focuses on victims of violence and sex abuse, told the Associated Press. But each case of punishment against perpetrators chips away at a centuries-long issue.

"It's still important because of the reparation to the victims," Gordon said, "meaning that their words are taken as the truth."