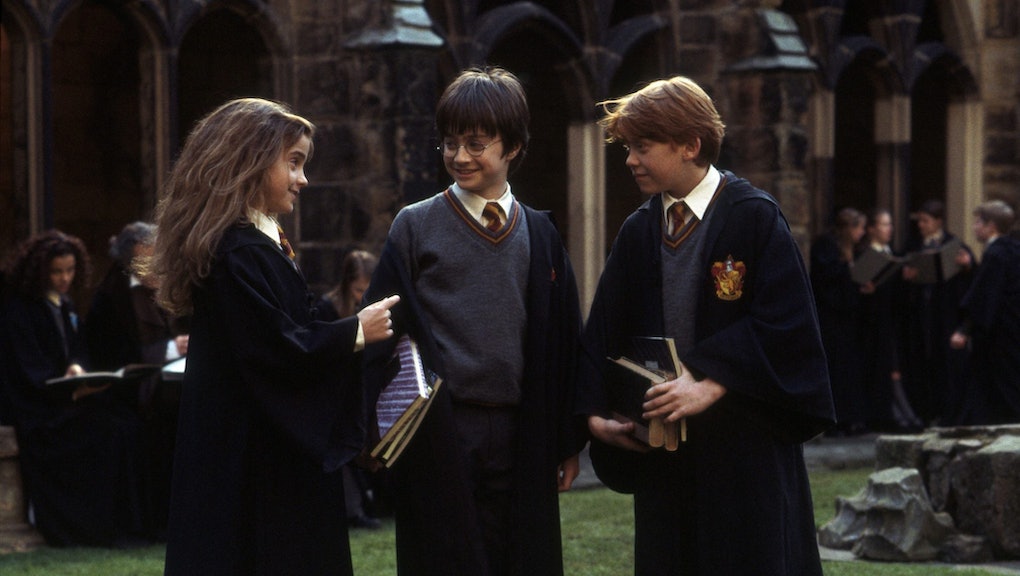 30 Real Life Lessons from 'Harry Potter' That Every Adult Needs

If you've read the Harry Potter books and watched the movies, you probably have a strong attachment to J.K. Rowling's world of witchcraft and wizardry. The stories took us on fantastical adventures, showed us what true friendship looked like, tugged at our heartstrings and much more.

We grew up with Harry, Ron and Hermione. And while we might not have been facing Lord Voldemort as teenagers, the Golden Trio dealt with similar struggles as us Muggles. From balancing grades to figuring out relationships, the literature is rich with lessons we learn as we get older.

In light of the 13-year anniversary of the first Harry Potter movie's release (Nov. 16), we've rounded up 30 of the most important things the magic taught us.

Teachers are the backbone of this world.

From Lupin fighting relentlessly against Voldemort to McGonagall preparing Hogwarts for battle, the professors at the school valiantly protected their students. Real-life teachers might not dabble in magic, but most have their students' best interests in mind — even when they're assigning extra homework. Practice, obviously.

Just because you aren't blood-related to someone doesn't mean they aren't family.

The Weasleys became Harry's surrogate family over the course of the books, with Molly knitting sweaters at Christmastime and the twins teasing Harry like they would any of their red-haired sibs. Ron and Harry's brotherhood is tighter than any fraternity's and is a reminder that family is more about the love than the blood ties.

Learn how to say people's names right. They'll appreciate it. Also, so you won't make the same mistake as John Travolta.

The Golden Trio ended up using the charms and potions lessons from Hogwarts to save the day more than once. Education is vital. Post-secondary education isn't necessarily for everyone, but it's important to consider.

But intelligence isn't always the most important thing.

Hermione was often the one doing heavy research to figure out what was going on. Meanwhile, Ron and Harry were definitely not the brains of the group, but their courage and heart sometimes did what Hermione's book smarts couldn't.

Pretty in pink isn't always what it seems.

Two words for you: Dolores Umbridge. Just because someone looks pleasant and delicate doesn't mean they are; they could very well be a wolf in a sheep's clothing.

True friends are going to stick up for you when the going gets tough.

If you're in trouble, it's very easy for those you're close with to also get swept up in whatever's going on. Ron and Hermione learned that the hard way, but also were more than OK to help Harry out with whatever trouble he found himself in. Often, your friends will do the same.

Sometimes we make difficult decisions to protect the ones we love.

It's a lesson that almost every character learned. Few decisions in the series were easy ones, and that goes for the world of Muggles as well. From breaking up with someone so they can fully achieve their dream to sometimes hiding the truth until the time is right, it always comes from a place of love.

Listen to those that are often unheard.

As loony as Luna Lovegood seemed, she usually had the answers to what was going on. Don't overlook the people in life who are too timid to speak up or labeled crazy. Sometimes the quiet guy will turn out to have a list of ridiculous stories, and maybe there's something more to the town lunatic.

Your illness does not define you.

Remus Lupin didn't let his lycanthropy consume his life. Whether you were born with a certain condition or an illness developed later, remember that you're a person before whatever your body has.

Don't try to be something you aren't.

Pretending to be something untrue to yourself is a dangerous game, as Gilderoy Lockhart learned the hard way. Just own up to what you can and can't do already. All the time you spend faking it could be put toward learning to feel comfortable in your own skin.

Love games are so juvenile.

If you're into someone, just say it. You could be wasting valuable cuddling time by waiting years to speak up. And don't date someone else just to make them jealous, that's just crappy.

Bureaucracy isn't always the most cooperative.

The Ministry of Magic failed to believe Harry when he warned that Voldemort was back and ready for worldwide destruction round two. Government bodies tend to lag when it comes to important issues — even in the world of magic.

Having a good heart will pay off.

When Harry got to the bottom of the Black Lake for the Second Task of the Triwizard Tournament, he couldn't just leave Fleur's little sister behind, so he rescued her too. Although he came in lower than the other competitors, his moral fiber got him extra points, without him knowing he would be rewarded for doing something good. Play nice and some karma might come your way.

You won't always get to say goodbye to the ones you love.

Sometimes departures happen suddenly. Let people know that you care about them, because sometimes they're gone faster than you can blink.

There can be jealous moments even in the closest of friendships.

Ron was envious of the attention Harry got during the Triwizard Tournament, and even Hermione was irked when the Boy Who Lived miraculously became the potions expert in Year Six. Jealousy happens; we're humans, after all. It's fine to be a little green, but you just can't let it take over your life.

Madame Pomfrey did tons for everyone at Hogwarts. Between regrowing Harry's bones to taking care of a petrified Hermione, Pomfrey is often forgotten by Harry Potter fans. She's a reminder that people in the medical field other than doctors are able to do some amazing stuff with science (or magic, in her case).

Sometimes you need to break the rules.

Rules were meant to be broken, right? Well, not exactly. But there does come a time and place when the greater good warrants breaking a few suggested guidelines.

The criminal justice system is screwed up.

A pretty dark lesson, but Sirius Black's false imprisonment and treatment in Azkaban illustrate that sometimes the people who get sent to prison for crimes aren't the guilty ones. There are flaws in our justice system, including access to adequate legal help and mistreatment of inmates.

Everything is not what it seems.

We might not live in a world of Polyjuice Potion and Invisibility Cloaks, but magic isn't the only way people are tricked. Be wary when things seem off, because sometimes there's something else going on under the surface.

"If you want to know what a man's like, take a good look at how he treats his inferiors, not his equals."

Dobby stole the hearts of Harry Potter fans, eventually sacrificing himself in order to save our hero. Lucius Malfoy's cruel treatment of Dobby is a reminder of the Death Eater's dark soul, while Harry's trick to get Dobby released is a testament to the boy's golden heart.

This lesson comes up time after time in Rowling's magical masterpiece. A mother's love proved to be the one force you don't want to test. Lily Potter, Narcissa Malfoy and Molly Weasley all showed their maternal strength and prioritization of their kin's protection.

Dumbledore wasn't always upfront with what exactly was going on. But at the end of the day, he always had some sort of plan figured out. Sometimes, you've just got to trust those with tons of wisdom and see what happens.

Nobody likes a racist.

The "mudblood" slur had racial implications, with "pureblood" people often discriminating against those who didn't come from a family of witches and wizards. Essentially everyone who was a pureblood asshole in the books got what was coming from them.

Sometimes your demons take over.

Draco Malfoy had his cards stacked up against him. He wasn't inherently bad, but he was born into a family that had forged ties with Voldemort. He's one of the most complex characters in the books, and is a symbol of what happens when familial expectations conflict with your heart.

From winning Quidditch matches to taking down the bad guys, the characters couldn't have done anything just by themselves. It takes cooperation to get things done

Don't judge people by their appearance.

Hagrid's immense stature is intimidating. But he has a huge heart to match his height, and that's a reminder that people are much more than just what they look like.

Be nice to the dorky kid, because puberty might make him really hot.

Everyone wanted a piece of Longbottom at the end of the movie series. Enough said.

Death isn't as scary as it seems.

Death is a common theme in the books. One of the first things we learn about Harry is that his parents were killed by Voldemort. Instead of shying away from the passing of loved ones, the series celebrated their lives — an outlook that carries over to us Muggles.

We may get older, but the magic is forever.

For those who love Harry Potter and grew up reading the books, most have warm memories of imagining a world full of spells and potions. The reason the series has become a pop culture phenomenon is that people will always remember how the books made them feel. Friendship, the greater good, love — that's the real magic in the world.

What started off as novels has become everything from a theme park to immersive online experiences. While Harry Potter lovers might not be able to ride broomsticks and cast spells, we're better people thanks to the lessons from Rowling's world.