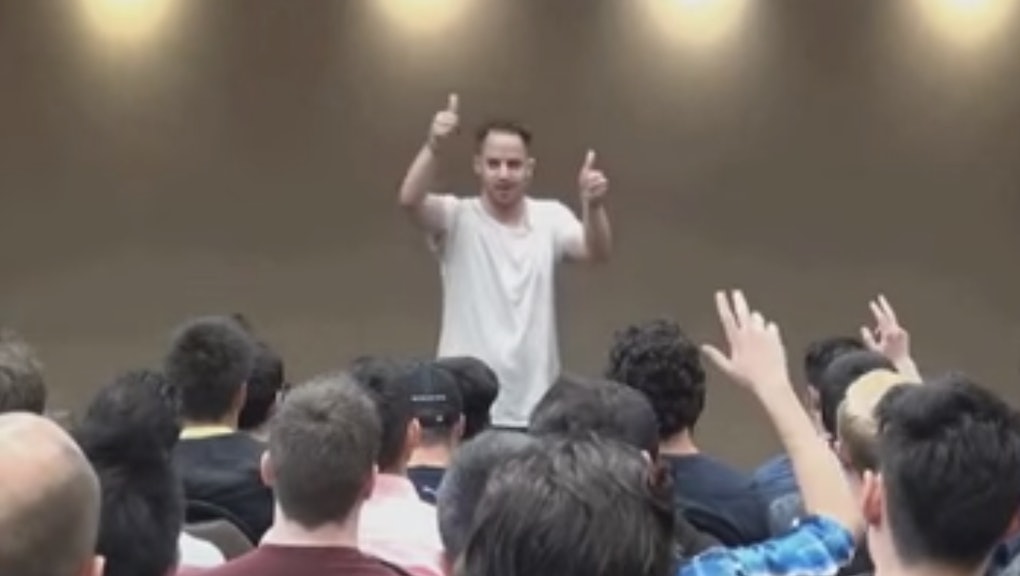 Pickup artists like Julien Blanc make an enterprise out of abusing women into submission in order to "date" them.

The American, whose visa was revoked in Australia after video surfaced of him instructing men on how to choke women and force their heads into men's crotches, is a celebrated figure in PUA culture. He has made a living traveling the world to teach men how to make women submit to their advances. "Make girls BEG to sleep with you after SHORT-CIRCUITING their emotional and logical mind into a million reasons why they should," is the tagline on Blanc's website. His Weird Science meets Robert Downey Jr.'s Pick-Up Artist dogma isn't just for show, however: It helps sell his $200 to $500 PIMP video series to men online.

"Julien's game is unbelievable," colleague "RSG Alexander" blurbs on the PIMP website. "I'm continually shocked by it, while at the same time unsure if it's actually happening. How can he get with what he does? When most people would go to jail for what he yells in public places — he gets laid."

Indeed, how can he get away with it?

Pickup artists, although they would never admit to it, do nothing short of teach men tactics of manipulation and physical and verbal violence to forcibly subject women to their will — all the while profiting from this misogynistic mentality. Blanc himself explicitly appropriates the language of violence in his pickup strategies. What he peddles is commercialized rape. Just look at this Facebook post in which he calls an image from the Domestic Abuse Intervention Project a "checklist" for picking up women:

But PUA culture is perhaps most dangerous because it capitalizes upon men's insecurities around dating and sex. In this regard PUA culture is not too distinct from the politics of the men's rights movement, which also positions men as the victims in a misandrist culture ruled by women. This was precisely the logic of Elliot Rodger, who blamed his shooting rampage on female rejection and whose links to PUA culture have been exhaustively documented everywhere from Slate to the Guardian and ThinkProgress.

Like men's rights activists, PUAs, too, employ strategies for overcoming this perceived female supremacy that depend on myths about women. My colleague Julianne Ross has already outlined those promulgated by MRAs. To add on to this list, here are some of the more popular myths advanced by PUAs, most of which are derived from the PUA ur-text, Neil Strauss' The Game, as well as the online PUA Lingo Dictionary:

1. You can attract women by saying dumb, offensive things.

The "Neg" or "Neg Theory" is what the PUA Dictionary refers to as an offensive or stupid comment that will make the female target drop her "Bitch Shield" and laugh. It's a little unclear who exactly this kind of line would work on, but needless to say, negs like "You have eye crusties" and "Is that a wig?" make you seem more like a crass child rather than a sophisticated adult worthy of someone else's time.

PUA Lingo says that "the Bad Boy refers to an archetype of a dominant male that women find naturally attractive." Sorry guys, but women see through this. Using the "Bad Boy" label to try to excuse bad behavior and sexual harassment is as outdated as it is ineffective.

The social Darwinian assumption is that women are naturally or biologically attracted to dominant, aggressive men. This ideal causes gender anxiety for men who can't live up to the ideal. Rodger, for example, invoked this idealized persona enviously, as the excuse for blaming women for his virginity.

3. Women need to be "seduced" to want to date men.

The entire PUA philosophy can be boiled down to one profound insecurity undergirding PUA culture: Women wouldn't choose to date men on their own. In order to overcome this perceived inadequacy, PUAs teach men that women need coercion, seduction and physical and verbal persuasion to be won over. This is what PUAs like Blanc really capitalize on: Contrary to MRA logic, PUAs are the ones who rely on so-called "awkward" guys in order to keep their business alive.

4. "Choking" and other forms of physical coercion are effective courting techniques.

No. Just No. These actions are effectively sexual assault, even if, as Blanc bizarrely advised, you scream cartoon characters' names while doing it.

PUAs motivate men by emphasizing their entitlement as men to dominate anything and everything they want, including women's bodies. Instead of respecting women's autonomy and asking them questions about their feelings and desires, PUAs teach men to make assumptions, as this Ultimate Player Checklist recommends, "Stop asking her where she wants to go and if it's cool with her. Lead, tell her what you're doing, she will follow and she will respect you for it." Assumptions don't rely upon consent and are, in fact, the opposite of consent.

6. Hypnosis and other tactics of emotional manipulation are OK.

No. Again, just no. Manipulation is never ok, because the intention is to confuse consent and reduce a woman's awareness of herself and her surroundings, making for a completely unsafe and nonconsensual environment. If you have to hypnotize a woman in order to have sex with her, guess what? This isn't sex. It's rape.

7. "Touching" is the quickest way to sex.

No, it is the quickest way to sexual harassment. This is an "opening strategy" of a PUA. Reaching out and just touching someone again connotes a male sense of entitlement. Consent is key. It is never OK to touch people just because you want to.

8. Women will "give in" if you just show a little persistence.

"Last Minute Resistance" (LMR) is what PUAs sometimes call it when a woman exhibits signs of reluctance after moving into a more intimate setting, say a bedroom. It's what the PUA Lingo calls a woman's "anti-slut defense." Charming. The strategy for dealing with this reluctance is not to take a step back and evaluate whether the date in question actually wants to move forward with the relationship. No, the next step for any PUA is to "plow," or show a little persistence when a woman resists.

Again, consent is key. Having sex with someone who doesn't want to won't buoy one's self-esteem. Contrary to PUA belief, this makes someone feel less desirable.

9. Playing the colonialist/imperialist/conqueror will win over any woman.

The identity of the dominant, all-conquering man situates women as a body of land to be wooed, won and possessed. White men, especially, believe that women of color actually desire this played-out imperialist fantasy. Because, duh, who doesn't want to be with a white man and all of his white glory? This is precisely the rationale Blanc describes when teaching men how to pick up women in Japan.

[In Tokyo]... if you're a white male, you can do what you want. [My friend told me] just grab her... So I pull her in, and she just laughs and giggles....  It's the happiest I've ever been. What's fucked, too, is that every foreigner (who's white at least) does this. You'll be roaming through the streets, and there's Japanese people everywhere, and you'll spot that one foreigner. And your eyes will lock. And you know that he knows, and he knows that you know, and it's like this guilty look—like you both fucked a hooker or something. And you just wait for him to pass, and then phew, you're back at it. It's awesome.

Actually, this is not attractive. A woman, no matter her ethnicity, is not a conquest, possession or property. She is a human. And she deserves to be treated as such.

Ultimately, women aren't flesh-form antidepressants that exist to make men feel better about their own insecurities. These PUA tactics are not charming in the least. But the real irony is that their main strategies, physical coercion and belittlement, make them inherently ineffective. The overarching PUA idea is that women won't be attracted to you, so you need go out and force them to like you. This doesn't work, because it only reinforces a twisted cycle of false expectations, failure and, of course, misogyny. Given what we know about how this cycle can end, men like Julien Blanc aren't just entitled jerks. They are dangerous.