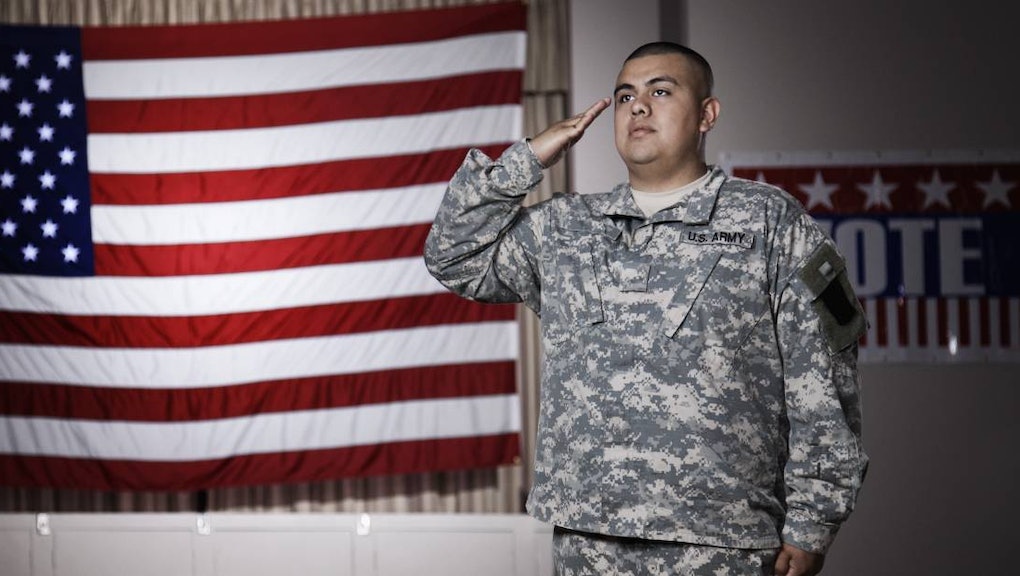 If We Really Wanted to Honor Veterans, This Is What We Would Need to Do

Americans love to stand up for their troops. They do it at ballgames every weekend, when teams introduce a veteran or wounded warrior. The crowd cheers, the vet waves and then it's back to the game.

That just isn't good enough. Not even close. Not for the men and women who risked their lives for their country.

There are 2.8 million veterans of the Afghanistan and Iraq wars back in the U.S. today. They face unique challenges that require unique solutions, and they deserve more from us than a few passing moments of approval.

On this Veterans Day, let's resolve to really honor America's fighting men and women by guaranteeing these four things:

1. Find a job for every veteran.

After more than a decade of bloody conflict, the men and women who fought two long post-9/11 wars in Iraq and Afghanistan are home now and having a harder time finding jobs than non-veterans.

As you can see in the graph below, the jobless rate for post-9/11 veterans is not at the civilian level. It's considerably higher:

The unemployment level for our generation of veterans is shameful, but it's also instructive. It speaks to deeply ingrained issues with how we treat men and women coming home from war. Forbes reports that a new study, co-authored by Harrell, from the nonpartisan Center for a New American Security shows that "hiring veterans isn't charity work, nor is it a decision grounded in patriotic duty. Actually, it's simply smart business."

The study found that veterans return home with a greater ability to adapt to "dynamic circumstances" and communicate in high-stress situations, two very important parts of any job. But it finds that they are held back by ignorance and a certain stigma that manifests itself in "concerns about the effects of combat stress, including post-traumatic stress issues, anger management and tendencies toward violence."

The study suggests a number of ways to deal with these issues. Among them is a call for the departments of Defense and Veterans Affairs, respectively, to "seek public-private partnerships with American companies and qualified nonprofit organizations." A good idea, no doubt, but one that stems from a shameful shortfall in government funding.

2. Reform the Department of Veterans Affairs.

Former Secretary of Veterans Affairs Eric Shinseki was forced to resign this spring after it was revealed that officials at VA hospitals had been covering up embarrassing statistics about how long patients had to wait to see their doctors.

The scandal was swept up into a larger political debate about the ability of the Obama administration and the federal government in general to properly manage such a sprawling and vital operation. But while the last regime's failure was unforgivable, the institution should be not be scrapped. The case for privatization, as made by Sen. John McCain (R-Ariz.), is shallow. The idea that veterans should be at the mercy of a profit-driven business is terrifying.

What the VA needs is better managers. If higher salaries are the only thing that will attract them, then Congress should pay whatever it costs. Spending on the VA has gone up over the years, but not enough to compensate for expensive continuing health care and rising tuition for veterans on the post-9/11 G.I. Bill. (It would also be nice if we could pay for their books and housing on time.)

In late February, Senate Republicans blocked a bill that would have expanded those programs. They wanted an alternative that included new sanctions on Iran. The Democrats refused and the legislation never saw President Obama's desk.

Everyone enjoys a video clip of a veteran arriving home from fighting overseas. But their stories and their struggles do not end once you've finished watching. For every tale of valor and patriotic sacrifice, there are 10 more accounts of the senseless violence suffered and carried out by soldiers at war.

It is no slander to tell these stories. And it is no weakness — quite the opposite — to seek them out and to listen. "War is hell," the Union general William Tecumseh Sherman said during the Civil War. The phrase is well-worn by now and for good reason: Our veterans have been there and back. By the middle of 2013, despite desperate efforts from mental health officials, veterans were committing suicide at the staggering rate of one every 18 hours.

Your attention will not change or heal what they have, in so many cases, suffered in combat. But to turn our backs on their stories — all of their stories — in favor of a feel-good few is truly unforgivable.

4. Don't send them to war unless it is absolutely necessary.

For these 24 hours, we celebrate the veterans. Tomorrow and every day after, it is our responsibility to make sure they are not put in the line of fire unless it is absolutely necessary. From the time President George W. Bush got his approval from Congress to launch an attack on Iraq, the White House — first Bush's, now Obama's — has acted without constraints.

President Obama unilaterally launched a series of airstrikes against ISIS and other alleged terror groups in Iraq and Syria without any suggestion of a vote or approval from Congress. This weekend, he deployed 1,500 more "non-combat advisers" to the region to fight (or not?) alongside Iraqi troops. There has been no real public debate because no one knows the facts. And, some might say, we like it that way.

Americans owe it to our veterans to ask the tough questions and hold presidents from both parties to account.

Today is Veterans Day. It will be over soon. But for the nearly 3 million men and women who returned home from the wars in Iraq and Afghanistan, the struggle goes on. What they have won, like what they lost, will stay with them forever. From us, they deserve work, good health care and an education. They should be able to tell their stories, every one, and know that their service will only be called upon as a last resort. This is what we owe our veterans. You can make that promise today.