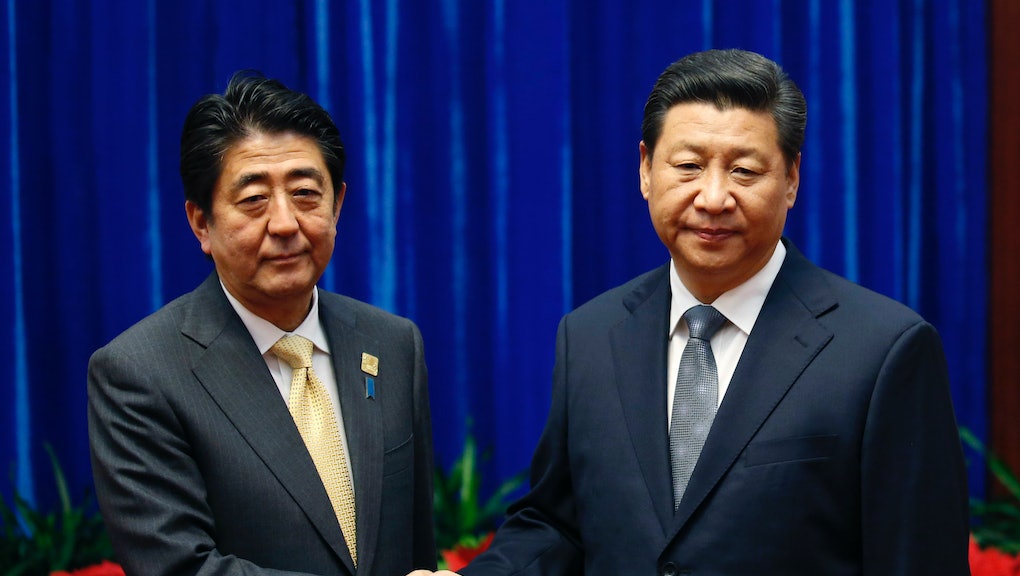 One Perfect Photo Sums Up How Other Nations Feel About China

The news: Chinese President Xi Jinping and Japanese Prime Minister Shinzo Abe made history Monday with a grip-and-grin pose, marking their first formal talks and meeting since both leaders took office. It may have also made history as possibly the most awkward handshake of all time.

The hard-to-watch handshake, which policy analysts say signals a diplomatic breakthrough, took place at the Great Hall of the People in Beijing where world leaders have been gathering for the Asia-Pacific Economic Cooperation summit's economic leaders' meeting. Among the hot topics is the souring China-Japan relations over territorial claims in the East China Sea.

Since becoming president in March 2013, Xi has refused to consider a formal face-to-face encounter despite Abe's public requests since his election at the end of 2012, which have included sending Japanese diplomats to Beijing. The long-awaited encounter came three days after both countries agreed on a document that recognizes their differing positions on the East China Sea, which essentially means that they have agreed to disagree.

"Obviously Mr. Xi did not want to create a warm or courteous atmosphere," Kazuhiko Togo, director of the Institute for World Affairs at Kyoto Sangyo University, told the New York Times. "It was a very delicate balancing act for Xi."

If Xi grinned too much, he would alienate the nationalistic audience. If he glared, the look could further sour world opinion. So, obviously, the favorable balance was the silent treatment. While the two leaders stood on stage, Abe spoke to a room full of reporters and aides as Xi turned toward photographers.

Television footage showed Abe waiting on stage for Xi, "a departure from usual protocol in which the Chinese leader is on hand waiting for a guest," Reuters reported. The usual flags from each country were also absent.

But Japan is not alone. In fact, a number of national superpowers could have just as easily had super awkward handshakes with Xi.

The 10-country Association of Southeast Asian Nations, which includes Vietnam, Indonesia and the Philippines, also has a simmering maritime dispute with China. The vast wealth of natural gas beneath the Spratly and Paracel Islands, a chain of islands straddling the South China Sea and West Philippine Sea, has sparked a land grab among the countries. China has already built an airstrip on one of the islands. The move prompted the United States and the Philippines to stage "war games" in May, a joint military effort between 40 U.S. and 80 Filipino marines.

For his part, President Barack Obama's weeklong diplomatic sprint across Asia signals a rebalancing of focus away from the Middle East and onto the region. Japan is the second largest economy in the world while China is the third largest. Obama's priorities, which are economic in nature, are hinged on China's cooperation.

For example, purposefully ignoring a crisis (like the Hong Kong protests) to appease China make signal a carefully calculated U.S. policy toward the emerging superpower, that's trying to maintain a friendly, if sometimes awkwardly cold, relationship.

Why it matters: The dizzying analysis of body language may seem just as insignificant as the predictions of Hillary Clinton's presidential run. But one of the most calculated meetings in the history of the grip-and-grin, manifested in that awkward handshake, may just improve bilateral relations in a region that has quietly entered an arms race.

Both countries are moving to assert their dominance and with U.S. involvement increasingly the mix (simply known as the Asia pivot), the power struggle has just begun. Meanwhile, in the swirl of terse policy-talk, Internet users in China humorously portrayed the meeting between Xi and Abe.