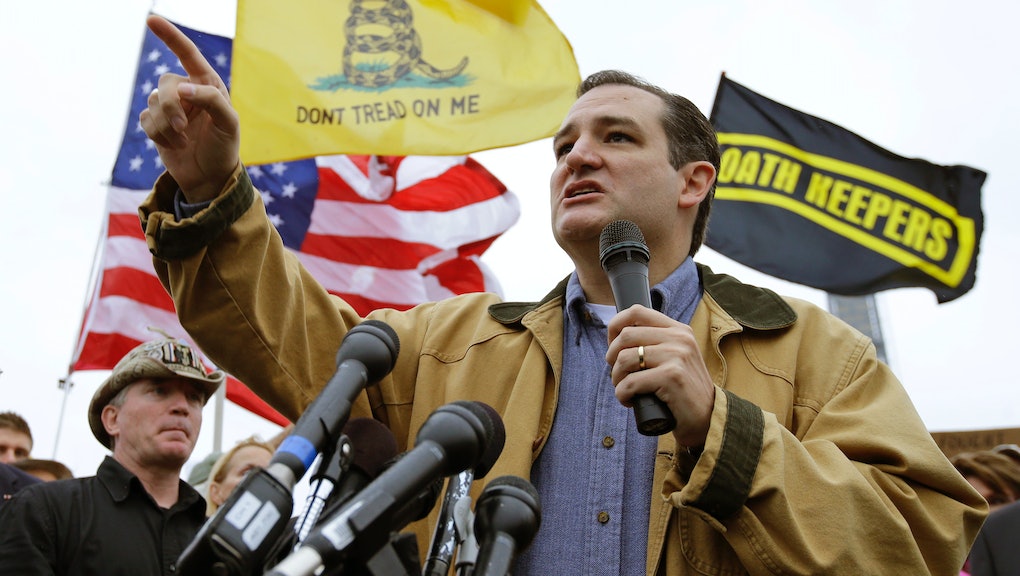 On Monday, President Obama asked the Federal Communications Commission to adopt the "strongest possible rules" to protect U.S. Internet access by reclassifying it as a utility like landed phone lines, saying in a statement that "abandoning these principles would mean the end of the Internet as we know it."

Obama's plan marks the first strong and formal step from the executive branch on "net neutrality," a principle that would prevent Internet service providers from allocating more or less bandwidth based on the type of content you're enjoying, from Netflix streams to tweets. So far, it's most been met with applause by the online community. But not everyone's happy. Enter everyone's favorite non-American super-American Sen. Ted Cruz (R-Texas) and this tweet:

Clearly, Cruz is not a fan of Obama's plan to stop the potentially dangerous practices — like "blocking," "throttling" and "paid prioritization" — that could arise without net neutrality, and while a lot of people may argue against Obama and his various plans, opposition coming from Republican leadership like Cruz requires a bit more consideration.

The thing is, while many people are worried ("Ted Cruz's Net Neutrality Take Isn't Just Dumb, It's Dangerous," writes Gizmodo's Kate Knibbs, while T.C. Sottek of the Verge writes, "Ted Cruz just called net neutrality 'Obamacare for the Internet,' and that's bad news for everyone"), it would actually be great if the senator turned out to be right.

Yes, fingers crossed that Cruz is right and "'net neutrality' is Obamacare for the Internet." Here's why:

Because Obamacare is working, you blithering buffoon.

As much as Republicans have tried to undo, revamp or tweak the president's Affordable Care Act (upwards of 50 times, at this point), the fact of the matter is that Obamacare is working. Whether it's a giant corporation like Walmart demonstrating the law's success, various polls pointing to the majority of Americans' favorable views of the law or the very simple fact that health care premiums continue to clock in at lower-than-expected rates, one thing is clear: Obamacare is working.

In case you need more evidence, Jonathan Cohn of the New Republic assembled "7 Charts That Prove Obamacare Is Working," including the very basic and important fact that fewer and fewer Americans are uninsured, as demonstrated by this graphic from Gallup:

And yet, despite all of this, "Republicans Still Can't Admit What Everyone Knows About Obamacare," notes Mic's Gregory Krieg.

Sure, net neutrality and Obamacare are very different issues with varying intricacies and problems, and unlike the ACA, which was a law Obama backed and signed after it was passed through Congress, the president's latest net neutrality statement is merely a request to the FCC. However, despite Cruz's awkward amalgamating, there really is a funny overlap between health care and Internet access in America: Both are supremely expensive and unfortunately inadequate compared to much of the rest of the world.

But if the Republicans' approach to discussing net neutrality is anything like their approach to the ACA, then we can only hope the next few months will go like this:

2. Obama and the Democrats hold their ground just enough to make net neutrality a reality.

3. The FCC will enact net neutrality rules, and the GOP will still call them evil and try to repeal everything.

4. Despite their biggest objections, net neutrality will work, and it will work really, really well.

That's basically how things went, and continue to go, with Obamacare. Hopefully Cruz is correct and we'll have the same outcome for net neutrality.

So, thanks for the well-wishes, Teddy. Hopefully you're right.