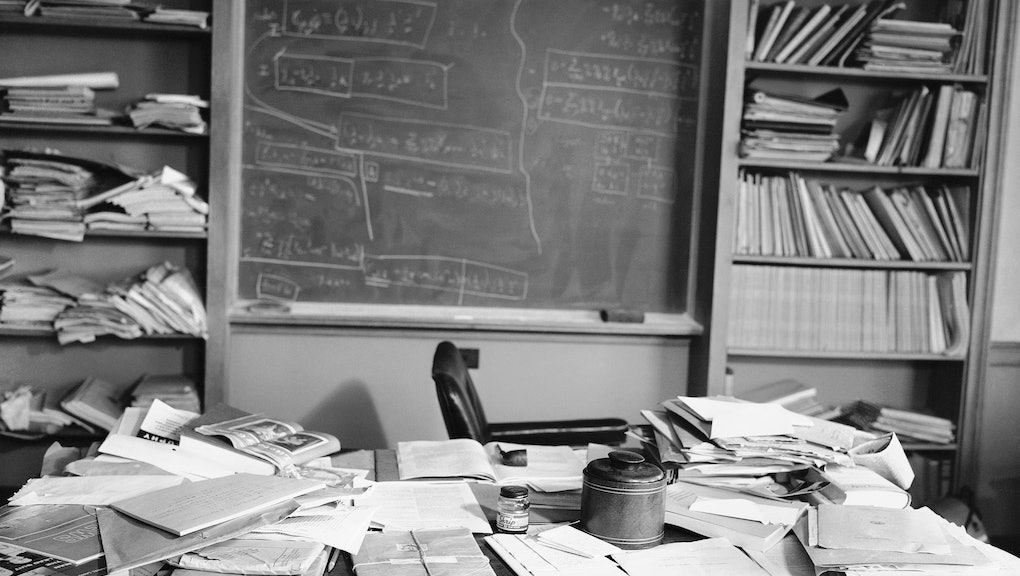 Are you too messy? Instead of a filing cabinet, do you have piles of folders bursting to the seams? Is your Rolodex covered with doodles, while your drawers are full of loose business cards? Do memos arrive at your desk only to be tossed in an overstuffed trash can or linger in eternity amid a heap of their forgotten brethren?

We're trained to think that messiness is evil and unproductive. But there might be a method to all that madness.

It turns out science can explain. There's fairly robust psychological evidence that messiness isn't just symptomatic of poor standards or effort, but might actually provoke creativity.

That's the hypothesisis that, as psychologist Kathleen Vohs writes in the New York Times, "being around messiness would lead people away from convention, in favor of new directions." To test this hypothesis, Vohs invited 188 adults to rooms that were either tidy or "messy, with papers and books strewn around haphazardly."

Each adult was then presented with one of two menus from a deli that served fruit smoothies, with half of the subjects seeing a menu with one item billed as "classic" and another billed as "new." The results (published in Psychological Science), Vohs reports, were enlightening:

A second experiment with 48 adults found that subjects in a messy environment came up with ideas "28% more creative" while creating a list of unconventional uses for ping pong balls, even though the two groups came up with the same number of ideas. Vohs argues the results are clear: Messiness actually spurs creativity.

Columbia Business School professor Eric Abrahamson notes that the debate on messiness can overlook the crucial fact that order has opportunity costs, like forcing employees to devote valuable time to maintaining an orderly environment that could otherwise be spent on projects. He argues:

Creativity is spurred when things that we tend not to organize in the same category come together. When you allow some messiness into a system, new combinations can result. If you keep all your tools in the tool shed and all your kitchen utensils in the kitchen, you might never think of using a kitchen utensil as a tool or vice-versa.

Of course, messiness doesn't necessarily refer to how many coffee cups on your desk need to be thrown out. Abrahamson adds that "the best studies on strategic planning indicate that firms with elaborate strategic planning systems do no better than firms that don't have them," possibly because an emphasis on order can reduce the flexibility of some companies.

On the micro level, in 2007 Abrahamson and fellow researcher David H. Freedman wrote that a messy desk could actually be a "highly effective prioritizing and accessing system" that quickly sorts items according to their importance. Piles of clutter that amass on unkempt desks may just be repositories for "safely ignorable stuff." In other words, if it looks like trash, perhaps that's because it wasn't important enough to waste time filing.

On the other hand, as Freedman told the New York Times, "almost anything looks pretty neat if it's shuffled into a pile." Order doesn't necessarily have inherent benefits in every space.

The takeaway: That's not necessarily an argument for messiness (and nothing here justifies leaving underwear on the floor). But Your Story's Malavika Velayanikal argued that there were two lessons that entrepreneurs could take away. One, employers shouldn't overvalue orderliness in a work setting, because disorder might help trigger creative solutions to problems in the workplace. The other was that employers should harness the creative energy of disorderly environments by creating "varied office spaces" instead of minimalist ones in order to help employees "break free from conventional thinking."

Basically, the emphasis on order and efficiency in work settings can be misplaced. Instead of maximizing efficiency, a rigid focus on routine can force employees to waste time on minutiae. Office Space had this lesson down: