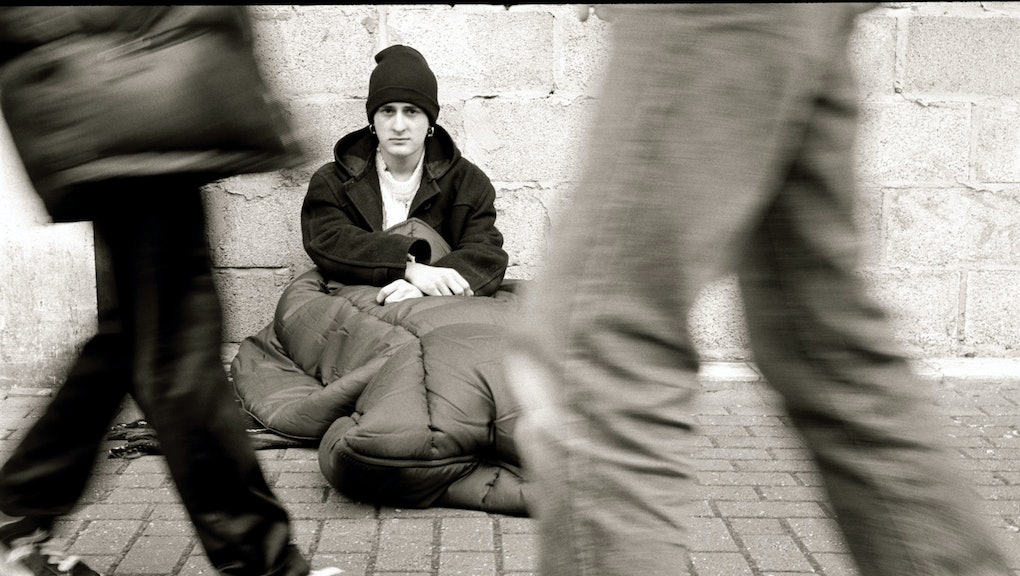 We Won't Solve Homelessness With Laws That Simply Expel Them

The United States has a storied history of attempting to criminalize things that its more conservative members find unpleasant, with the hope that they will disappear, willed out of existence. Homosexuality and marijuana come to mind as more recently failed efforts. Homelessness, however, is one phenomenon for which criminalization retains strong support.

These ordinances are only the latest of hundreds of policies in cities across the country designed to cope with the social problem of homelessness by rendering its lifestyle illegal. They're part of a disturbing trend in a country that actually has the capacity to help those suffering, instead of cracking down on the less fortunate.

Out of sight, out of mind: The first ordinance in Manteca prohibits people from sleeping or camping out on any public or private property. The second bans public defecation and urination (which happens to coincide with the city's closing of park restrooms, where most of the homeless population is able to use restrooms privately).

While people who violate the new law won't be imprisoned and aren't likely to have to pay fines, the policy is expected to encourage the homeless population to leave the city. The city's police chief reportedly opposes any form of shelter for people who are homeless.

Part of a larger trend: Ordinances intended to outlaw activities that a homeless person essentially must engage in to survive have passed in nearly 200 cities across the country in recent years, according to ThinkProgress. Begging, sitting, lying down or sleeping in any public space have been outlawed in scores of cities nationwide.

In September, a city in Florida established a fund that buys one-way bus tickets out of town for its homeless population.

Perhaps the most widely criticized of these measures are rules that, in effective, make it illegal to give food to the homeless in public. In Fort Lauderdale, Florida, a 90-year-old man was arrested for attempting to feed the homeless in his city in October.

The National Coalition for the Homeless published a report last month that found that since the beginning of 2013, 21 cities have successfully restricted the practice of food-sharing "through legislative actions or the intensity of community pressures to cease distributing food to those in need." Even more have attempted it:

We haven't seen rates of homelessness like today's since the Great Depression. A population roughly the size of the nation's capital doesn't have a place to sleep every night. Housing subsidies have become a relic of the past.

There are many ways to approach ending homelessness, but creating policies that render the homeless invisible or simply expel them from your city isn't one of them.