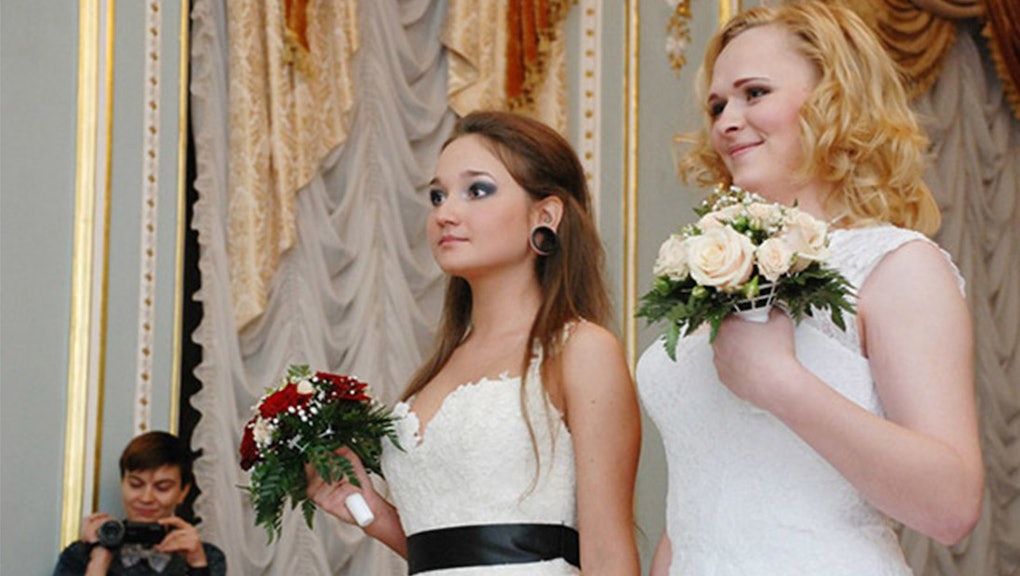 After the the two brides, Irina Shumilova and Alyona Fursova, both in traditional wedding dresses and holding bouquets, officially tied the knot, they shared photographs of the event on the social network VKontakte, the "Russian Facebook."

How did they do it? In their effort to validate their relationship, the couple found a legal loophole in Russian law against same-sex marriages. Under the Family Code of Russia, marriage is a "voluntary consent of a man and a woman."

Despite the country's ban on same-sex marriage, the couple's wedding was permitted because Shumilova was born male. She identifies as transsexual, rather than transgender. Shumilova is also in the process of gender reassignment surgery, but is still identified as male on her passport, according to RT.

"Transgender is a term to describe discrepancies between social and biological sex. I am transsexual, meaning that despite the fact that I have XY chromosomes, psychologically I am a woman," she told RT.

The reaction: The couple's marriage signified a protest against opponents of gay rights, and it's already causing a stir in this notoriously anti-gay country.

St. Petersburg lawmaker Vitaly Milonov, a known anti-LGBT politician, vowed to launch a probe to check the legality of the marriage, which he called an "ugly insult" to Russian families, the BBC reported.

Despite the questionable legal loophole and outside threats to probe the legality of their union, the newlyweds and their advocates see the union as Russia's first married LGBT couple.

"This is a big step for all of us," bridesmaid Marina Teodori told RT. "Most of us want to formally get married, but in Russia it is still impossible. For us, this is the realization of our dreams. We hope many will have this opportunity."