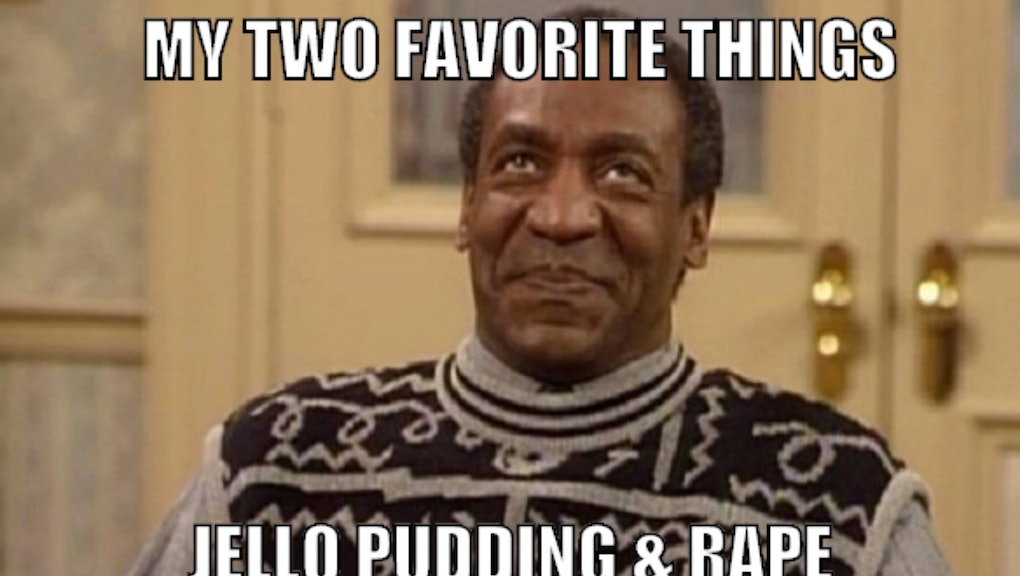 The news: It started with just one ill-advised tweet from the official Bill Cosby account challenging the Internet to "meme me."

Then it got real rude, and fast. Cosby is in the news right now for accusations that he drugged and sexually abused at least 13 women over the course of his lengthy career. So, his #CosbyMeme hashtag was basically an invitation for the entire Internet to attack the performer en masse.

And the assaults on Cosby were unmerciful and unending:

The background: Though Cosby (or someone who works for him) may have unintentionally made it easier to attack him directly using his own hashtag, the fact remains that Cosby's reputation in the public sphere has so far survived the rape allegations mostly intact. Mic's Maureen Shaw pointed out in October that the allegations date all the way back to 2004, meaning that this latest resurfacing of Cosby's alleged history of rape is more or less a blip on the radar. He even won a Marian Anderson Award for his positive social impact in 2011.

Cosby's fame and fortune, as well as prosecutors who failed to pursue charges, afforded him a way to move forward without widespread public attention. His fans similarly ignored them. As The New Yorker's Kelefa Sanneh wrote in a recent profile of Cosby: "no doubt many of his fans will find it easier to put the claims out of mind or, especially if more information emerges, to put Cosby out of mind instead."

Why you should care: Just a few years ago observers may have chosen to look the other way even as more women stepped forward, but claims that Cosby is a serial rapist have found their way back into mainstream attention. It started in February with Gawker's Tom Scocca, who told The Wrap he raised the issue when he realized "it had been there for people to be appalled by all along, if they'd chosen to remember it." Juxtaposed alongside other brewing scandals like Woody Allen's alleged pedophilia, Cosby's dismissed history of sexual violence is suddenly back in the limelight.

In a now-famous routine in October, comedian Hannibal Buress called Cosby out for passing through the minefield of accusations unscathed:

"And it's even worse because Bill Cosby has the fucking smuggest old black man public persona that I hate," Buress said. "Pull your pants up, black people. I was on TV in the '80s. I can talk down to you because I had a successful sitcom. Yeah, but you raped women, Bill Cosby. So, brings you down a couple of notches. ... I've done this bit onstage, and people don't believe. People think I'm making it up. ...That shit is upsetting. If you didn't know about it, trust me. You leave here and google 'Bill Cosby rape.' It's not funny. That shit has more results than Hannibal Buress."

Now, thanks to a botched hashtag, posts accusing Cosby of rape now have more results on Twitter than those reinforcing his homey, pleasant Dr. Huxtable persona.

It's pretty awful that Cosby will likely never face any kind of justice despite the mounds of evidence. But by continuing to expose the painful details implicating him in terrible crimes, we can at least ensure they won't be forgotten.