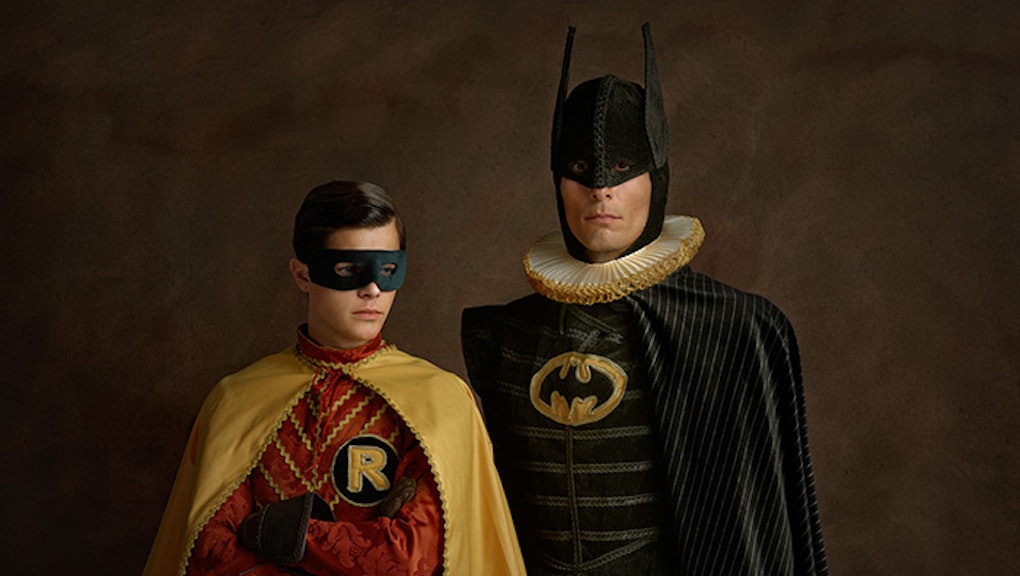 Your Favorite Superheroes Get a Fantastic Renaissance Makeover

Instead of scaling skyscrapers, looks like Spider-Man's going to be busy crawling up the sides of the Sistine Chapel.

French photographer Sacha Goldberger has taken our favorite spandex-clad heroes, villains and space travelers to the time of dukes, princesses and monarchs. The age of nobility has never looked so cool.

"It's such a beautiful period in painting and portrait. I like the poses, the lights... everything," Goldberger wrote in an email to Mic. The portraits not only showcase the masked figures in a Renaissance style, but also use techniques from the period to capture the images.

More than 110 people helped make the project happen, including five costume designers, seven makeup artists, five hairdressers and 60 actors. The costumes were designed and made by Jackie Tadeoni and her team. It took three months of alteration to perfect the digital images.

As for Goldberger's favorite? "Hulk, because it was the [most] complicate[d]," he said. "It took time to find the perfect position. I wanted him to be romantic."

In the series' press book, Goldberger talks about how these beings are forever trapped in their character. Through the intersection of science fiction and art history, he expands on these characters' stories. Batman will always be remembered as a hero in a time of metropolitan cities and tech gadgets. By taking them to a time where those sorts of advancements have not happened yet, Goldberger has reappropriated their stories and sparked questions about how these heroes would exist in a time without the progress society has made with technology.

(And if you want to see more, there's a time travel plot in Neil Gaiman's 1602 miniseries that sticks Marvel heroes into a different historical period.)

You can check out the rest of the photos here.

Editor's note: Quotes from Goldberger have been edited for clarity.