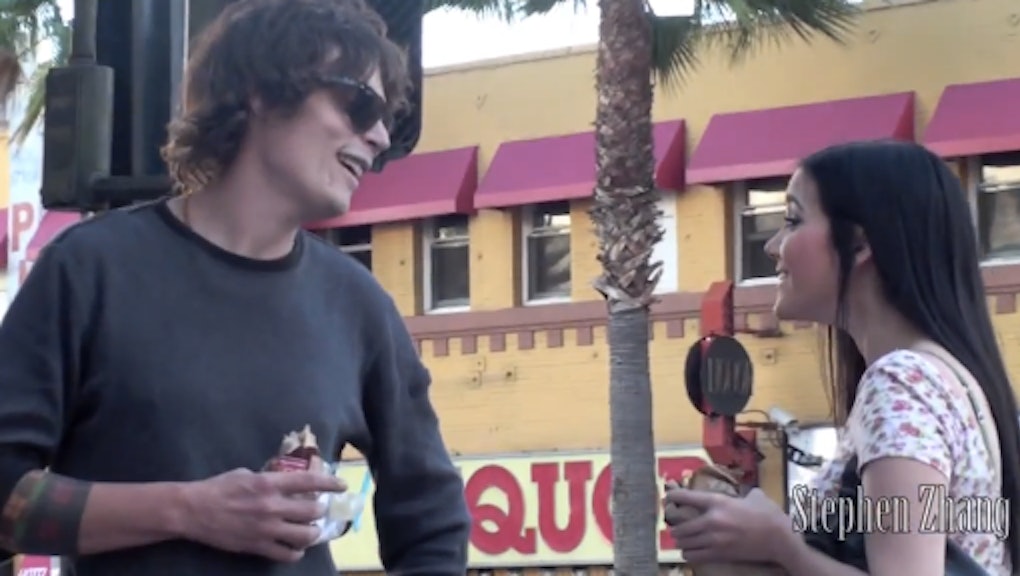 Viral marketer Stephen Zhang recently released a video of a "social experiment" recording men's reactions to encountering a drunk woman on the street looking for a bus.

It's surprising how unsurprising the results are: The majority of men in this highly unscientific experiment, instead of helping the drunk woman find her bus or seeking additional help, try to lure the woman back to their apartments.

"Yeah, come over. Oh, you need a bus stop? There is one right in front of my house. Here, get in my convertible van!" one man excitedly tells her. In another, almost Animal Planet-like scene, one guy begins to escort her back to his place when another interjects, because "she's going home with [him]," and then steals the woman away.

Videos like this one and like Hollaback's viral catcalling video reveal how pervasive rape culture is in America. Women are not safe on the streets: At every turn, and especially, as this video shows, when they appear vulnerable, men try to possess them.

This video, of course, has a happier ending. Just as the men seem about to successfully squire their drunken charge away, she stops cold in her tracks, magically sober.

Needless to say, the stunned reactions are priceless:

This isn't the first time this social experiment has been carried out with a hidden camera. ABC's What Would You Do? created a scene in which two actors, one woman pretending to be drunk and one man trying to take her home, test how outsiders would respond to a stranger trying to lure a drunk woman home. Women, in addition to older men who were parents themselves, stepped in to protect the young girl. However, young men offered the male actor advice about how seduce the drunk woman. They supported and even congratulated his endeavor.

Bro culture, as shown in the What Would You Do? video, encourages men to act this way, as affirmation of their masculinity. Indeed, when the video got picked up by website Total Frat Move, the headline — and plenty of the commenters — all seemed to think the actions of the men in the video were totally normal.

The problem, it seems, is that masculinity is defined by this kind of dominance. Blame social Darwinism, blame pop culture or just blame the men who consciously act in such ways. Rape culture can only be cured when men take responsibility for their actions, and this begins with a reimagining of what it means to be a man.

Article Update (11/13/14): The "Drunk Girl in Public" video featured in this story, according to the Smoking Gun and the Daily Intelligencer, was a staged social experiment conducted by its creator Stephan Zhang. Zhang solicited the men to participate in the shooting of the video.