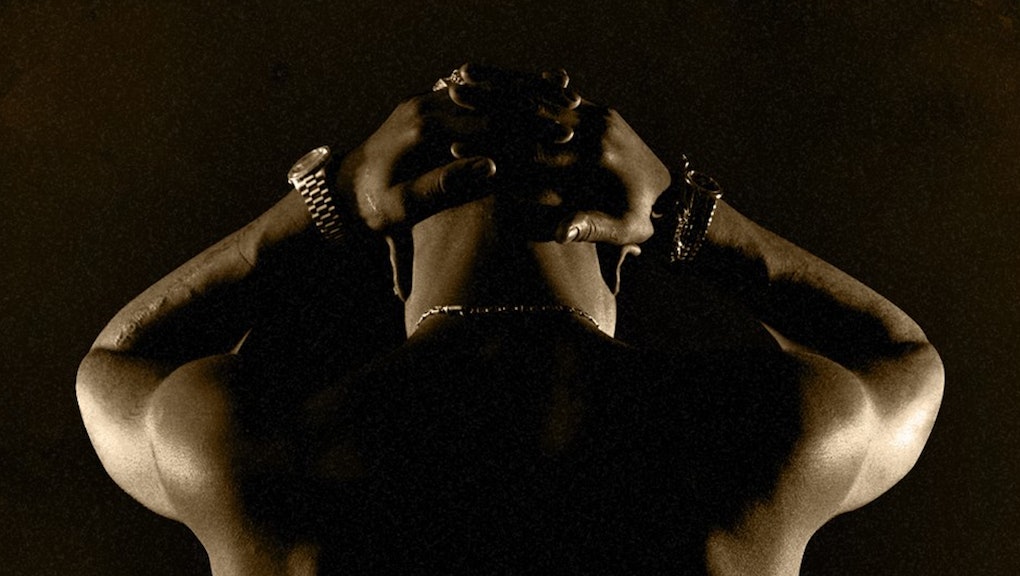 Is Tupac Alive? This Man Would Like You to Think So

This past May, Tupac came back to life.

A little way into Wyclef Jean's music video for "April Showers," there's a scene in a morgue. Jean's brother, Sedeck, is performing autopsies on two women. Suddenly, Tupac's body appears on the gurney in shocking detail. It caused a stir — the video was removed from YouTube soon afterwards due to a "copyright claim" that the brief shot may have been an actual autopsy picture of Tupac.

But it wasn't Tupac — not exactly. The footage was of Richard Garcia, a 39-year-old substitute teacher living in New Jersey and working part-time at the local supermarket, who has devoted his life to becoming Tupac.

Meet Richard Garcia: Tupac Shakur was born on June 16, 1971. Richard Garcia was born on the same day, just four years later. He looks exactly like Tupac. And as he grew up, it turned out that the two shared far more than a birthday.

"I enjoy doing the things that I do [as Tupac] because I can share my image," Garcia told Mic. "It's not just the birthday, but the upbringing."

Garcia has devoted much of his life — and body — to preserving the message at the core of Tupac's music. But he isn't only a professional impersonator. He rarely does gimmicky appearances as 'Pac, and he doesn't think of it as his career. For him, it's an act of personal devotion, a way to prolong a life that was cut unjustly short.

Slowly, though, his life has merged with Pac's own in strange and powerful ways.

Like Tupac, Garcia had a tumultuous upbringing. Both Garcia and Tupac were raised by single mothers, often moving from one place to another. At 17, Garcia had dropped out of high school and was on his own. But it was during that time when he truly found his calling by embodying Tupac. A high school friend told Garcia that if he shaved his head, he would look exactly like Shakur. It wasn't the first time somebody would see the connection, but as Garcia found a deep faith in the message of Tupac's life and music, Tupac's life started seeming like it was reaching out to him.

"I was in Pathmark [a grocery chain] and [a man] was staring at me. And I was staring back at him," he said. "My wife was like, 'You know this guy?' And I was like, 'Yeah, that's Tupac's father!' ... The next thing you know, we just exchanged numbers and became friends. And we stayed really good friends. He helped me out a lot of times when I was going through my father's death. I had reached out to him, and he helped talk me through that."

Shortly thereafter, in 2010, he met Tupac's mother, Afeni Shakur, at an event in Atlanta.

"I had just graduated from college, and meeting Afeni was a birthday gift from my wife," Garcia said. "Afeni saw me and she picked me out of the crowd. There were other Tupac look-alikes there, maybe three or four of them. But Afeni actually told her security to pull me out of the line. We hugged and she started crying — it made me cry. She said to me, 'Keep doing what you're doing. Never give up. Sometimes what you're doing [as Tupac], it's going to be stop-and-go.' And she was right."

Less than a year after that, during the audition process for an Antoine Fuqua biopic of Tupac in 2011 (which never fully formed), Garcia met Frank Alexander, Tupac's former bodyguard and close friend. Alexander offered him acting advice over the course of several weeks, giving him tips and insight about 'Pac and his ways. The two were friends until Alexander's death in 2013.

"He once said to me, 'You remind me of 'Pac a lot, Rich. Just the way you talk,'" Garcia remembered.

But Tupac's friends and family weren't just responding to the resemblance. Garcia is uniquely committed to Tupac's spirit. That's what seems to have led him improbably to the rapper's family and close affiliates. And it's what makes his appearance more than an act.

"Tupac's legacy is every bit of my career. And the kids swear up and down that I'm 'Pac. ... They tell me, 'I know Tupac's music!' So I tell them to really listen to the words that he is saying [in his songs]. And I use what he says as a positive guide."

You won't find New Jersey's Tupac rapping much, then, but you'll still find him teaching. He uses lyrics from "Hold Ya Head" and "Keep Ya Head Up" to teach his students to see positivity in challenging or difficult situations, rather than resorting to the violence or bragging of a lot of modern rap. Garcia wants them to see Tupac's lyrics and aura as a force to overcome negativity. Though he isn't able to reveal one of his Tupac tattoos — an image of an AK-47 with the words "50 Niggaz" written across it -— in the classroom, he frequently references it as an educational point. He often tells his students, "Tupac said there are 50 states in the U.S. If we take a smart black or Hispanic man from each state, that's 50 men. Fifty men is stronger than a gun."

And one man's spirit is stronger than anything else.