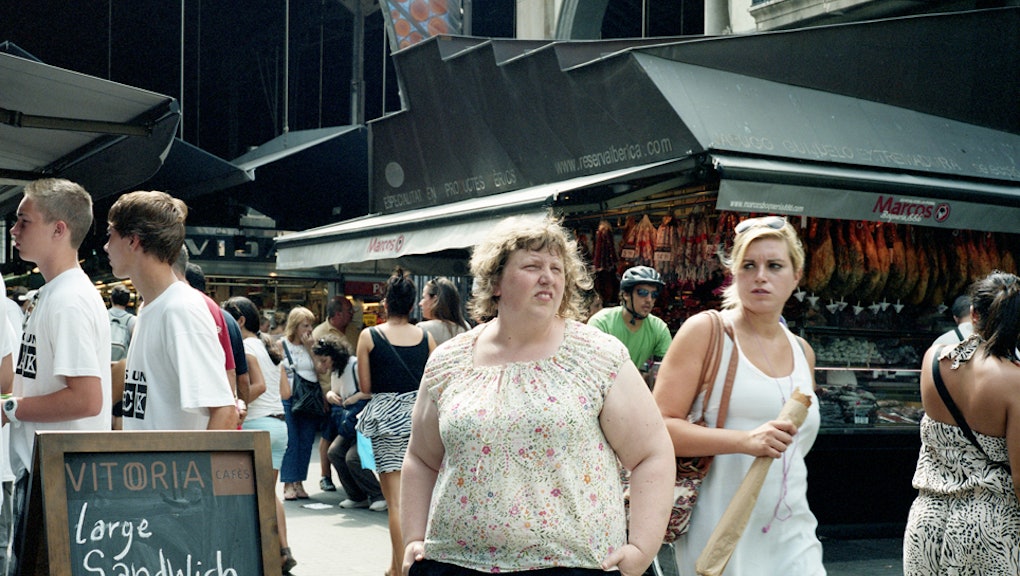 America has a body image problem.

Despite increased efforts by advocates, negative views of anyone who wouldn't fit in an American Apparel size small, from pop culture and the fashion industry, have proven difficult to shake. Indeed, if you read most comments on any article about weight loss or plus-size models, it's clear there's an uphill battle against body-shaming, despite the fact that 69% of American adults are considered overweight or obese by the Centers for Disease Control and Prevention.

But now more than ever, voices have emerged to push back, affirming that there's indeed health and beauty at every size. Haley Morris-Cafiero is one of those voices. The photographer's new book, The Watchers, illustrates just what happens when a fat person dares to occupy public space.

It's a phenomenon Morris-Cafiero said she unwittingly stumbled upon after setting up self-portraits for a project four years ago, only to discover an odd trend in most of her proofs: People couldn't help but stare at her plus-size body.

The initial project, dubbed Wait Watchers, formed while Morris-Cafiero was creating a series of self-portraits where she photographed herself in places where she thought about her weight, including vacations, restaurants and swimming pools. But the bent of the project changed once she observed the constant presence of people gawking and smirking at her in the background.

That revelation would become her inspiration.

"I was thrilled at the ability to capture that one fleeting moment in time but never expected to be surprised by another person's gaze at me, and being so obvious," Morris-Cafiero told Mic. "I guess most people would have expected me to be hurt, but instead, I felt empowered. Little do they know, I actually love myself."

She is quick to note that the issue isn't just about fat people occupying public spaces, but about how people view body image, both in the conceptual and the literal sense. It's undoubtedly influenced by nasty stereotypes and tropes that have long proclaimed that fat is something to be ashamed of and eradicated, rather than a normal part of having a human body.

In the years since beginning Wait Watchers, her project has gained widespread media attention, as well as plenty of the same kind of judgmental reactions she has long since become accustomed to. Most of those responses, she said, were critical of her physical appearance, from how she wears her hair to her clothing choices and even her face.

Undeterred, Morris-Cafiero used the reactions, both negative and positive, to  push even further, launching a Kickstarter campaign and now a book, complete with even more pictures.

"The newer images are me responding to anonymous critics in the viral articles who say that my life would be better if I got a makeover and lost weight," she said. She's now moved away from doing everyday tasks like walking, sitting and eating to doing things many folks said she should do for "self-improvement" and weight loss — activities like jogging, roller-skating and shopping. "The gaze may change," she said, "but the thinking behind them remains the same."

Hopefully her book will illuminate how, even in a tiny moment, your gaze can affect how someone else thinks about their body. Morris-Cafiero particularly targets her message toward young people and women, who tend to suffer most from the stigmatization by cultural beauty standards.

"This obsession is affecting teenage girls much more than it has in the past," she said. "I hope that I inspire anyone who may have a doubt about who they are and stop and think about how much they have to offer, instead of what they should look like."

Overall, Morris-Cafiero wants to inspire other people to love themselves, no matter what their size — a love she's not afraid of expressing herself. "I love the way that I look and I am not going to change for anyone," she said.