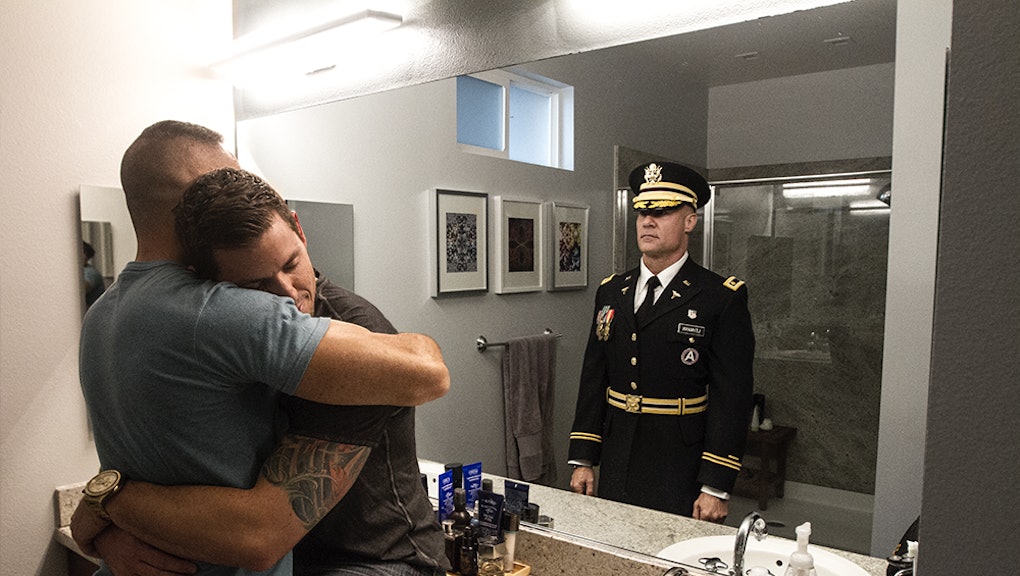 Powerful Photos Reveal the Diversity of the Humans Beneath the Uniform

"The military community has expressed their interest in using my art to communicate how many of them feel to be living double lives while serving in the military," Mitchell told Mic. "People who have never served have shown interest in knowing more about the diversified aspects of what causes veterans to feel that way."

And this is just the beginning. Mitchelll said he wants to shoot "at least 10,000 of these over my lifetime, including at least 30 Congress members, three generals and one United States president, current or former."

Mitchell, a proud gay man, knows what it feels like to lack of equal protection under the law. It wasn't until 2010 that the federal government repealed "Don't Ask, Don't Tell," a law that prohibited lesbian, gay and bisexual military personnel from serving openly as queer individuals. (Despite the efforts of advocates, transgender individuals are still unable to serve openly in the United States military.)

With this project, Mitchell has taken pains to represent the veterans of different races, sexual orientations, religions and gender. "It is a really big deal, in my opinion, that sometimes people are denied jobs on the basis of what they look like, they are not equally considered for various opportunities, and in some jurisdictions, are good enough to serve but not good enough to qualify for equal protection under the law," he told Mic.

The use of the mirrors was intentional, of course. "It's kind of an optical illusion to tell their stories of who they were when they were in the service and who they are now,” Mitchell told ABC 15.

Ideally, people who view this project will come away with a better understanding of those who fight and die fighting America's wars all over the world. "I really hope that people see who is protecting them, who is serving them and who is sacrificing their individuality by issuing themselves to the government,” he told Mic.

All images courtesy of Devin Mitchell