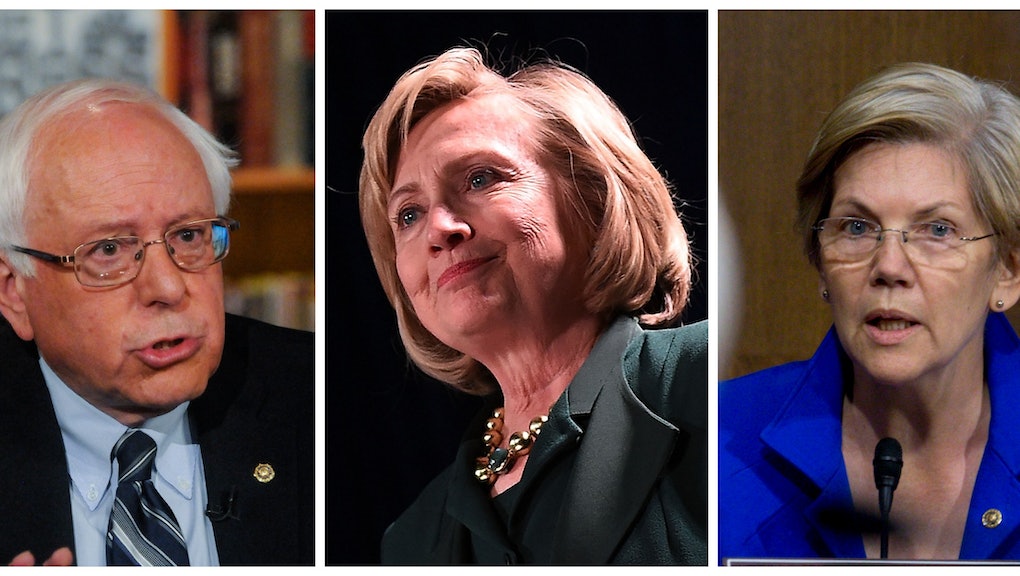 Hillary Clinton's path to the White House is beginning to take shape, and if the former secretary of state's own plans are any indication, she sees liberal stars Sen. Elizabeth Warren (D-Mass.) and Sen. Bernie Sanders (I-Vt.) as potential hurdles on the way.

MSNBC reported that Clinton and her team have scheduled an unlikely powwow with leaders at the Progressive Change Campaign Committee, the small Democratic group most strongly aligned with Warren and the populist economic agenda championed by Sanders.

Clinton, who is unlikely to formally enter the race until the spring, has already been criticized for being too tight with the wealthy donors and corporate leaders who have supported her in past campaigns, advised her while in office and given millions to her husband Bill's Clinton Foundation.

Post-election blues: That narrative took flight after Democrats, including at least 13 of the 26 Clinton campaigned for this fall, were rocked at the polls on Election Day. When a party takes a beating like that, its establishment leaders take the fall and new voices — or, at least, unfamiliar ones — begin to get more play.

Progressive Change Campaign Committee co-founders Adam Green and Stephanie Taylor are among them. They sent a message to Democrats after the midterms, scolding the party for engaging in a "Seinfeld-ian election about nothing" and declaring that "Warren was the most popular Democrat on the campaign trail for a reason: Her message of taking on Wall Street, reducing student debt and expanding Social Security benefits."

Sanders, the Senate's only socialist, is reading from a similar policy book. He, too, is trying to build a grassroots progressive movement with a particular focus on driving money out of politics, fighting income inequality with higher taxes on the rich, reducing the price of higher education — to nothing, in some cases — and upgrading from Obamacare to a government-subsidized single payer health care system. His recent hiring of veteran campaign hand Tad Devine is the clearest signal yet Sanders is planning to run.

Problems from the left: This creates real a real conundrum for Clinton, whose ties to the people and organizations scorned by the left go back decades.

"Many of her best friends, her intellectual brain trust [on economics], all come out of that world," a longtime political aide to Hillary and Bill Clinton, told the New Republic last year. "She doesn't have a problem on the fighting-for-working-class-folks side, but it will be hard, really wrenching for her to be that populist on [finance] issues."

"Wrenching" though it may be, taking on these issues and the politicians and groups driving the discussion now is a smart political move for Clinton and her Democratic Party backers.

Because when the real campaign begins, the Progressive Change Campaign Committee, Warren and Sanders will all be there. Sanders is the most likely to actually run against her, and the Warren faction is a necessary ally in winning the Democratic primary.

More importantly, Clinton will need the support of their devoted grassroots troops when it's time to take on the Republicans. Progressive voices will be loud right through Election Day. Hillary needs them speaking up for her.