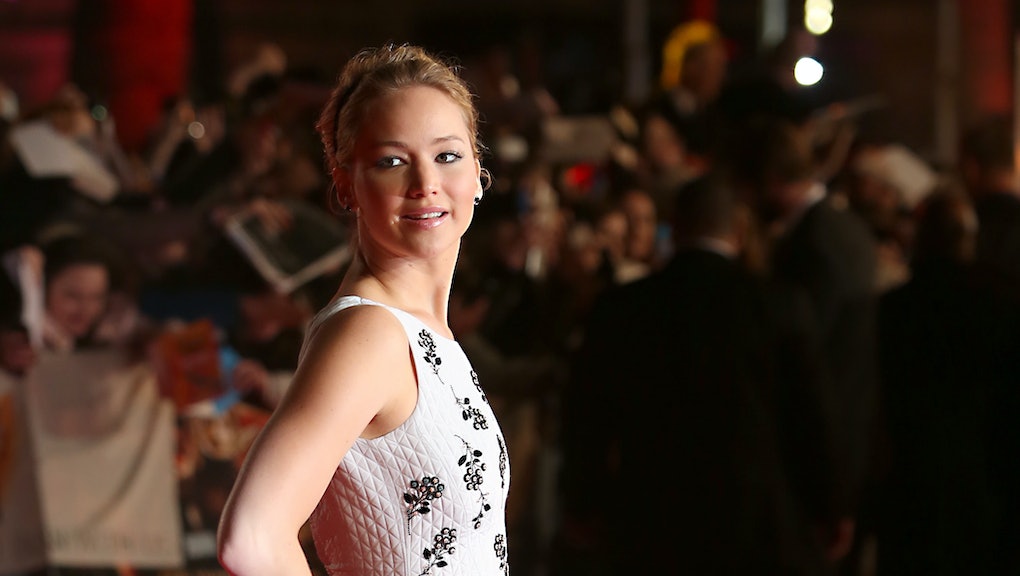 Jennifer Lawrence is done with the Internet, and her reasons say a lot more about us than they do her.

In a recent interview with BBC Radio 1, Lawrence explained that she decided to quit the Internet weeks ago, likely in the aftermath of the invasion of her privacy and leaking of nude photos by hackers:

Because the Internet has scorned me so much I feel like it's that girl in high school, that I'm like, 'Oh, you wanna talk about her? Yeah, I'll do that... Take my hoops off, I'm ready to go.'

While hearing about a 24-year-old who isn't constantly connected to the Internet sounds inconceivable, given September's blatant breach of numerous female celebrities' privacy, Lawrence's decision is completely understandable.

"It is a sexual violation," Lawrence told Vanity Fair in October, breaking for the first time her silence on the leak. "It's disgusting. The law needs to be changed, and we need to change. That's why these websites are responsible. Just the fact that somebody can be sexually exploited and violated, and the first thought that crosses somebody's mind is to make a profit from it."

This says more about our culture than it does about Lawrence. Being a public figure, Lawrence's ability to realistically enjoy the same level of privacy as 'normal people' is unclear. But either way her ordeal and subsequent Internet anxiety speak to a larger problem.

The early September leak was not an isolated incident of one hacker's villainy. Thousands, if not millions, of online users were complicit in sharing the photos, turning them into a viral sensation and ensuring that Lawrence's private life was laid bare for the world to ogle. It's not as though one programmer in a seedy apartment committed an isolated crime; countless Internet users were complicit, spanning an unfathomably complex network of sharing, posting, downloading and judging. Without her doing anything besides expecting a reasonable amount of privacy, Lawrence was victimized by thousands of faceless people.

But it's not just Lawrence. The Internet continues to be an unsafe place for women. In January, Amanda Hess shared the tribulations of being a woman who writes about sex and gender issues. The price of covering these topics? Tweets from psychotic men threatening to cut your head off.

Recent calls for the gaming community to be more inclusive of women have resulted in similar violence. Anita Sarkeesian, a feminist and vlogger who discusses gender issues in video games, and developers Brianna Wu and Zoe Quinn have all faced violent threats for being active voices in opposition to #Gamergate. As the Atlantic's Robinson Meyer points out, these incidents raise a variety of issues surrounding online life, such as whether putting your life online comes with too many sacrifices. While Twitter and Facebook might be vast storehouses of information, the costs of participation — especially for women — are becoming far too high.

What is normal? It's also important to point out that even when a celebrity does something innocuous, there's nowhere to hide from Internet commenters. When Lawrence famously tripped at the Oscars in 2013, she became Hollywood's newest sweetheart. The thought, "Look! She's clumsy just like me" coursed through everyone's mind. But when she took a tumble on the red carpet in 2014, people accused the fall of being staged and lambasted Lawrence, replaying the clip over and over.

Furthermore, it's not as though Lawrence is actively doing anything to incite the online community. She doesn't even need to be on Twitter or Instagram for the masses to make assumptions about her. Anything she does attracts more than just a little buzz. It's harassment, it's judgment and, unfortunately, it's the Internet.

But even for other, more social media-savvy celebrities, networks like Facebook and Twitter have become double-edged swords. With each new message, there's one more possible fan, one more possible moviegoer, album buyer or, in the case of a politician, voter or donor. But too many people now expect those they admire to be accessible and tweetable, vying for attention through pleas and barrages of messages, without any semblance of decency or courtesy. Or, even worse, Internet users capitalize on these social channels to hurl the kinds of slurs, angry grievances, death threats and horrid invasions of privacy that are ruining the Internet.

So what's next? At the end of the day, the Internet is a dangerous place for women, with hackers and trolls stealing intimate photos and throwing around threats of physical violence. But we can't blame the abuse on the celebrities like Jennifer Lawrence. Nor can we blame the abuse on the Internet itself. The problem is not the system of tubes, wires and Wi-Fi signals that beam data around. The problem is the humans manipulating that data for vile ends.

So JLaw, you're totally right. Stay away from the Internet. It's filled with people, and people are freaking monsters.