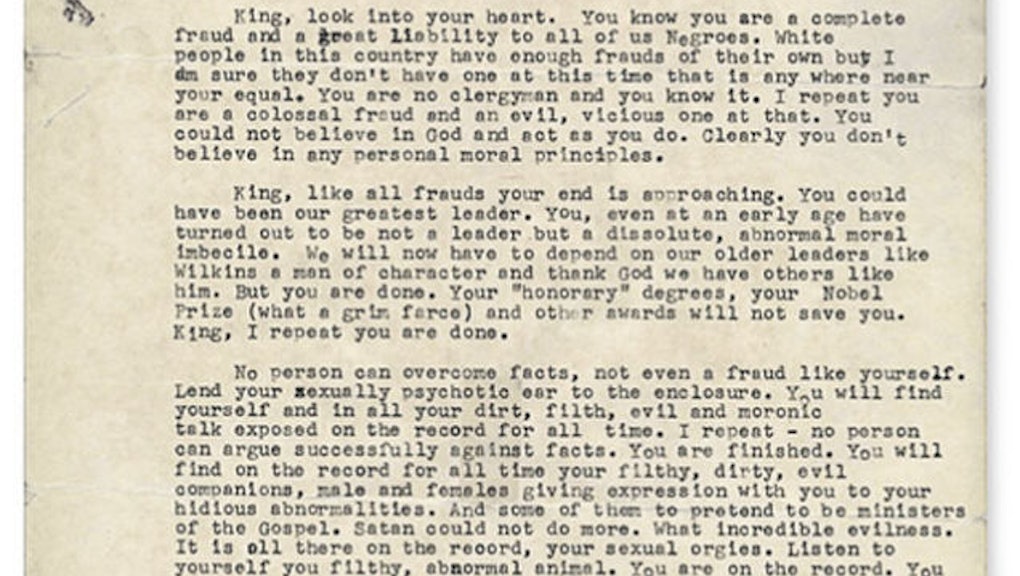 In 1964, Martin Luther King Jr. received an anonymous letter that went into graphic detail about his extramarital sex life. The letter threatened to reveal King's true character to the American public as an "evil, abnormal beast" and warned him that "there is but one way out for you."

The missive was written by agents at the FBI, to intimidate King into leaving the public eye forever. In the 1960s, the bureau's director, J. Edgar Hoover, conducted a sustained and, at turns, desperate campaign to discredit King's standing and disrupt the civil rights movement.

One of Hoover's deputies wrote the letter, which is packed with such a cartoonish density of pejorative language that King and his peers immediately determined that it was the work of the FBI.

The letter has been known of for some time, but only recently did Beverly Gage, an American history professor at Yale, stumble upon a full, unredacted version in the National Archives. She writes about the letter in the New York Times Magazine:

The word "evil" makes six appearances in the text, beginning with an accusation: "You are a colossal fraud and an evil, vicious one at that." In the paragraphs that follow, the recipient's alleged lovers get the worst of it. They are described as "filthy dirty evil companions" and "evil playmates," all engaged in "dirt, filth, evil and moronic talk." The effect is at once grotesque and hypnotic, an obsessive's account of carnal rage and personal betrayal. "What incredible evilness," the letter proclaims, listing off "sexual orgies," "adulterous acts" and "immoral conduct." Near the end, it circles back to its initial target, denouncing him as an "evil, abnormal beast."

The letter doesn't explicitly ask King to commit suicide, but that was the conclusion drawn both by King himself and a federal investigation conducted in 1976, as well as a number of contemporary scholars.

Gage suggests that the deadline of 34 days laid out in the note was intended to have King take some drastic action before he'd receive the Nobel Peace Prize, but in fact he didn't even see it it until he returned from his trip to Norway.

The letter serves as an important reminder of the extraordinary misdeeds committed by American national security apparatuses in the 20th century. Throughout the 1960s, the FBI's COINTELPRO (an acronym for COunter INTELligence PROgram) systematized a wide variety of activities designed to surveil, repress and sabotage leftist activity, whether on behalf of racial equality and civil rights, antiwar causes or socialist and communist organizations. The program is first-rate evidence of the abuses that often surface when people in government are given great power act to covertly with no oversight.

The "You are done" letter is a valuable artifact of America's past identity and what measures must be taken to make sure we uphold the improvements we've made as a nation. The subtler takeaway is actually something important that we've lost.

Gage points out how remarkable it is that the juicy details of King's carnal pleasures that Hoover kept feeding to the press never gained traction. Indeed, it's impossible to imagine how the media class today would refrain from pouncing on any details of personal scandal, regardless of how relevant it is to the individual's public life and agenda.

This is not to say that King's behavior was excusable. But it does point to a trade-off we make when scrutinizing (often rightly) the private affairs of public figures. Had somebody wanted to drag King through the mud today purely on the basis of his sex life, it's possible he would have been ostracized before coming into his own as a leader, and robbed of the opportunity to change the world.