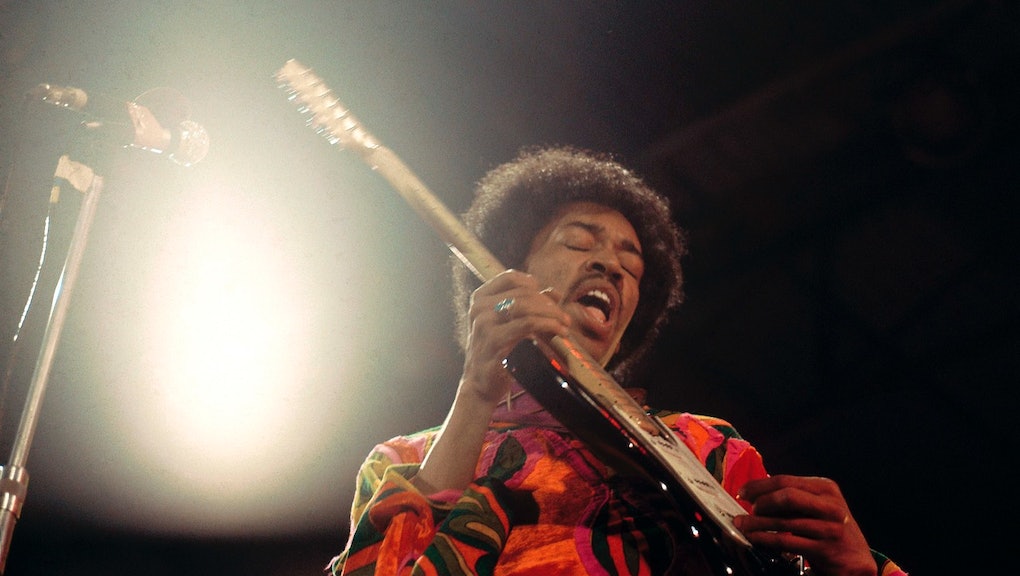 44 Years Later, Jimi Hendrix Is Still the Most Influential Guitarist of All Time

Jimi Hendrix is about to release new music.

On Wednesday, Rolling Stone reported that Hendrix's bootleg tape, Hear My Music, will finally see an official vinyl release this Record Store Day. It will likely be one of the best-selling records of the day, though Hendrix has been dead for 44 years.

The Hendrix fascination is as alive today as it ever was, and for good reason: Hendrix's revolutionary music, such as the dissonant pageantry of his "Star-Spangled Banner," is still some of the most radical and subversive in American rock canon. He pioneered new musical technologies, styles and techniques, which helped lay the groundwork for new musical genres. And his genre-pushing also gave way to important conversations that have redefined the way we discuss race in music.

Hendrix's impact on music history is so vast and multifaceted, we often forget his career only spanned four years. In those four years, he became the most influential guitar player who ever lived.

Hendrix never really understood people's feverish fascination with him and his music. "It's not unorthodox," he said, talking about his "Star-Spangled Banner" in an interview on the Dick Cavett Show, "I thought it was beautiful."

That encapsulates much of Hendrix's career. He didn't hesitate to push musical boundaries in order to bring the music he heard in his head to life; it came to him intuitively. He embraced new musical technologies, popularized the wah-wah and Octavia guitar pedals when few were even willing to try. "I'd shown it to Jimmy Page, but he thought it was too far out," said Roger Mayer, inventor of the Octavia pedal and a refined version of the wah. "Jimi said, the moment we met, 'Yeah, I'd like to try that stuff.'"

With new effects pedals, Hendrix turned common blues riffs into cosmic dreamscapes, laying the groundwork for everyone from U2's The Edge to Jack White. No one had ever heard a guitar cut like his on the opening of "Purple Haze" or a shimmer with a watery glow like the transcendent solo on "1983... (A Merman I Should Turn To Be)." Hendrix's shredding turned Bob Dylan's folksy "All Along the Watchtower" into a high-stakes spiritual battlefield. Years later, Dylan wondered why Jimi didn't cover more of his songs, explaining, "They were all his anyway."

Hendrix's progressive thinking allowed him to merge rock with genres it had never touched. Pioneers of heavy metal and hard rock frequently cite "Purple Haze" and "Voodoo Chile" as first songs of the genre.

"He must have looked like Satan to people, you know?" said guitarist Nuno Brettencourt from the band Extreme, describing Hendrix's awe-inspiring sound, "Like where did he plug in? Who told him to do it?"

But his influence on modern music ranges far beyond mere heavy metal. He has also been credited for essentially inventing rap. He was the first musician to 'scratch' (manually spinning a vinyl record) on the 1967 song "Are You Experienced," which later became one of the most iconic hip-hop sounds. Later in 1969, Hendrix recorded a 13-minute session called "Doriella Du Fontaine" with Jalal Mansur Nuriddin, a spoken-word poet. Legendary jazz producer Alan Douglas claimed it was the "first rap record ever, although it wasn't called rap back then." The similarities between today's hip-hop stylings and feel and "Doriella Du Fontaine" are obvious.

Hendrix recorded this song in the late '60s period of his career, when he was trying desperately to reach black audiences. Black radio stations had largely dismissed him as being somewhat of an "Uncle Tom figure," playing white music and pandering to white audiences. In response he fired his white band and replaced them with two black musicians. He began playing with a funkier, more soulful vibe. But the attempts to change his sound felt disingenuous to him, and by the end of his life he was back playing with his white band.

"Sometimes when I come up here, people say, 'He plays white rock for white people,'" he said. "'What's he doing up here?' Well, I want to show them that music is universal — that there is no white rock or black rock."

He introduced the world to that brash, violent, don't-give-a-fuck attitude all musical badasses emulate today. He helped popularize the practice of smashing instruments onstage. He played his guitars with his teeth, swung them behind his head to solo and set them on fire. The way Hendrix pushed boundaries, he proved that a musician can transcend race, genre and time if one stays true to a musical vision.

Because of this, Hendrix will live on in American music as the most influential guitar player to ever pick up the instrument.