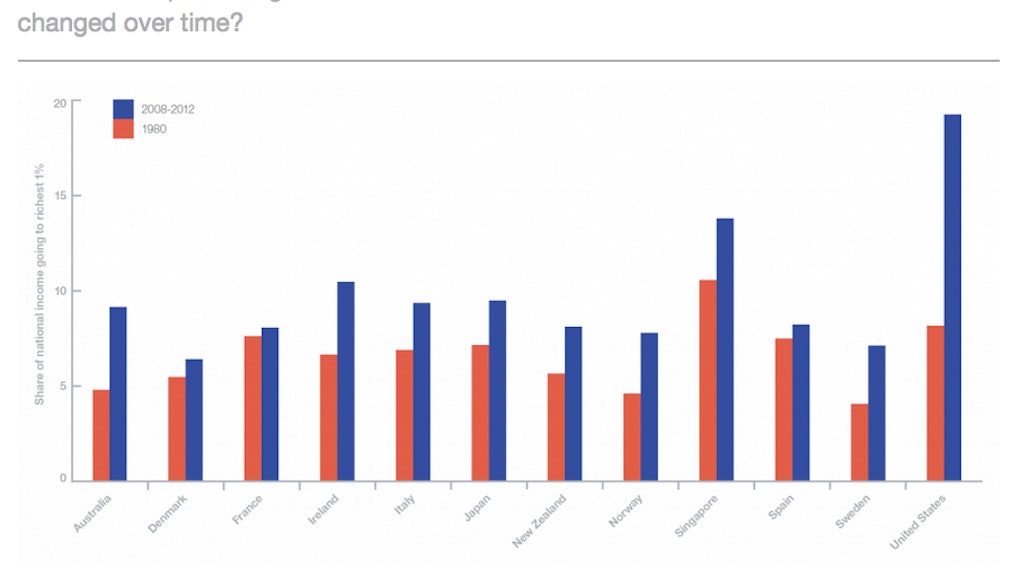 A global network of economic experts has officially deemed deepening income inequality the most pressing problem facing the world.

In the World Economic Forum's (WEF) annual "Outlook on the Global Agenda" report, the issue ranks above pollution, intensifying nationalism, severe weather events and a host of other major issues considered the "key challenges of our time." The WEF, an international organization guided by the motto "Entrepreneurship in the global public interest," advises action to ensure that leaders "leave no one behind."

As Al Jazeera America notes, income inequality has rapidly risen in the ranks for the WEF's "Outlook" in recent years. In 2011, it was "the most underestimated" global trend, and last year it was considered the second most important issue for the global community to tackle. In language echoing leftist rhetoric on wealth distribution, the report showcases charts that highlight the increasing share of wealth in the hands of the 1%:

The new report is yet another sign that inequality has pierced the consciousness of mainstream political and economic leaders — and is causing them worry. But it raises a more important question: What does this mean, for an organization like the WEF to declare inequality a problem?

Putting your money where your mouth is: The WEF is best known for arranging an annual meeting in which the world's political and economic elite, deep in the Swiss Alps, can discuss global affairs undistracted by the outside world. For a week, the snow-covered town of Davos bustles with deal-makers and decision-makers, wining and dining under the banner of lofty ideals. But nothing of consequence for anyone outside of this clique emerges from it.

At Davos 2014, held in January, the theme was "The Reshaping of the World," and in fact, inequality was on the agenda. The Daily Beast's Christopher Dickey reported on how seriously the matter was taken:

Once the conference was in full swing, few people talked, and even fewer seemed to care, about inequality. Indeed, they appeared to be living it, loving it and laughing about it. Without question the most popular video on laptops and iPads was Jon Stewart's  segment on the Daily Show about the hypocrisy of the event. Citing the stunning statistic that 85 people on this planet control as much wealth as 3.5 billion, Stewart said, "Jesus [pause] would not be very happy about that."

Political scientist Samuel Huntington coined the term "Davos man" to describe this special breed of stateless elite for whom nationhood has withered away — much like the rest of the world does at these hyperinsular celebrations.

The reality is that sea change in our understanding of a fair or inclusive global economy will not come from within Davos, or because the WEF's experts suggest that it's a nice idea. These institutions are bellwethers; their concern has surfaced because that's simply the way the wind blows. They know that the global economic downturn is heavily tied to the waves of dissent the world has encountered in recent years (the Arab Spring, the tea party, Occupy Wall Street and so on). They know that Thomas Piketty's tome on how capitalism manufactures inequality broke sales records and forced counterarguments in the Financial Times. Inequality as vice is an idea whose time has come.

But Foreign Policy reports that a vast majority of business executives still find that "government overregulation" is the No. 1 issue facing the business world. The WEF and its conferences cannot expect to fulfill their goals if the society they cultivate remains so entrenched in status quo ideas about political economy. Otherwise inequality chat is just the latest way to pass the time between glasses of champagne.