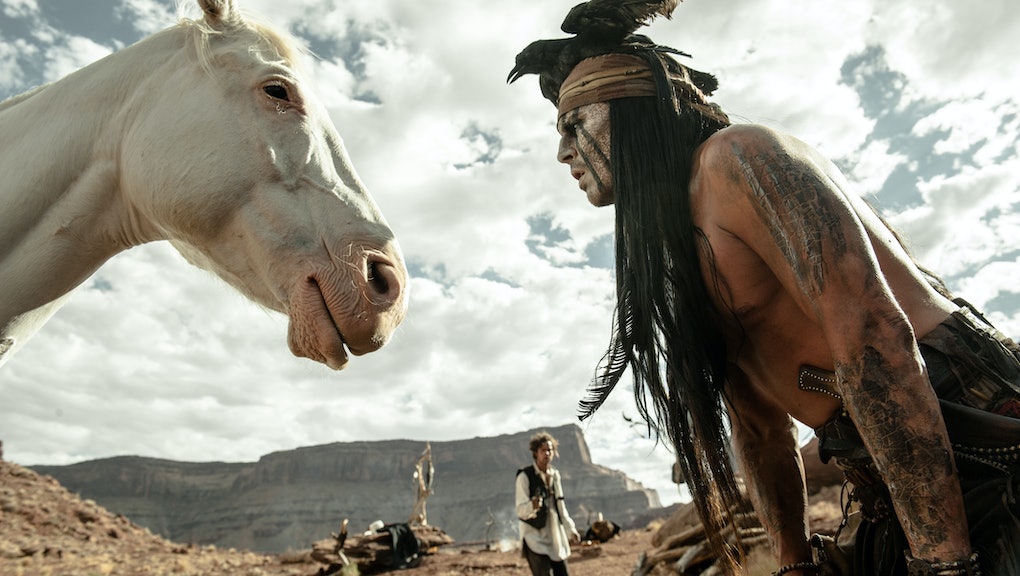 If the Bechdel Test Existed for Native Americans, Here's How Many Films Would Pass

The news: On Sept. 17, the MacArthur Foundation awarded Allison Bechdel a $600,000 "genius grant." The cartoonist is best known for popularizing the Bechdel Test, a remarkably basic set of criteria used to determine "gender equity" in TV and film.

Much has been made about how few productions pass it, and it's easy to see why. Here's all it asks:

1)    That a film/show feature at least two female characters

3)    About something other than a man

Not a lot, obviously.

But what if we applied this test to racial minorities?

Considering recent findings on the financial benefits of ethnic diversity onscreen, it seems prudent to invite other underrepresented groups to the conversation. A quick glance at Hollywood's output reveals one demographic losing by a wide margin:

Background: The Washington Post points out that just half the latest crop of Best Picture Oscar nominees passes the original Bechdel Test. Yet sadly, when compared with Hollywood representations of Native peoples in film, the industry emerges looking much, much worse.

Earlier this month, Adrienne Keene of Native Appropriations proposed via Twitter that a Native version of the Bechdel requires:

3)    About something other than white people

By a preliminary count, here's how many Hollywood film productions from 2014 — it's almost December, mind you — pass this version of the test:

Yes, zero. Keene claims that even older films featuring prominent Native characters fail this test, from Dances with Wolves to the much-maligned Lone Ranger reboot ("no surprise there"). But the problem is bigger than just underrepresentation — we're talking about the complete and utter omission of a culture.

Not only are there no Hollywood films this year where two indigenous characters discuss something besides white people, you'd be hard-pressed to find a movie where a Native American appears at all. In his 1999 comedy special Bigger and Blacker, Chris Rock spells out the dilemma in his typically pointed way.

The next question: Indeed, in this context, it seems relevant to ask, "When's the last time you've seen two Indians?"

The joke clearly hints at the dramatic (and intentional) reduction in the American Indian population since Europeans invaded in 1492. And while it certainly perpetuates the notion that Natives are a dying people — despite the veritable revolution around indigenous pride and culture we're currently experiencing — it does fit perfectly with conversations around Native representation in Hollywood.

Where the so-called "Golden Age of Westerns" in the 1950s saw an abundance of "Indian" characters in horridly stereotypical roles, nowadays Hollywood seems to have replaced that ethos with a complete failure to depict Native peoples at all.

And while you could say the same about many other groups — black Americans, Hispanics, Asians — the difference is that each of these has a relatively viable, semi-mainstream cinema of its own (even if much of it exists outside the United States).

For Native Americans, it's a different story. The valiant efforts of contemporary indigenous filmmakers and festivals don't change the fact that Hollywood still refuses to give Native peoples a fair shake — or any shake at all.

It's time for a major policy shift. Hollywood has shut out Native voices for far too long, and it's getting more intolerable by the minute.