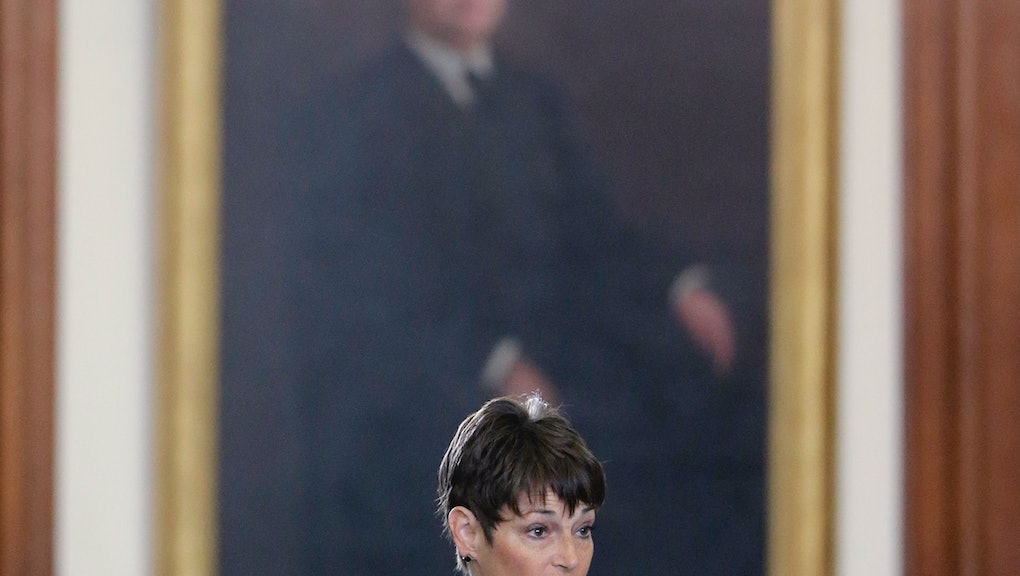 A Texas Lawmaker Just Proposed a 'License to Discriminate'

Texas state Sen. Donna Campbell filed a bill on Monday to amend the Texas constitution to enable businesses to fire LGBT employees and turn away LGBT customers, solely because of their sexuality.

The bill is meant to "protect religious freedom," according to Campbell, but critics call the measure a "license to discriminate," since it would place employer's religious beliefs above the rights of LGBT employees and customers and strengthen existing protections for businesses that discriminate because of their religion.

This isn't Campbell's first attempt to pass the Restoring Religious Freedom Amendment either. She proposed it last year and drew criticism from both sides of the aisle. This version is almost identical to the last.

Part of a larger movement: While Campbell's repeated attempts to pass this legislation in Texas are undoubtedly alarming, what's more alarming is the fact that this isn't an isolated incident. Five other states tried to pass similar proposals this year, although none succeeded.

Moreover, 29 states don't even need to worry about passing such amendments — it's already legal for employers to fire someone for their sexual orientation. This map from the Huffington Post shows which states don't consider sexuality or gender identity to be protected under nondiscrimination laws:

The fact that LGBT employees can be fired for their sexuality will come as a surprise for many Americans. A Huffington Post/YouGov poll conducted last year found that "69% 'think that firing people for being gay is illegal.'"

Think again, America. As ThinkProgress so poignantly puts it, since when did "their religious convictions about sexuality trump every else's civil rights against discrimination"?

Anti-LGBT business owners have refused to serve these customers before. ThinkProgress reports that it's happened recently in many states, including Kentucky, Hawaii, Oregon, Vermont, New Mexico, Iowa, Colorado and others.

Essentially, Campbell wants to legitimize this sort of behavior with the law. Despite the onslaught of criticism that Campbell got last year for her first proposal, she's not backing down.

According to Campbell, the amendment "provides a necessary layer of protection from overreaching governments that engage in acts of prejudice meant to intimidate Texans of faith from expressing their deeply held religious beliefs." Following from Campbell's logic, it's discrimination to not allow a shop to kick a customer out of their shop for their sexual orientation, or for someone to lose their job because of whom they date.

For someone so concerned about protecting freedoms, Campbell certainly seems to be picking and choosing who gets those freedoms. When ensuring someone's freedom necessitates taking away someone's job or freedom to frequent a public place, something doesn't seem quite right.

Here's hoping lawmakers realize that again with the legislation's second appearance. That this conversation even happened a first time is absurd enough.