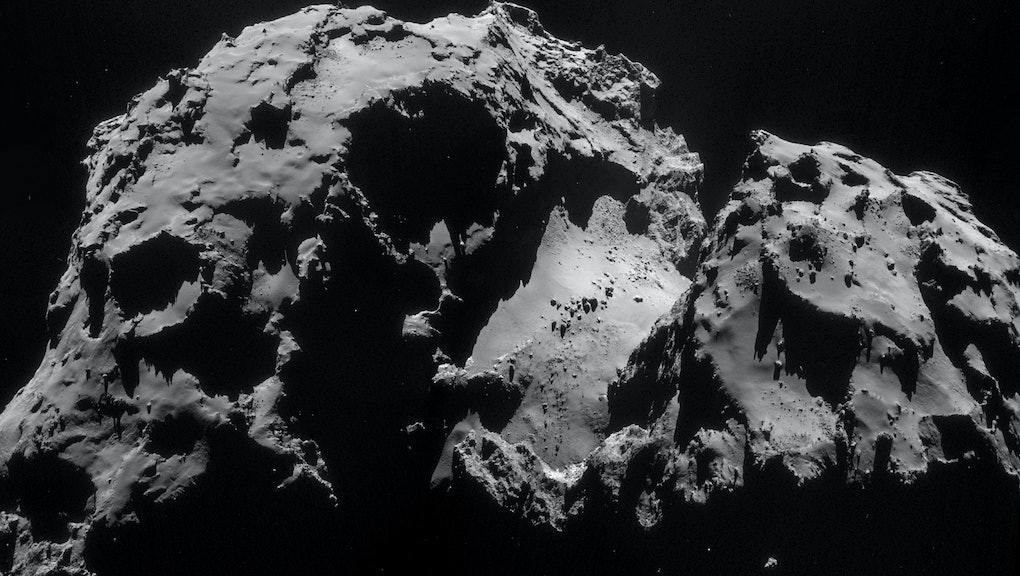 Thanks to the European Space Agency's (ESA) Philae probe, mankind can see the surface of a comet — a place humans have never laid eyes on before.

As Mic reported Wednesday, the Philae space probe jettisoned from the larger Rosetta probe, which orbited the comet 67P/C-G, landing on the surface of the comet in the first encounter of its kind in the history of space flight. But, as Vox notes, Philae's landing was less than ideal. The ESA had been aiming for a smooth patch of the comet's surface, but the probe missed that zone by more than half a mile. Philae now rests on cavernous, rocky terrain that's difficult for it to balance on. Even worse its harpoons, which were supposed to aid in stability by anchoring Philae to the surface, didn't deploy, meaning that the probe is now sitting untethered on the surface of a comet traveling at 84,000 miles per hour.

As if that's not bad enough, Philae is resting only on two of its three legs, and only one of its solar panels is getting any sunlight thanks to the new landing zone, limiting its potential operation time of 64 hours. To sum up: Philae is 250 million miles away from home and on the wrong side of the galactic tracks, with limited energy, nothing tethering it to 67P/C-G's surface and a wounded leg. Ouch.

But before Philae becomes officially lost in space, it sent out this spectacular photograph from the surface of the comet:

ESA scientists had hoped Philae could use its drill to perform a geological survey of 67P/C-G. After all, determining the 4.6 billion-year-old comet's chemical makeup would unlock truths about the formation of the solar system. However scientists are iffy about using Philae's drill, worrying it could tip the probe over, "killing" the probe and ending the mission. Still, the lander is capable of doing some work; it's currently mapping the comet's interior via radio waves. And, of course, it can continue taking more of these stunning photographs.