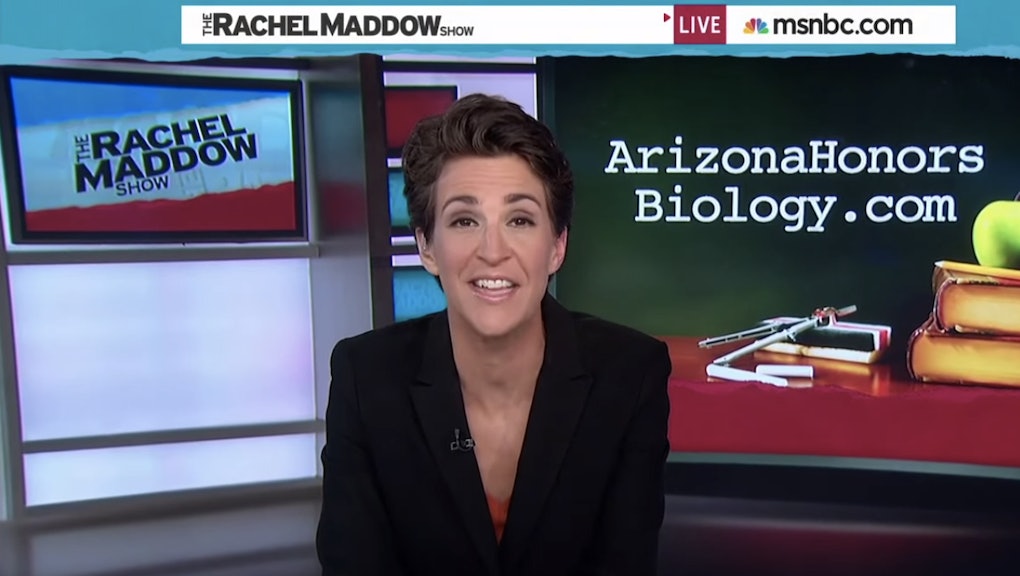 Rachel Maddow knows that knowledge is power — and she's making sure that the tea party doesn't take us back to the Dark Ages.

As she's detailed variously on her show, a tea party-led school board in Gilbert, Arizona, recently voted to literally tear out two pages in the district's high school biology books pertaining to abortion. Thankfully, this month, those tea party members were voted out of office, but they have suggested the pages will be removed before they leave office in January.

Luckily for science (and sex ed), Maddow has taken the matter into her own hands. The MSNBC host and her team has created a special website, ArzonaHonorsBiology.com, that includes the banned textbook pages to help students inform themselves about contraception, abortion and reproductive justice in general when their own schools fail to do so.

"If the Gilbert, Arizona, school board does decide to go ahead with a stealth plan to start ripping the pages out of science textbooks... I think we've got it covered," Maddow said. "High school kids of Arizona, if they do steal the stuff out of your books, ArizonaHonorsBiology.com is where you can get it again. Arizona may be conservative, but Arizona, you are still part of the United States, and you can't pretend some parts of biology don't exist because they make you feel oogy. You can try, but you cannot get away with it."

Clearly, Maddow understands that the Internet (for the time being) is a democratic forum that offers free, and, in this case, scientifically factual, information. Knowledge cannot be destroyed in the age of the Internet.

What is disappointing, however, is the ongoing conservative effort to shut down the dissemination of information, particularly in public schools, where the entire objective is to present children with a wealth of knowledge and teach them the skills to be critical thinkers.

This attack on learning isn't only happening in Arizona. As Anna Merlan writes at Jezebel, "Even if the books are saved in Arizona, we still have Texas, where the state Board of Education tries pretty much annually to excise abortion, evolution and sometimes any mention of the civil rights movement. (And because Texas is such an enormous market, their preferences have an outsize influence on the rest of the

Maddow's move symbolizes the larger cultural trend of the American education system being supplanted by "online education," and, it seems in some cases, for good reason. If kids can't rely on schools, they only need to tap on their phones to do their learning elsewhere.