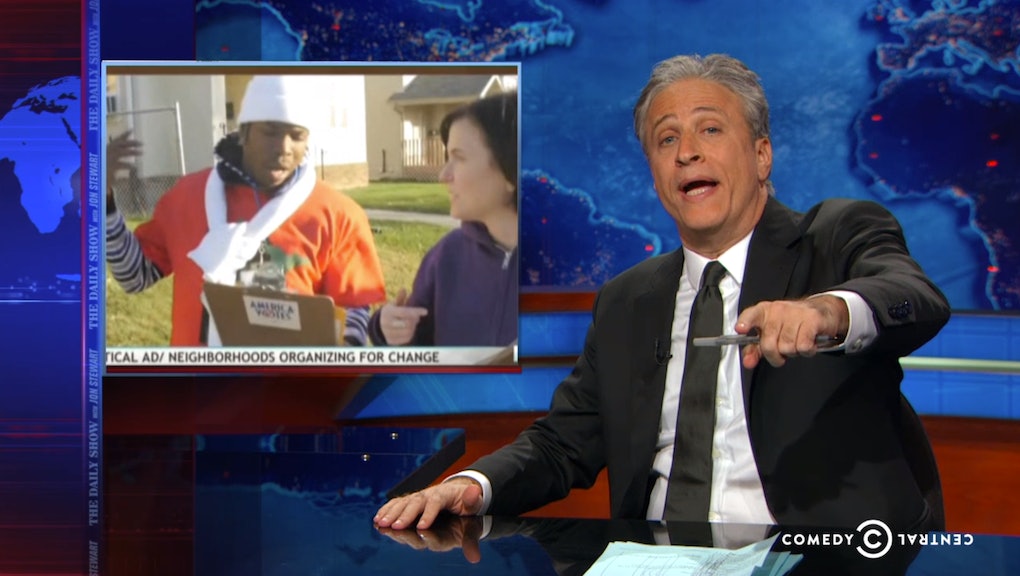 The news: A furor has gripped Minneapolis over the past few days after the city's police department leaked a photo to a conservative news station of Mayor Betsy Hodges allegedly throwing up "gang signs" with a convicted felon. The guy just happens to be black. Most stations would have investigated and reached the conclusion that the man in question, Navell Gordon, was genuinely just trying to do his job as an organizer for Neighborhoods Organizing for Change, and the "gang sign" in question was simply innocuous.

But KSTP reporter Jay Kolls instead turned it into #Pointergate. Based entirely on evidence from law enforcement sources, Kolls told Minneapolis that the mayor was "flashing a known gang sign" and putting the public "at risk."

On Wednesday, Jon Stewart weighed in on this simmering controversy, and he wasn't kind to #Pointergate supporters:

Stewart was barely able to recount the allegations without laughing, lamenting that "all this time I've been the lead-in for ... notorious gang member" Stephen Colbert:

"I think it's obvious what the message behind the mayor's pointing is," Stewart said. "To warn clown-ass bitches not to snitch."

What might really be going on: Instead, Stewart called out the police department for resorting to a blatantly racist tactic to get a leg up in their ongoing feud with the mayor. He accused them of playing up "innocent things that black people do that look suspicious" to conservative whites. Stewart suggested that the whole controversy was less about any police concerns over gang activity than an open letter the mayor issued in early October, saying "the department must get far more aggressive in rooting out bad officers."

In that letter, Hodges reported on progress towards long-term culture change in the department, including the appointment of a woman of color as police chief, body cameras for all officers, new training and policing practices and the firing of six officers who had "not met our city's standards for behavior" in just two years.

"This is a remarkable number for such a short period, especially considering that firing officers for misconduct is very challenging legally and contractually," Hodges wrote. "But it is good for community and it is good for the hundreds of officers who do their jobs well every day."

Apparently the head of the police union disagreed, which might explain the suspicious timing and credibility of this fake "scandal."

So the whole controversy is less about whatever hand signals the mayor and Minneapolis' "gangs" are tossing around than the hand signal the police department wanted to send to the mayor:

Well played, Stewart: Kolls, on the other hand, doubled down on his story, accusing his critics of being the real racists because they're so obsessed with race: