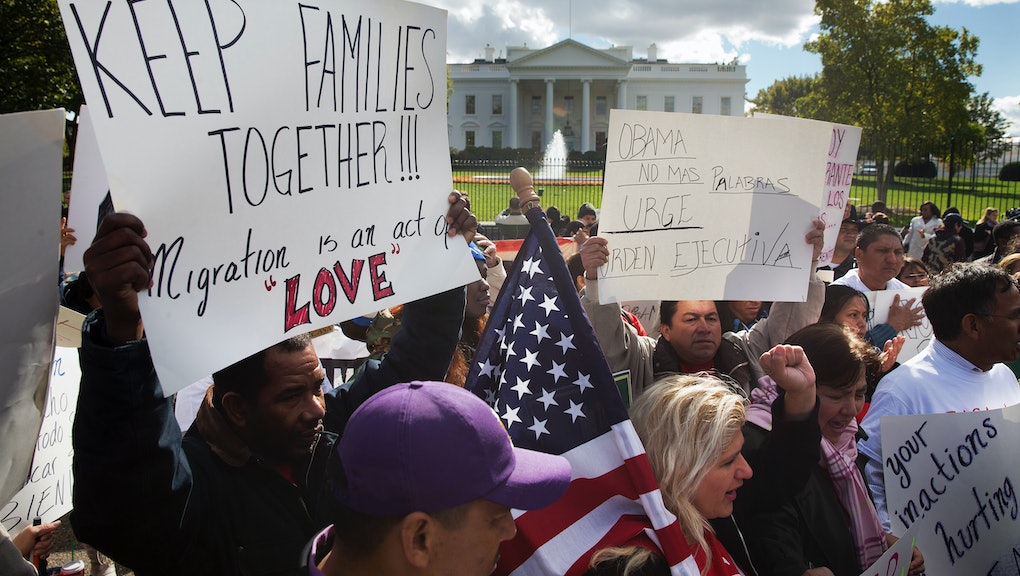 Details of President Barack Obama's long-awaited executive action on immigration are beginning to take shape, with the New York Times reporting that the wide-ranging plan will include a provision to stop the deportation of "up to 5 million" undocumented immigrants living and working in the U.S.

At the controversial core of the potential overhaul is a massive expansion of Obama's "deferred action" policy, which could offer undocumented parents of "American citizens or legal residents to obtain legal work documents and no longer worry about being discovered, separated from their families and sent away," according to sources confirming an earlier Fox News report, which put the projected number of immigrants affected at 4.5 million.

Obama was criticized by activists for putting off long-promised (or threatened, from the Republican perspective) executive action until after the midterms, apparently out of concern that swing voters would turn on Democratic candidates if he made a move before Election Day. Now he seems set to take a historic step in bringing millions of immigrants out of the shadows.

Part of a broader plan: According to Fox News, the action would also offer pay raises to immigration agents, offer a "50% discount" to the first 10,000 people who pay to apply for naturalization through the new process and launch a State Department-run program aimed at luring tech-savvy immigrants into the system.

White House spokesman Shawn Turner told Reuters that Obama "has not made a decision regarding exactly when he'll make an announcement about executive action to fix our broken immigration system, but he remains committed to taking action before the end of the year." Press Secretary Josh Earnest, pressed about the issue late Wednesday, said the president would act but also wouldn't offer a timeline.

The GOP reacts: Top Republicans are, predictably, infuriated. House Speaker John Boehner (R-Ohio), who said at a post-election press conference that Obama would "poison the well" with Congress if he pursued unilateral action, is reportedly considering adding a provision to the new budget bill that would block any of that money from being used to carry out the president's order, if given.

Because Senate Democrats would surely block any bill with those kind of constraints — including one that funds the federal government — a stalemate could ultimately result in another government shutdown, despite soon-to-be Senate majority leader Mitch McConnell's pledge it will not:

Still, Sen. Ted Cruz (R-Texas) and other leading Senate conservatives say they will do whatever it takes to stop the White House plan.

"Our office stands ready to use any procedural means available to make sure the president can't enact his illegal executive amnesty," Catherine Frazier, a spokeswoman for the senator, told the New York Times.

The political calculation: Despite Obama's delay of the plan until after the midterms, Democrats were swept out of power anyway, so there isn't much of a political downside for the White House in making the decision to go forward now. Going forward, it could also be a boon to the party's 2016 presidential nominee, given that aspiring Republicans will be falling over themselves to voice their opposition to Obama's decision, and in so doing, a wonderful new opportunity is being offered to millions of immigrant families.

And that is the bottom line here. Obama waited. And waited. Then he watched as the Senate, with 68 votes, passed a comprehensive immigration reform bill last year, only to see it die in the Republican-controlled House. With the GOP set to take control of both chambers in January, any hopes of a legislative revival have been dashed.

The time for waiting is over. The time for action is here. Millions of hard-working men and women are banking on him and, now, it seems Obama is poised to deliver the goods.

This post has been updated to include Sen. McConnell's comments to reporters in a press conference Thursday.