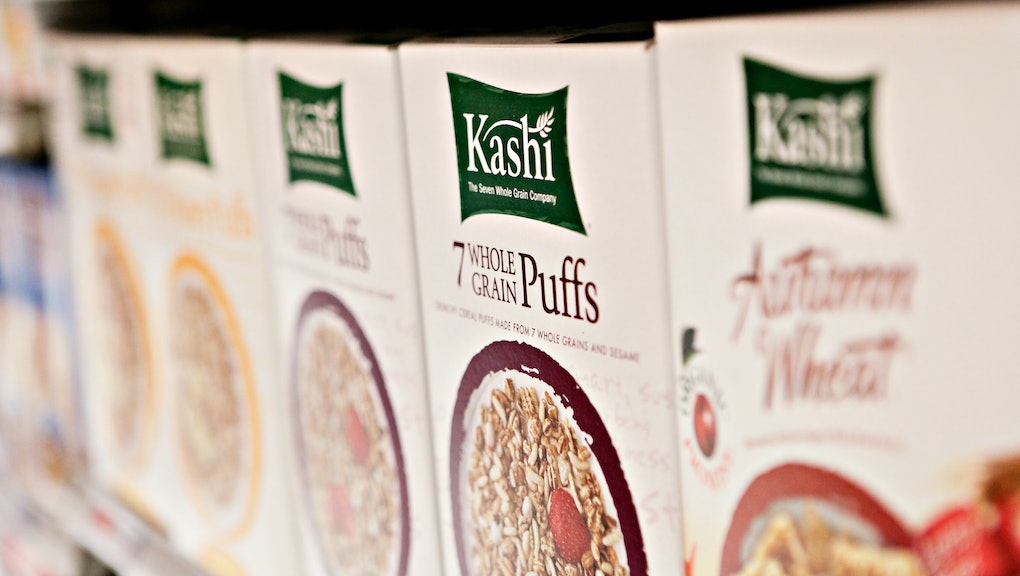 After eating nothing but cereal for a day, it's time for a trip to the grocery store for some healthy food. You start in the dairy aisle with POLLY-O mozzarella cheese and then a box of Stove Top stuffing, because it's never too early for Thanksgiving. As for snacks? Maybe some Athenos hummus or Planter's peanuts.

Our beloved healthy brands aren't always what they seem. The foods in your shopping cart all look different, yet they one thing in common: Each product is owned by Kraft. If you want crackers in an average grocery store, free will is nothing more than an illusion. Kraft, which split in 2012 to form a separate snack behemoth called Mondelez International, owns more brands than you realize, including Lunchables and Capri-Sun (better known as the foods that once made you the coolest kid in school).

Kraft isn't the only food company that owns countless smaller brands. There are seven key companies (eight with Mondelez) that created or bought a majority of the brands on the shelves: Nestlé is the undisputed king of frozen pizzas. They own DiGiorno, California Pizza Kitchen, Tombstone and Jacks. PepsiCo has cornered the market on chips, and competes with Coca-Cola (which owns Honest Tea and Odwalla) for soda and juice domination. Kellogg, the company that essentially invented cereal, owns everything from Kashi to Fruit Loops, plus vegetarian favorites like Morningstar Farms. In the frozen food aisle, Unilever has Ben & Jerry's, Popsicle brand and everyone's favorite faux butter, Promise. General Mills owns a little bit of everything else.

The big companies' new specialty: "healthy" brands. Below, a graphic compiled Philip Howard, a professor of food systems and agriculture at Michigan State University, shows the massive scale of acquisitions of organic food processors by big, non-organic companies. The likes of Nestlé, Kellogg and Mondelez, not to mention biggies like Coca-Cola and Mars, now have organic brands to their name.

The flowchart was created in February, but even in that time new conglomerates have gobbled up organic brands. Tyson completed a $8.55 billion merger with Hillshire Brands in July, and General Mills acquired Annie's Homegrown in September. Below you can see Mondelez (formerly connected to Kraft), which now owns Back to Nature and Boca Foods of Boca Burger fame. Kellogg had added Morningstar Farms, Kashi and Bear Naked to its stable.

Investing in a number of brands is a smart strategy for big companies — particularly as the demand for organic food booms. As more people are moving away from junk food toward health food, owning both Hamburger Helper and gluten, soy and dairy-free Lärabar — as General Mills does — is the best way ensure a company's financial health.

For consumers, buyouts are a different story. A buyout doesn't always mean a formerly healthy product will suddenly add calories, produce from halfway around the world or have GMOs — but it can. Once a mom-and-pop brand from La-Jolla, California, Kashi cereal was bought by Kellogg in 2000. By 2012, it stirred up controversy after a Rhode Island grocer discovered that the product, which branded itself as all natural, had started using GMO soy. Though "natural" has little legal meaning, consumers were outraged. As a result, Kashi is now providing Non-GMO Project verification on some of their products.

Silk Soymilk, bought by the nation's biggest dairy conglomerate, Dean Foods, in 2002, also tried to quietly shift their product from organic to "natural" without alerting customers. The organic products left were sourcing soybeans from China with low labor and certification standards. After considerable backlash, Dean Foods enrolled Silk products in the Non-GMO Project verification program and buys all their soybeans from North America.

On the other hand, not all corporate acquisitions result in changes to the food and brands we love. Ben & Jerry's might represent the best-case scenario for a brand with a wholesome reputation. They managed to retain an independent leadership board after their acquisition by Unilever. This has allowed them to continue being vocal advocates of hormone-free milk and GMO labeling, even as Unilever donated $467,100 to fight California's defeated GMO labeling bill.

But the new reality remains: Our favorite little brands aren't so little. Ben & Jerry's, with its hippie farmers and Vermont farm heritage, is now owned by a massive conglomerate, one that does not evoke the same virtuous, homey nostalgia the cloud-covered ice cream pints do. And while silencing Ben & Jerry's would have been a horrible PR move for Unilever, allowing the ice cream brand to go against its parent company served as an important reminder to consumers that the wholesome brands they love don't always have such wholesome parents.

So in an age of endless acquisitions, can we trust our favorite healthy and homey brands without knowing who actually owns them and what those bigger companies stand for? Not to mention, can we trust that the terms of a buyout haven't influenced a product's adherence to its original philosophy? Do we need contracts printed on the side of each package to know what's really behind our Lärabars and Kashi cereal?

Some consumers have been asking these questions — and answering them with their wallets. When General Mills announced it would buy Annie's Homegrown, some consumers decided to avoid the brand entirely. To those healthful shoppers who pay attention to who owns what, avoidance often seems like the safest strategy.

It's not just about ingredients — it's about "values." Even if the organic or GMO-free product remains unchanged after being acquired, there is still the matter of brand loyalty. Food choice isn't just about taste and cost but also about aligning our values the brands'. And to do that, it takes knowing whose products we're really buying when we go to the grocery store.

Fortunately, when it comes to corporate actions, allowing Ben & Jerry's to remain Vermont's kooky, outspoken ice cream barons is very different than hiding GMOs in a brand like Kashi. As long as companies can prove they're not misleading us by changing ingredients or product standards, it's not the end of the world to eat Annie's Macaroni & Cheese — even if it is owned by General Mills.

But for those who prefer their processed food to be organic, free of GMOs and family owned, those brands still exist. Amy's Kitchen, Clif Bar, Organic Valley, Nutiva — none have been scooped up by Kraft or Unilever... yet. Next time you're perusing the dairy aisle, you can feel good tossing any of them into that shopping cart.