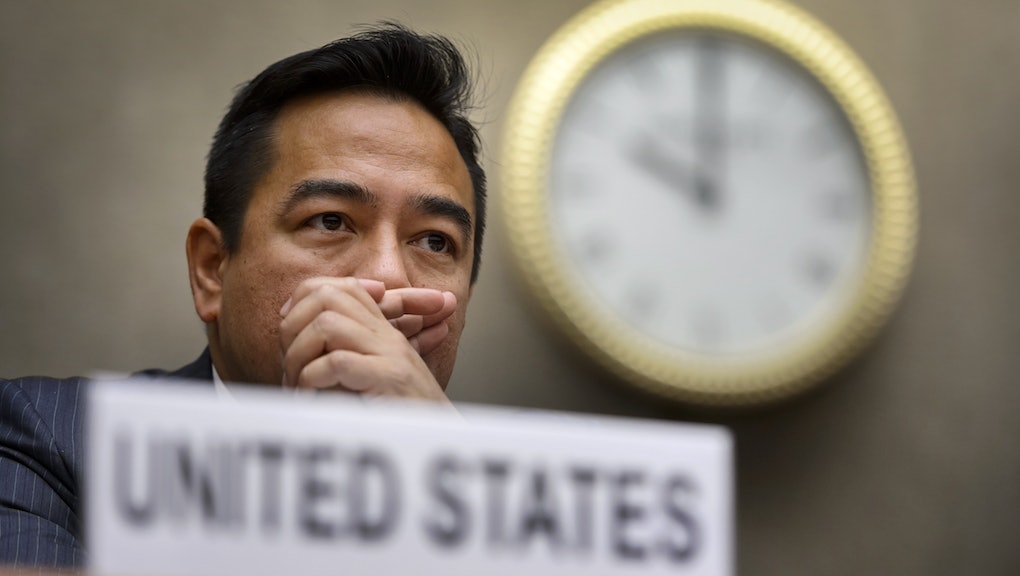 The U.S. Tells the World It's Officially Done With Torture—But Is It Too Little Too Late?

The U.S. made its most formal admission of torture yet to a United Nations panel in Geneva, telling the international community that "we crossed the line."

"The United States is proud of its record as a leader in respecting, promoting and defending human rights and the rule of law, both at home and around the world," Mary McLeod, the acting legal adviser to the State Department, told the panel, per the New York Times. "But in the wake of the 9/11 attacks, we regrettably did not always live up to our values."

It's not the first time an official has made this admission — President Obama said "we crossed a line," along with the much less carefully worded "we tortured some folks," during a speech about the CIA back in August — but it's the most official overture made on the international stage on the subject. And it was open for questions.

The response: This U.N. committee's job is to make sure the 156 countries that ratified the Convention Against Torture 30 years ago are still following it. U.S. officials argued that Bush-era torture policies are over and that the rules apply regardless of whether prisoners are kept in the country or abroad.

Italian committee member Alessio Bruni pushed U.S. officials on military detainment policies allowing prisoners to be kept to four hours of sleep a night, which he called "definitely insufficient for a majority of people." Bruni and others in attendance also grilled U.S. officials on Guantanamo Bay.

What it means: It's certainly not hard for the Obama administration to claim a break from the torture policies of the Bush administration, given that the latter weaseled around torture by calling it "enhanced interrogation," something the current president has decried. He also brought an official end to both of Bush's wars (though not an end to U.S. military presence in the Middle East).

But the Obama administration has failed to totally bring a close to the institutions of the "war on terror" established by their predecessors. Closing Gitmo is something Obama said he would do on the campaign trail in 2007, and despite numerous other declarations to the country, the prison remains open. That's not to mention the huge concerns over NSA spying and the continued use of drone strikes abroad.

It's clearly better for the U.S. to tell the world that it no longer tortures, either at home or abroad. But specific torture techniques clearly aren't the only foreign (or domestic) concern when it comes to to U.S. treatment of prisoners. A simple admission to the U.N. won't gain back all the credibility lost in the wake of the war of terror.