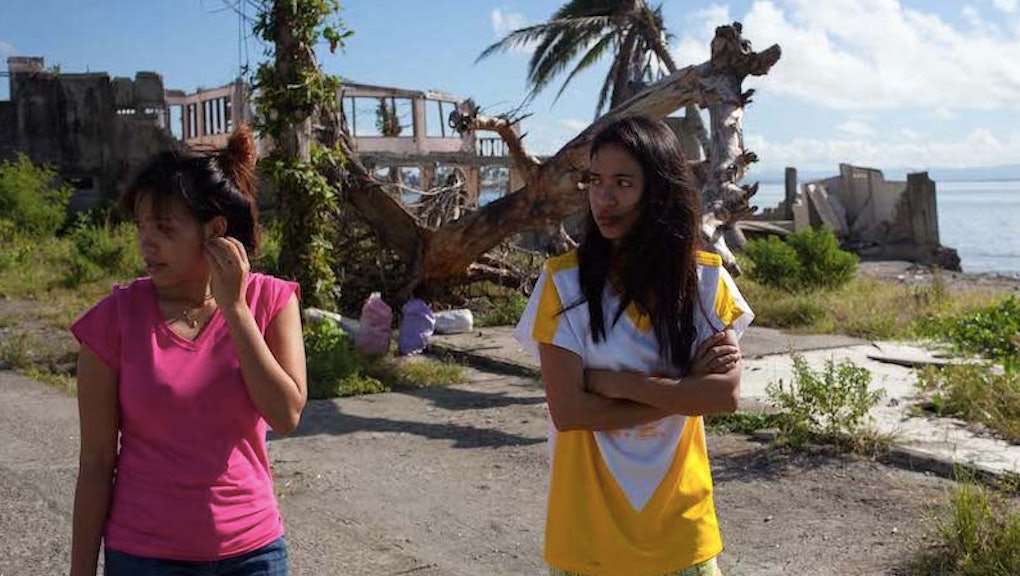 "Everything was black. You didn't know when you'd see the sun again," Divine Astorga recalled of surviving Typhoon Haiyan with her sister Divina and other family members in the central Philippines on Nov. 8, 2013.

One year after the Category 5 super typhoon ravaged her hometown of San Jose in the outskirts of Tacloban, leaving more than 4 million people displaced across the region, residents are still waiting for the Manila government to make use of millions of dollars in aid money.

While delays in recovery efforts persist, the trauma from the unprecedented disaster lives on in the hollow, ruined structures and memories of those who survived the fourth most intense tropical cyclone ever recorded.

When I met them six months after the typhoon, the Astorga sisters were not waiting for the government's promises to come into fruition. Instead, they were pursuing employment dependent on the influx of aid development workers into the city.

In the week following the typhoon's landfall, the United Nations and United States, which maintains a military base in the northern Philippines, dispatched emergency response teams to coordinate life-saving efforts: shelter, food, water and medical care.

Foreign governments and aid groups pledged $600 million. Only $14.3 million of those donations have been accounted for while aid groups continue to maintain temporary shelters for the hundreds of thousands displaced, according to the UN agency tasked with coordinating relief efforts.

When the sisters weren't seeking jobs in the nearby city, they were making and selling frozen popsicles to neighbors. They used the profits to pay for transportation fare and fees in Internet cafes where they searched for job opportunities and print resumes. Divine, 22, also sewed clothes to accompany religious figurines that the sisters sold at festivals.

Divina, 27, had been looking for work since January. She had been preparing to migrate to Australia to join two older sisters who settled in Sydney, but because the storm washed out most of their belongings, including her birth certificate, passport and immigration forms, her plans to migrate were stalled.

"We're back to zero," Divina said. "But step by step, we're recovering."

In the afternoons, after they finish errands at home, Divine and Divina walk along the scenic coast facing the Pacific Ocean, amid debris and recovery efforts.

More than 8,000 people lost their lives during the 235 mph winds and tsunami-like storm surge. Across the city, volunteers from the city's health department were still uncovering corpses underneath ruined structures.

In May, soldiers from South Korea visited a shelter site where hundreds of people displaced by the typhoon live. The soldiers sprayed mosquito repellent along rows upon rows of bunkhouses, a break from the monotony inside the camp, as children laughed and played in the suffocating fog.

In March, Divine received her degree in marketing from a local university. The commencement ceremony happened two months later because of ongoing recovery efforts, but despite the delay, the ceremony restored a sense of normalcy to the lives of many students who survived the typhoon.

The sea where their father fishes for a living is a little more than 40 meters from their doorstep.

At the second floor balcony of the Astorga's home, Divine recalled climbing to the rafters during the storm.

"People were swimming and coming in through the second floor window just to enter," Divine said. "My sisters who were abroad felt double the uncertainty that we felt. They had no idea if we were dead or alive."

As people around the world commemorate the one-year anniversary of Typhoon Haiyan with candlelit vigils for those who perished, it is also important to remember survivors like the Astorga sisters. Despite the government's complacency and lack of action, they are picking up the pieces one day at a time.