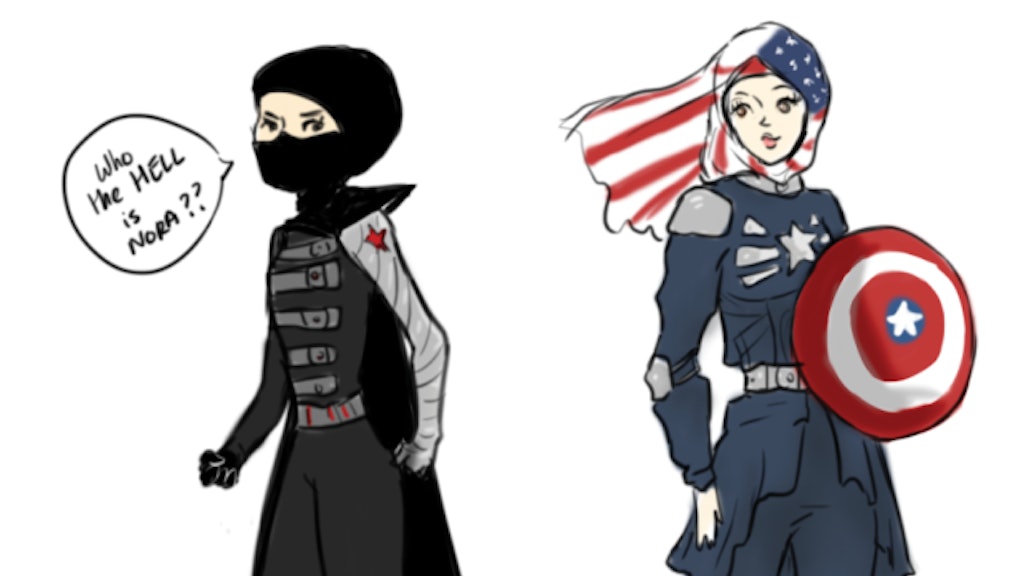 One Muslim Teen Is Challenging America’s Idea of a Superhero, One Hijab at a Time

In the increasingly diverse comic universe, Muslim-Americans remain consistently underrepresented. But one teenager is working to rectify the situation by reimagining some of America's most beloved heroes with one noticeable addition: a hijab.

Seventeen-year-old artist Nour Saleh spoke to Mic about her project. The story behind the uniquely drawn cartoons, which depict everyone from Spider-Man and Wonder Woman to Katniss Everdeen, began on Tumblr, where Saleh participated in the site's Draw Yourself Challenge. Soon, her own followers urged her to do more. They suggested characters or movies for Saleh to draw herself into.

"People liked that I kept my religion incorporated," she said. "So they asked for more."

Encouraged by the support, Saleh kept going. "I've drawn 15 so far, most of which were Marvel characters. People liked Marvel characters best because they had more complex designs, and were curious to see how I could change them to fit my clothing style." Her favorite drawing has been of legendary archer and Avengers team member Hawkeye.

Saleh said the public's positive reaction is somewhat surprising. Although she has faced some negativity, it's been minor.

"A lot of people told me they felt it had great meaning, which I had not considered when I was drawing them, and that it apparently inspired them," she said. "It was just interesting because when I drew them I had nothing in mind, and people told me they thought it had good representation."

Although historically difficult, finding innovative Muslim characters in comics has become easier. Craig Thompson's Habibi comic positively addresses Arab culture and language, although it has faced some criticism for fetishizing the "exotic" quality of being Arab.

Meanwhile, The 99 has been lauded for its nuanced and multifaceted characters and storylines, while a smaller comic, Superhanallah - An American Muslim Webcomic, focuses specifically on Muslim-Americans. In the more mainstream Marvel universe, the new Ms. Marvel, Pakistani-American teenager Kamala Khan, received attention when she was announced last year. With aspirations to change the world, Kamala's introduction signals the latest example of the comic industry's evolution when it comes to nuanced portrayals of the Muslim-American experience.

Saleh's cartoon challenge and the ensuing support point to a future both on and off the page where Muslim Americans of all professions, not just superheroes, are accepted and encouraged.

All images courtesy of Nour Saleh