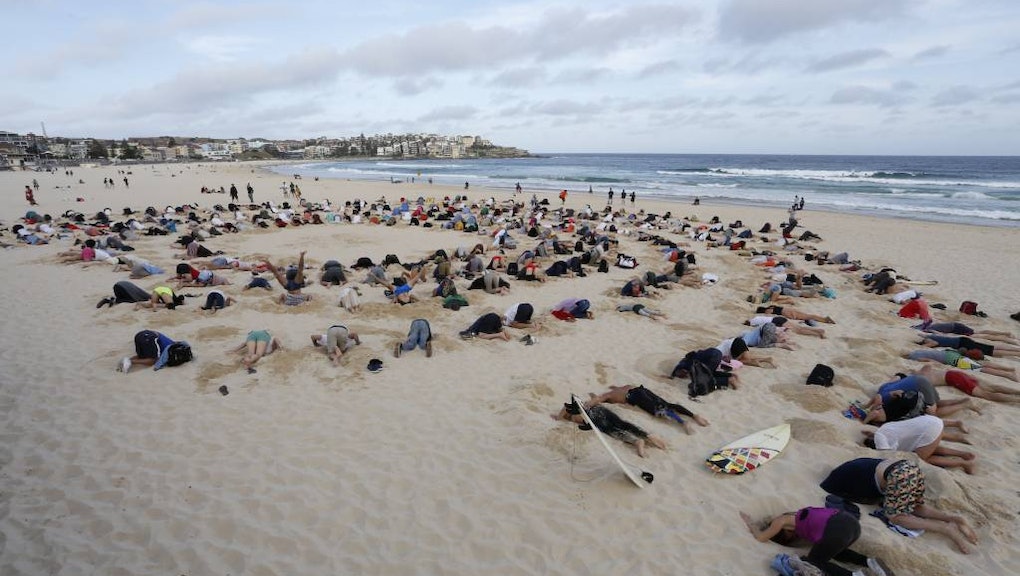 We'll hand it to you, Australia: You definitely know how to make a statement.

On Thursday afternoon, more than 400 protesters gathered together on Sydney's Bondi Beach to protest climate change. Their method of choice? Sticking their heads in the sand for two minutes, a satiric take on the Australian government's woeful inaction on environmental issues.

The Bondi Beach protest was the second "head in the sand" protest held in Australia this year. The first, held in September, took place in Queensland and involved about 80 protestors. Besides having a greater number of participants, Thursday's stunt was notable for its visibility — Bondi Beach is one of Australia's most famous spots, and has the power to attract a lot of attention.

The protest occurred on the eve of this year's G-20 summit, which will be held in Brisbane on Nov. 15 and 16. It's the first G-20 summit in years that won't address climate change — Australian Prime Minister Tony Abbott claimed he wanted the meeting to focus on other things, such as "economic growth," Mashable reported.

"I'm hoping the Bondi event will send a huge message to our government and the G-20 that they can no longer hide their heads in the sand over the climate change planetary emergency," George Hirst, who organized the first protest, told Mashable.

Abbott is well known for his disdain for climate change science; he once called it "absolute crap" and has opined that coal is "good for humanity." He also appointed a climate change skeptic to handle the country's renewable energy targets.

In a message posted on climate activism website 350.org after the protest, organizer Eden Tehan wrote:

With world leaders arriving for the G-20 Summit in Brisbane, a heads in the sand event seemed a great way to let the world know that most Australians don't agree with our government's inaction and think we should join the global effort reduce emissions, stop new fossil fuel projects and ramp up renewable energy.

Both the summit and the protest follow the announcement of a historic deal between China and the United States to reduce greenhouse gas emissions.

"Obama's on board, Xi Jinping's on board, everyone's on board except one man," yelled one protester on Thursday. Then came the callback: "Tony Abbott!"