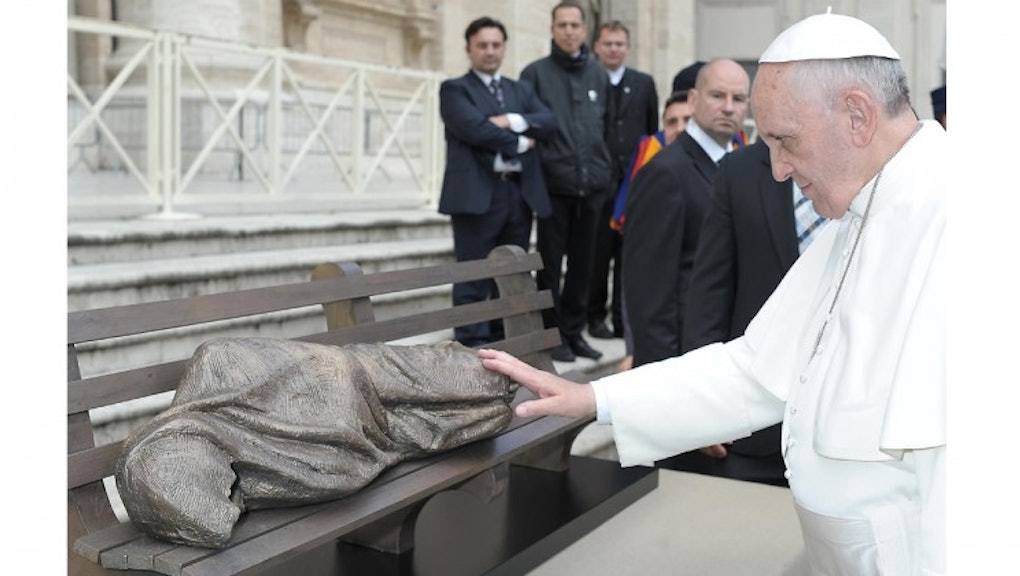 The news: One of the Vatican's most well-known landmarks is about to get a makeover.

On Thursday, the Vatican announced that Pope Francis plans to build showers for the homeless under the colonnade of St. Peter's Square. Next year, work will begin to install three showers to enable Rome's homeless to wash themselves just a few meters from St. Peter's Basilica and the pope's relatively modest accommodations in the Domus Sanctae Marthae.

The background: This is just the latest charitable move by Francis, who has fought to revamp the Church's image since assuming the papacy in March 2013. Other big charitable firsts under Francis include renting the Sistine Chapel out for a charity concert, while his tenure at the Vatican has been marked by a renewed effort to expand the number and quality of charitable services it provides. Earlier this week, Francis asked leaders of the Group of 20, a collective of industrial and emerging-market nations, to take responsibility for the "poor and marginalized."

The Australian Broadcasting Corporation reports that the showers came at the urging of Konrad Krajewski, who serves as the pope's almoner, the Vatican's top official for helping coordinate the Catholic Church's charities for the poor. Krajewski met a homeless man on the Via della Conciliazione, which leads to St. Peter's Square, and had the following exchange:

"He told me that he was turning 50 that day and that he had been living on the street for 10 years," Mr Krajewski recalled in an interview with Italian newspaper La Stampa.

The new showers were also made possible through donations from Italian tenor and singer-songwriter Andrea Bocelli and free labor from a local construction company. "It is not simple, because it is easier to make sandwiches than run a shower service," Krajewski told Religion News Service. "We need volunteers, towels, underwear."

The showers are not intended to form the basis of a community center or allow for a permanent homeless community in the Vatican. Rather, Vatican Insider reports, they will serve as "a diffused service for the people in the neighborhoods of a city where public restrooms are closed and the homeless cannot go into cafés to use the toilet." There are about 8,000 homeless people in Rome, each of whom deserves a decent place to eat and clean themselves every day.

Let's compare and contrast: Laws against feeding the homeless now exist in over 50 American cities, while bans against sleeping in cars or in public have grown dramatically in recent years.

So kudos to the pope for continuing to insist that the problem of homelessness can be managed in a civil, respectful way, putting to shame those responsible for anti-homeless legislation in American cities and tactics like placing road spikes where the homeless might sleep. The Church is far from perfect, but at least Pope Francis is committed to treating the destitute as people.